TNA Against All Odds – Scott Steiner Vs. Petey Williams (Case Vs. Case Match) 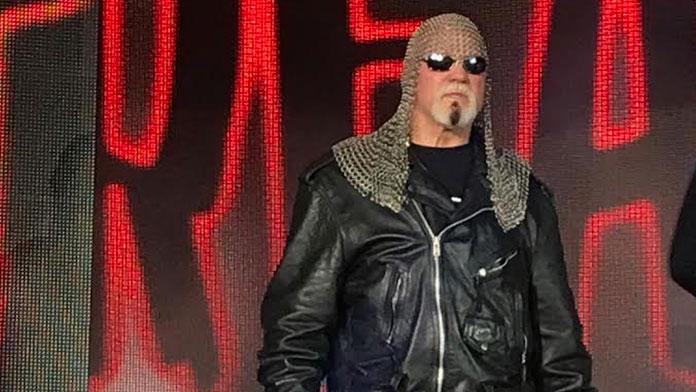 – Scott Steiner defeated Petey Williams in a “Case vs. Case” Match. Each time Steiner went up to the top ropes to pose, Petey went up on the opposite top rope and posed with him. Both do a pose down, lock up and Steiner pushes Petey to the corner. Steiner then takes out Petey with a big hip toss and the crowd cheers loudly. Petey goes to the outside, Scott follows, Petey rolls back in and does some sit-ups to mock Steiner. Steiner then gets in, takes out Petey, looks to drop an elbow, but Petey rolls over and does some push-ups. Petey finally takes out Steiner with a few kicks to the body followed by a spinning heel kick. Steiner then responds right away with a huge overhead belly-to-belly suplex. Steiner sets up Petey in the tree of woe in the corner. Steiner pulls back on the chin of Petey on the outside and then gets back in when Petey falls down. Steiner takes out Petey with a clothesline, drops an elbow and then does some push-ups as the fans cheer. Steiner then puts Petey up on the top rope and hits another big overhead belly-to-belly suplex. Steiner covers Petey, but plays with him and pulls him up by his hair. Steiner lands some powerful chest chops on Petey in the corner. Steiner puts Petey up on the top rope again, puts him on his shoulers and connects with a huge fallaway slam! Another cover by Steiner and he again pulls Petey’s shoulder up to break the pinfall playing around even more. Steiner leaves the ring to grab the two cases. Steiner puts the case with his name on it in the turnbuckles. He puts the case with Petey’s name in the other corner. Steiner goes to launch Petey face first into the case, but the referee stops it. Petey then takes advantage and sends Steiner into the case. Steiner bounches off and falls back. Petey covers, but Steiner kicks out. Petey then takes out Steiner with a huricanrana! Petey goes for the Canadian Destroyer, but Steiner reverses into into an Alabama Slam. Petey kicks out after a pinfall attempt and Steiner can’t believe it. Petey drives his knees into the face of Steiner, jumps off the top rope with a big body press, but Steiner kicks out. Petey then applies the Steiner Recliner, but Steiner gets to his feet and slams Petey into the corner. Petey counters into a big Tornado DDT on Steiner. Steiner gets in a low blow on Petey with the referee not looking. Petey catches Steiner with a low blow kick with the referee missing that as well. Petey throws Steiner face first into the other case and connects with a dropkick from the top rope. Petey goes to cover, but a very tall black woman jumps up on the ring apron and poses for Petey. This distracts Petey allowing Steiner to put Petey on his shoulders and drop him back in the electric chair to get the pinfall.

– Backstage, Jeremy Borash previews the rest of the card when Kurt Angle cuts him off. He asks Borash to cut the announcer deal and asks for help with Karen. Borash said he has a “how to” book coming out on quote “how to bang broads.” Kurt asks him what he should do. Borash reminds Kurt that this Thursday is Valentine’s Day and that he should renew his vows with her. AJ Styles shows up as they act out what should go down on Thursday and Styles walks off. Kurt yells at Styles that it wasn’t what it looked like.