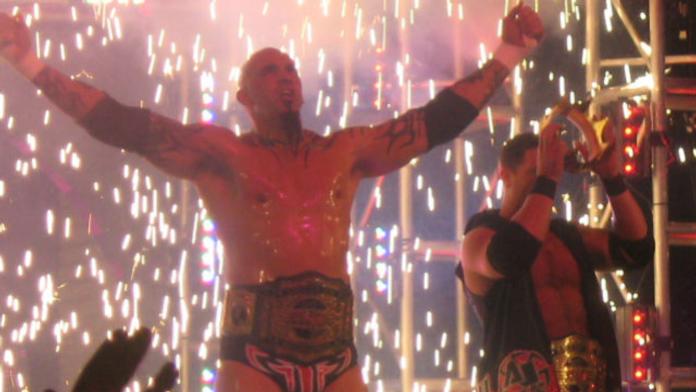 – Before the match started, AJ Styles got on the mic and talked about Tomko ignoring him and joining sides with Christian Cage. Styles said he wants an explanation. Tomko tells Styles to get focused for the match right now since they are facing one of the best wrestling families of all time.

– AJ Styles & Tomko defeated BG James & “Bullet” Bob Armstrong to retain the TNA World Tag Team Championships. Jeremy Borash did ring introductions for both teams. AJ Styles and BG James begin the match for each team. Each time BG gets in some quick offense, Styles reverses and gloats. BG finally takes out Styles with a big right hand and tags in Bob Armstrong. Both BG and Bob give Styles a big double chop. Bob takes out Styles with a big slap to the face and then tags in Tomko. Tomko tells BG to tag himself in and Bob refuses. Bob slaps Tomko. Tomko throws Bob in the corner and lands a few rights. Bob responds with a few chops and punches of his own. BG gets the tag and they take out Tomko with a double elbow. BG with a few pinfall attempts on Tomko and he then tags Bob back in. Bob chops Tomko a few times, knocks Styles off the ring apron, but Tomko takes out Bob with a big powerslam. Styles slides in covering Bob, but Tomko pulls him off. Styles gets the legal tag, covers Bob again, but Bob kicks out. Backstage, we see a shot of Kurt Angle watching the match and Karen is trying to get his attention. Back live, Styles takes out Bob with a kick to the back of the head. Tomko gets the tag and goes to work on Bob. Tomko misses a big boot in the corner on Bob as BG is back in. BG takes out Tomko and Styles with big shots. BG takes out Styles with a series of rights followed by his knee drop to the face. Tomko goes after BG, but Styles takes out Tomko off the springboard forearm. BG gets Styles up for the Pumphandle Slam, connects, covers, but Styles barely gets a shoulder up. BG leaves the ring and goes after Tomko who is hitting Bob. Back in the ring, Styles takes out BG’s knee with a springboard dropkick. Tomko and Styles take out BG with the Tornadoplex (as Don West called it) and got the pinfall to retain the TNA World Tag Team Titles.

After the match, Kip James hits the ring to check on BG James. Bob Armstrong joins them checking on BG as well. BG is favoring his knee in pain. We see a shot of AJ Styles celebrating, but Tomko gets in his face telling him to focus. Kip and Bob then help BG out of the ring.

– Backstage, Karen Angle said she is sick of doing all of Kurt’s dirty work. She said all he cares about is making people like AJ Styles and Tomko happy. Karen asks Kurt when was the last time they did something romantic together. Kurt asks why she is doing this right now of all times. Karen walks off and Kurt calls her a b—h.

– Back live, Mike Tenay and Don West review the card for tonight.