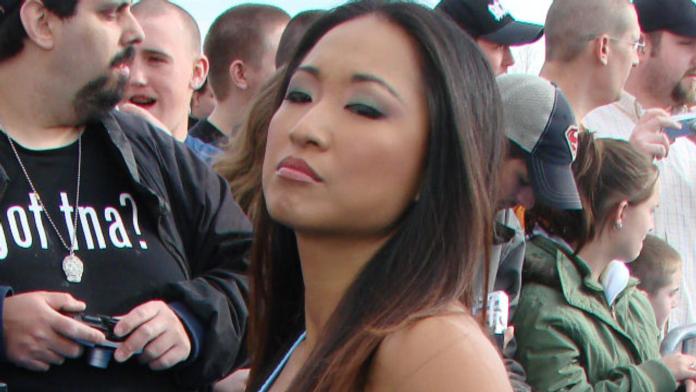 As noted moments ago, Gail Kim wrote on her Twitter today that she quit WWE as of Monday.

“Hey I just wanted every1 to know that I officially quit WWE on monday,” she wrote minutes ago. “So thank u wwe fans! This won’t be the last …”

As noted earlier this week by Ryan Clark, during the No. 1 Contender’s Diva Battle Royal on Monday’s RAW, Kim eliminated herself from the contest by hastily sliding under the bottom rope after striking Alicia Fox.

The WWE Diva was asked through Twitter to comment on her peculiar action; she admitted to leaving the match on purpose. Her reason behind the move was that she “was just checking to see if anyone was paying attention.” She added that no one backstage noticed, calling it “sad,” yet also “very amusing.”

She added further comment this morning to defend her actions, writing: “oh and also on the contrary, I wasn’t being a mark 4 myself I was being a good employee when ur told to get out of the ring in less than a min.I just did it the fastest way possible:)so really I saved some time!”

The former TNA Women’s Knockout Champion also concurred with a follower stating that it’s shame that WWE doesn’t respect “true women wrestlers with talent.” She responded, “Yes it is a shame I agree. I know it’s a man’s world but the women are just as important!”

However, Kim denied speculation this afternoon that was trying to get fired.

She wrote, “Nooooo I’m not doing my best to get fired. Wrestling websites who like to make up news with their wild imagination…haha don’t believe it.”

Ryan Clark contributed to this article.