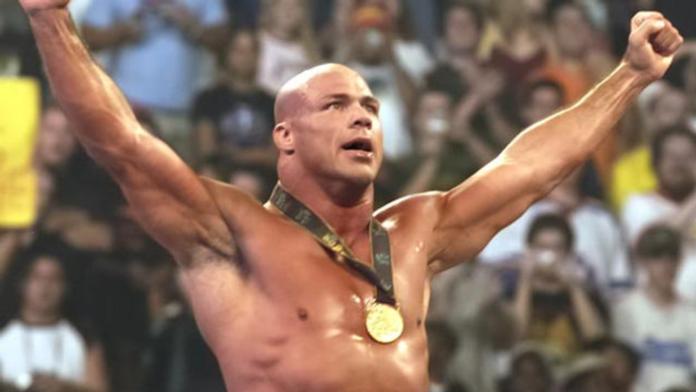 – JB is backstage with Bobby Roode. He asks what Roode’s relationship with Aces & 8s is. Roode takes offense and talks about what he’s done and about getting the World Heavyweight Title back. Roode says he will get it back tonight and prove that it pays to be Roode. Roode says he is a business man and his business tonight is the World Title. Roode says money talks and bulls–t walks, apparently referring to Aces & 8s.

We go to the ring and out first comes TNA Television Champion Devon, Doc and 2 masked men representing Aces & 8s. Out next comes the team of Kurt Angle, Wes Brisco, Samoa Joe and Garrett Bischoff. Joe rushes the ring and they escape to the floor.

Aces & 8s stall to start the match. Devon attacks Angle from behind and beats him down to kick things off. Devon beats Angle around the ring but he turns it around and does the same. Doc and Joe tag in and go at it now. Joe unloads on Doc and tags in Bischoff. Doc turns it around on Bischoff and takes him to the corner. One of the masked men tags in and beats Bischoff down. Garrett makes a comeback and works on the arm of the masked man. Garrett catches a big forearm shot and goes down. Garrett makes another comeback and tags in Brisco for some double teaming. The masked man blocks a bulldog and tosses Brisco to their corner. The other masked man tags in and takes control of Brisco until he hits a flapjack.

Joe tags in and unloads but ends up on the floor as Aces & 8s beat him up some. Devon tags in and hits a bunch of right hands in the corner. Doc comes back in and keeps Joe down on the ropes. One of the masked men comes over and chokes Joe with the middle rope while the referee is distracted. Doc with a big suplex and a headlock on Joe. Joe fights out but Doc drops him with a big back elbow for a 1 count. Doc takes Joe back to the corner and tags in Devon. Devon takes Joe to the mat and works on his neck now. Joe fights up and out but Devon hits the elbow to the face for 2. The bigger masked man tags himself in and keeps the assault on Joe going. Joe goes back to the corner and gets beat down with right hands again.