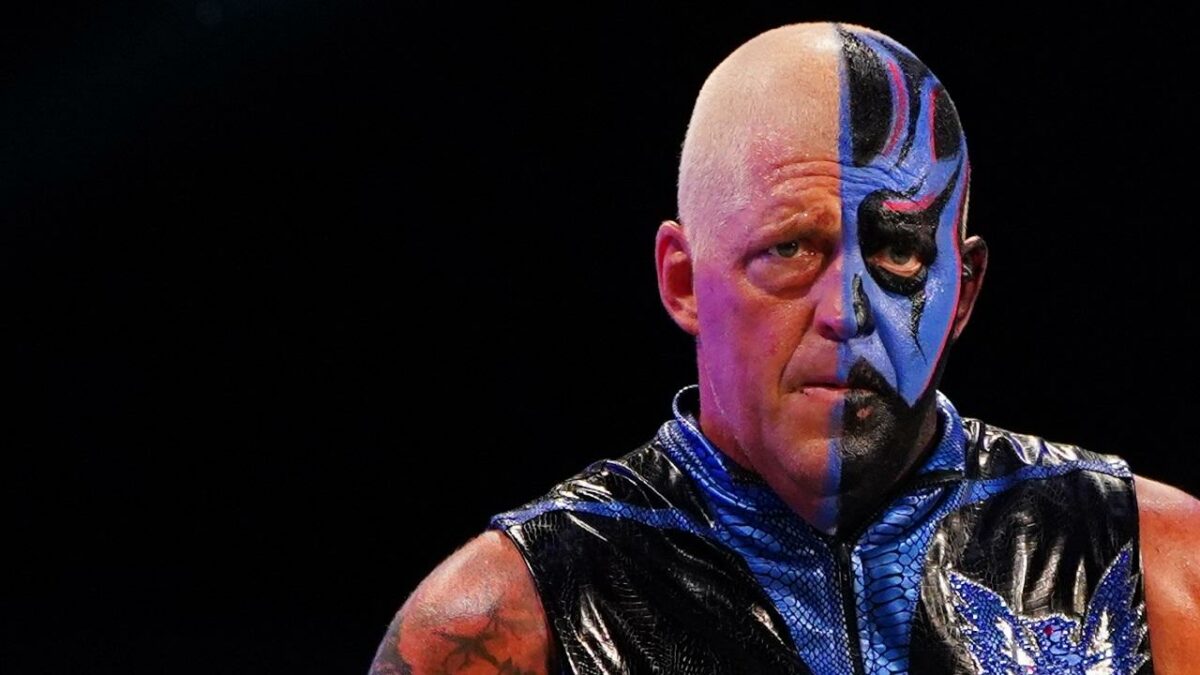 Vickie Guerrero and Brad Maddox are in the ring. They talk about how they are banding together to prevent Big Show from ruining the show. Daniel Bryan comes out and taunts them. He says that Big Show will be there later in the evening. He calls out Cody Rhodes and Goldust, and Vickie sets the main event to be Cody Rhodes, Goldust and Daniel Bryan vs. The Shield.

Erick Rowan and Luke Harper (with Bray Wyatt) vs. The Miz and Kofi Kingston

He locks in Kingston’s head. Kingston gets to his feet, but Harper shuts him down. He whips Kingston into the corner and charges, but Kingston kicks Harper. Rowan tries to take Kingston out, but Kingston sends him outside. Kingston tries to tag Miz in, but Rowan pulls him off the apron. Back in the ring, Harper hits the discus clothesline for the win.

After the match, Wyatt takes up the mic and tells Miz it’s okay to be afraid. He tells Miz to enjoy his world as long as he can because he is going to take it all away.

AJ bails out of the ring. She gets back in and runs out the other side. Brie tries to run after, but Snuka steps in between them. Brie is able to land an elbow and send AJ back in the ring. AJ snaps Brie’s arm across the center rope. AJ drops an elbow on her arm and then goes to work on it. Brie gets to her feet, but AJ hits a kick to the midsection. She goes back to attacking Brie’s arm. AJ slams Brie’s head to the mat for a two count. She then wraps Brie’s arm around the center rope and pulls it.

She wrenches Brie’s arm behind her. Brie gets out and hits a pair of clotheslines. Brie lands a back elbow and then a missile dropkick for a two count. Brie knees AJ in the head, against the ropes, twice. Tamina charges Nikki on the outside. Nikki sidesteps and Tamina collides with the steps. Brie hits the sitout facebuster off the distraction for the win.

Back from commercial and Lillian Garcia starts announcing for a match. Big Show walks in through the crowd and gets into the ring.

He says that Bryan gave him an autographed ticket. Show says that he wants to thank the fans for all the support they have shown him and his family through these hard times. He says that the WWE Universe wants his job back and the authority is starting to see that.

Brad Maddox comes out angrily to the ring with Vickie. He questions Show on what he is doing and tells him to get out. Vickie says Show is going to stay fired. Maddox tells him to get out again. Show says he has nothing to lose and hits Maddox with a knockout punch.

Punk locks in Langston’s waist, but Langston breaks the hold. Punk locks in a side headlock. Langston gets out and hits a shoulder knockdown. Punk hits a kick to the head and then goes to work on Langston’s arm. Langston hits a body avalanche in the corner. He strikes Punk. Punk fights back with elbows to the head. Langston charges Punk against the ropes. Punk pulls the ropes down and Langston crashes outside. Punk leaps out at him, but Langston catches him and slams him into the apron.

Back from commercial and Langston has a single leg Boston crab in. Punk gets to the ropes. Langston drops Punk’s gut across his knee and then pulls his head/neck back. Langston goes for a running splash, but Punk puts his knees up. Punk hits elbows and kicks. He whips Langston and hits a heel kick. He goes for a swinging neckbreaker, but Langston shoves him away. Punk tosses Langston outside and hits him with a dive through the ropes. He tosses Langston back inside and hits a cross body from up top for a near pin fall.

Paul Heyman, Ryback and Curtis Axel come out and Heyman congratulates Punk for his win over a mediocre rookie barely out of NXT. He says at Hell in a Cell Punk will be facing a pro, a caged animal. He says Punk wants no part of Ryback or himself. He says that he is the best in the world.

Punk takes up a mic and says he’s not best in the world, he’s an idiot. Punk says they will be locked in a cell, so Heyman won’t be able to run away. He says like an animal, he is going to put Ryback to sleep. Punk says he is going to put both of them through hell. Paul says hell ain’t no bad place to be and they all walk down to the ring. Punk meets them and they start fighting. The numbers game gets the better of Punk. Things head into the ring and Langston gets up and helps Punk. Langston destroys Axel and stares at Heyman.

Back from commercial and Del Rio is waving a Mexican flag in the ring. Josh Mathews is there as well for an interview. Mathews says that at Hell in a Cell, Del Rio will be facing Cena and then the Cena hype video from RAW where Cena talks about how the WWE was always his dream is shown.

Mathews asks Del Rio for his thoughts on the video. Del Rio says he’s Mexico’s greatest import and champion. He says that the crowd is a bunch of gringos and lack Mexican passion. He says John Cena is a gringo. He asks whom Cena thinks he is. He says Cena shouldn’t come back from surgery and go straight to a fight with the champion. He questions Cena’s sanity for coming back so quickly and says he is growing soft. He says Cena’s ego grows by the day, but after he loses at Hell in a Cell, he’ll be like all the gringos in the crowd: nobody.

Del Rio asks if Cena wants to know what will happen to his arm at Hell in a Cell. He then attacks Josh Mathews and locks him in the cross arm breaker.

The Real Americans vs. The Usos

The Real Americans take control early. A lot of attention is paid to Zeb Colter on commentary, talking about Los Matadores. Cesaro eventually hits the Cesaro Swing on one of the Usos. Swagger gets tagged in and stomps the Uso on the mat. Swagger slams the Uso to the mat and then locks in his arms behind him. The Uso gets to his feet. He tries to tag in the other Uso, but Swagger drives his shoulder into his gut in the corner. Cesaro gets tagged in as Swagger hits the Swagger Bomb.

Cesaro hits a double boot stomp and goes for a cover, but the Uso puts his foot on the rope. Swagger comes back in. He locks in an inverted keylock on the Uso. Swagger knocks the Uso off the apron, and then slams the other Uso to the mat as the Los Matadores music hits and they come out. Colter gets off commentary and starts walking up the ramp towards them. El Torito gores Colter in the stomach. Colter doubles in pain and El Torito gores him in the butt. Back in the ring and one of the Usos Superkicks Swagger. The other Uso hits a splash from up top for the win.

El Torito hits his springboard senton on Swagger after the match.

Daniel Bryan comes out for his match. Randy Orton comes out. He talks some trash and then says he guarantees he will become champion and become the face of the WWE once more.

Daniel Bryan, Cody Rhodes and Goldust vs. The Shield

Goldust and Reigns start off. Reigns hits multiple headbutts. Ambrose comes in. He kicks Goldust in the gut and hits head strikes. Rollins comes in with multiple head strikes. Reigns comes back in and whips Goldust into the corner. Goldust comes back with a back elbow. Goldust hits an atomic drop. Cody gets tagged in. He hits Reigns with a missile dropkick. Cody hits Ambrose and Rollins off the apron. Reigns tosses Cody into the turnbuckle.

Cody gets out. Reigns charges him. Cody side steps and Reigns crashes to the outside. Reigns comes back in and Cody hits a dropkick. Rollins comes in and dropkicks Goldust off the apron. Bryan and Ambrose get tagged in. Bryan hits his usual pumped up moves. He hits Ambrose with a corner dropkick and sets him up top. He head scissors Ambrose off the top and Reigns breaks up the pin. Goldust sends Reigns from the ring. Rollins sends Goldust from the ring. Cody takes out Rollins and Ambrose sends him from the ring.

Ambrose and Bryan both go for a crossbody at the same time and collide. Reigns goes to spear Goldust on the outside. Goldust moves and Reigns hits the steel steps. Back in the ring, Bryan kicks Ambrose repeatedly and hits a vertical Suplex. Bryan goes up top. Ambrose follows and superplexes him off. Cody breaks up the pin attempt. Rollins attacks Cody and tries to powerbomb him from the apron to the outside. Cody hangs onto the ropes. Ambrose punches from the ring Cody, and Rollins powerbombs Cody into Goldust. Cody and Goldust go flying over the announce table.

Bryan locks Ambrose in the Yes lock. Reigns tries to get involved. He clotheslines Reigns out of the ring, sends Ambrose out and nails both of them with a dive. He sends Ambrose back inside and hits him with the flying knee to the face for the win.