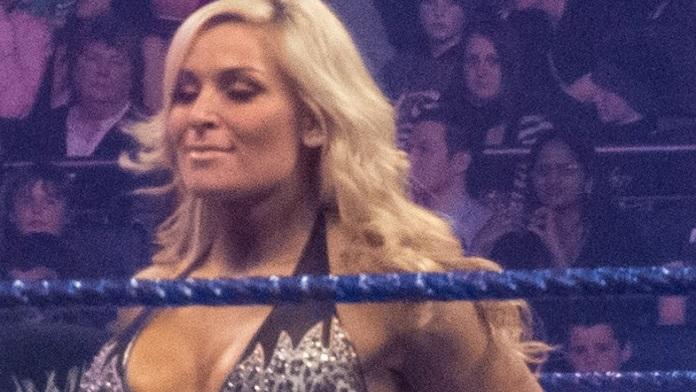 AJ Lee and Tamina Snuka come out to the ring.

They chain wrestle briefly. Natalya gets a quick cover attempt. AJ locks in a side headlock. She takes Natalya to the mat with her head still locked in. Natalya reverses out and locks in AJ’s arm. AJ reverses and locks in Natalya’s arm. Natalya gets out and suplexes AJ. AJ tries to mount some offense and get a pin, but Natalya pulls her up off the mat. AJ kicks Natalya in the back. She charges Natalya in the corner. Natalya moves and hits AJ with a body slam. She rams AJ into the corner.

Natalya goes for the Sharpshooter. AJ gets out and heads to the outside to regroup. Natalya chases her around the ring and Tamina steps in her way. AJ tries to ambush her from behind, but Natalya sends her into the barrier. She sends AJ back into the ring and whips her into the corner. Natalya goes up top and AJ pulls her off. Natalya rolls outside as things go to commercial.

Back from commercial and AJ gets a spinning heel kick. She chokes Natalya on the center rope and attacks her in the corner. AJ tosses Natalya out of the ring and Tamina attacks her. AJ exits and slams Natalya’s head into the apron. She tosses Natalya back inside and locks in her head from behind with a body scissors on the mat. Natalya gets to her feet, but AJ tosses her to the mat. AJ skips around and Natalya rolls her up. She tries to keep the attack up, but AJ counters into a DDT.

AJ goes for the Black Widow, but Natalya slings her off. She hits AJ with a clothesline and a vertical Suplex. She dropkicks AJ in the back and hits a spinning strike. Natalya tries to lock in the Sharpshooter again, but AJ counters into a pair of pin attempts. Natalya locks in the Sharpshooter finally. AJ tries to get to the ropes. Natalya pulls her back to the center of the ring. Tamina gets into the ring and Superkicks Natalya in the side of the head.

After the match, AJ locks in Black Widow on Natalya.

The RAW Recap is then shown, and it focuses on the things that went down between Randy Orton and Big Show.

Then, Natalya is crying backstage and Tyson Kidd is trying to calm her down, saying that she was cheated. Natalya keeps repeating that it was her last chance.

Next, a WWE.com exclusive interview is shown between Michael Cole and Kane where Kane talks about how his monster is still on the inside and that he accepts the beast. He says it is only one part of his personality and not the only tool at his disposal. When the time is right, the monster will be utilized. Kane is evolving.

He sends Kidd back in the ring and goes up top. Gabriel hits a crossbody and then locks in Kidd’s head. Gabriel lands an elbow to the back of the head. Kidd comes back with several kicks. He tries to suplex Gabriel. Gabriel flips out and tosses Kidd behind him. He kicks Kidd several times. Kidd goes to the corner. Gabriel charges. Kidd moves and Gabriel jumps up top. Kidd jumps up top as well and slams him back first to the mat.

Kidd lands a couple kicks. Gabriel comes back and goes up top for the 450. Kidd stops him. He goes up top and attempts to hurricanrana him off, but Gabriel counters into a roll up for the win.

Next, the tail end of John Cena vs. The Real Americans from RAW, followed by Alberto Del Rio’s ambush on Cena and Big E. Langston’s save is shown.

Young and McIntyre start off. McIntyre hits a big shoulder knockdown. McIntyre lands a dropkick. He strikes Young. Young comes back by tossing McIntyre behind him. Titus comes in and tosses Young into McIntyre’s stomach. Titus hits a body slam. McIntyre battles back with clubbing blows to the back. Titus hits a shoulder knockdown. He sets McIntyre up on the turnbuckle and hits him in the mid section. Young comes back in and keeps the attack up. Slater tags in and sidesteps a charging Young, sending him into the corner and outside.

Slater slams Young’s arm into the steel steps and tosses him back inside. He locks in Young’s arm on the mat. Young gets to his feet, but Slater hits a neckbreaker. McIntyre tags in and hits a big chop in the corner. McIntyre lands a vertical Suplex. Young fights back with head strikes. He leaps at Titus to tag in, but McIntyre catches him. McIntyre hits a dropkick. Slater tags in and the Jacks double Suplex Young.

Slater stomps Young’s head. He hits headshots to Young in the corner. Young battles back with punches of his own. He leaps at Titus again. Slater stops him and clubs him in the back. Young tosses Slater behind him and tags in Titus as Slater tags in McIntyre. Titus lands shoulder tackles and boots. Slater tries to get involved, but Young takes him out of the ring. Mahal gets up on the ring apron, but R Truth pulls him off. McIntyre hits the Future Shock. He tags in Slater. Slater hits a springboard corkscrew splash thing for the win.