John Cena Is A House Show Draw, But Does A Lighter Schedule For Him Badly Hurt WWE?

John Cena is a bona fide house show draw. In an era where it's often said "the brand is the draw" for WWE, Cena is an exception. Still, even a theoretical complete absence of Cena from house shows going forward, I estimate would cost WWE $4.2 million annually, which is only 0.6 percent of the total revenue the company reported in 2015.

Cena's appearances meant an average of a 27 percent positive difference in attendance to house shows in the United States and Canada, from 2011 through June 2016. Should Cena stop appearing on house shows, attendance for those non-televised events would likely suffer, but overall attendance, live event revenue and revenue from merchandise sold at events, would probably not be hurt badly. This is according to a study I did originally for an article on Seeking Alpha.

As Cena's mainstream media appearances seem to be ramping up, his house show schedule seems to be winding down. He worked house shows in New York City and Glen Falls, New York, this past weekend. Those were the first non-televised events in the U.S. or Canada he appeared on since returning from his shoulder injury that kept him out of action from the beginning of January to May 30 (barring an unadvertised appearance at WrestleMania). Cena also appeared at two house shows in Tokyo, Japan, earlier this month; is scheduled for a four-show tour of New Zealand and Australia in August; and for one show in Shanghai, China, on September 10. Those are the only house shows he's advertised for currently. He's still advertised to appear on television tapings and pay-per-view events. He's even not currently advertised for the entire European tour in November, nor is he advertised for either the RAW or SmackDown tapings in Glasgow, Scotland, that are a part of that tour.

Based on the market-to-market analysis in the aforementioned article, Cena does not make a difference to international house shows like he does for those in the U.S. and Canada. The spreadsheet for said analysis is here. Chris Harrington originally compiled much of the attendance data from the Wrestling Observer Newsletter. Some data is also sourced from Cagematch.net.

If Cena stopped working house shows completely, it would likely cause a three-percent loss in attendance. That's a difference that would still allow WWE to report a rounded average attendance per event for shows in North America of 6,000: the same annual average they've reported four of the last five years, and each of the last three. This means there wouldn't be any difference in the Key Performance Indicators page on attendance that WWE updates quarterly. 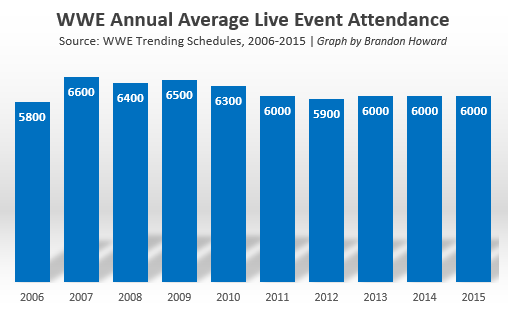 More importantly, the maximum gross revenue cost of Cena no longer working any house shows (my guess is he will still work a few here and there) would be about $3.5 million annually, just 0.5 percent of the $658.8 million in overall revenue WWE reported for 2015. This doesn't take into account that house show ticket prices are lower than prices for television tapings and pay-per-views, so the amount of lost revenue could be even smaller.

The Venue Merchandise segment of WWE's business, a $22.4 revenue stream in 2015, would also likely be affected if fewer attendees went to WWE events. If Venue Merchandise revenue falls by three percent like Live Event attendance and revenue theoretically would, then an additional $658,300 could be lost annually, bringing the total cost of Cena being off house shows to $4.2 million, or 0.6 percent of WWE's revenue in 2015; still a relatively small amount of money to the company's overall business.

Of course, Live Events and Venue Merchandise, not to mention other business segments, could suffer more if Cena's star power is diminished for whatever reason.

On July 9, Cena posted the following to Twitter. He seemed to acknowledge a change to his schedule, but affirmed his commitment to WWE:

I have not "earned" a slower schedule, I have "earned" an opportunity to challenge the limits of work capacity. #NeverGiveUp #HUSTLE