Five things about this lawsuit over royalties:

1. This is very similar to a lawsuit filed by another wrestler in April 2016.

On April 6, 2016, Rene Goguen (better known as La Resistance's Rene Dupree) filed a similar suit in Connecticut United States District Court alleging that he had "not received contractually owed royalty payments from World Wrestling Entertainment (WWE) for certain content that has been sold or licensed by the WWE on the World Wrestling Entertainment Network (WWE Network) and on Netflix." Goguen suit was also a Class Action Complaint and was filed by Brendon P. Leydon of Stamford, CT and Clinton A. Krislov & Matthew T. Peterson of Chicago, IL. These are the same attorneys who filed Bagwell's lawsuit.

The suit didn't last long at all.

Less than a week after the initial complaint, a notice of voluntary dismissal was filed on April 11, 2016 by Goguen's lawyers. What happened? Lead attorney Jerry S. McDevitt told TheWrap, that Goguen had "signed a buyout agreement in 2011" which "waived any claim for future royalties for any kind for any reason". It seems that Goguen was not going to be a good lead plaintiff for this class action.

Modern WWE booking agreements, such as the one signed by Stephanie McMahon-Levesque in October 2013, have clear language that WWE is not paying royalties related to the WWE Network.

7.5 No Royalties Paid to WRESTLER. Except as specifically set forth in Section 7.1 through 7.3 above, WRESTLER shall not be eligible for any payment or royalties with respect to any other goods, services or otherwise including without limitation to the following: television license fees; television subscription fees; internet subscription fees; subscription video on demand fees; magazine subscription fees and/or advertising; and/or distribution fees of any kind paid to PROMOTER by any entity in connection with the exploitation of the Intellectual Property.

This sort of language began appearing in booking contracts around 2004 when the WWE launched the "WWE 24/7" service (later rechristened "WWE Classics on Demand"). Prior to that, such as in Brock Lesnar's 2003 contract, there was a much broader definition:

7.5 (a) (i) Royalties/Pay-Per-View Videos Sold By Licensees: PROMOTER shall allocate twenty-five percent (25%) of the Net Receipts paid to PROMOTER by Licensees authorized to reproduce and sell video cassettes, videodisc, CD ROM, or other technology, including technology not yet created (hereinafter referred to as "WWE Video Products"), of WWE pay-per-views in their entirety ("WWE Pay-Per-Views") to a talent royalty pool

Indeed, it was this language from Goguen's 2003 contract which the April lawsuit cited. These changes in booking contract language are likely to limit the scope of which performers would be eligible to join any class action suit over WWE Network royalties. That is why on the second try, they found another lead plaintiff (Bagwell) who only worked for WWE prior to 2004.

Specifically, the Bagwell class action suit seeks to cover "WWE Controlled Performers" whose 1992-1998 contract covered WWE Video Products as "video programs" or 1999-2004 contract includes the "technology not created" language. However, people who have signed a "Nostalgia" or "Legends" contract or a booking contract with WWE after January 1, 2004 are excluded.

3. One of these lawyers is also involved with another lawsuit against WWE.

Brendon P. Leydon is also one of the lead attorneys on Racketeering (RICO) Act suit that was filed on July 18, 2016 with 55 plaintiffs (Laurinaitis et al v. World Wrestling Entertainment, Inc et al). That suit has 16 counts covering everything from independent contractor misclassification, wrongful death, unconscionable contracts and fraud. This is one of the two so-called CTE (Chronic Traumatic Encephalopathy) suits which WWE is currently battling in Connecticut courts. The other case is the consolidated "Russ McCullough et al v. World Wrestling Entertainment Inc".

4. Buff Bagwell's tenure with WWE only lasted about nine weeks

World Wrestling Federation Entertainment, Inc. announced the purchase of World Championship Wrestling (WCW) on March 23, 2001. WWFE had purchased the "global rights to the WCW brand, tape library, and other intellectual property rights." The 2001 Annual report notes that WWFE spent about $2.5 million to acquire the rights and another $1.8 million for "certain related costs". As part of the transaction, WWFE created a wholly owned subsidiary called "WCW, Inc."

When WCW folded, WWE did not immediately pick up all of the existing talent contracts. Many of the wrestlers had signed deals which included guaranteed money. In order to hire the talent, WWE would need to negotiate a "contract buyout". As a result of a separate racial discrimination lawsuit (Onoo v . World Championship Wrestling, Inc ., Turner Sports.,) against World Championship Wrestling, we have an idea of some of the big-money deals that had been signed:

According to an internal WCW talent contract database as of May 2000, Buff Bagwell's three-year contract was listed as ending in March 25, 2001 with an annual salary of $400,000. The timing is congruent with the copy of Bagwell's 1998 contract with World Championship Wrestling that was included in his lawsuit, though his compensation amounts were blacked out. 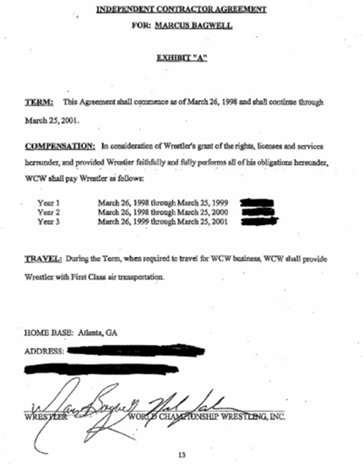 Bagwell signed a contract with the WWE-owned subsidiary WCW, Inc. on May 18, 2001. His WWE career did not last long. He only performed twice for WWE  once at a house show on July 1, 2001 and once on July 2, 2001 on Raw is War. On August 7, 2001, World Wrestling Federation Entertainment, Inc. sent Bagwell a letter regarding a "early contract release" which did specify that Bagwell would still continue to receive "royalties due him pursuant to, and as determined by, the Contract."

Bagwell's 2001 contract with WCW did include the "other technology, including technology not yet created" language. In addition, Bagwell's lawyers contend that the 2001 booking agreement with WCW, Inc. would merge "all prior understandings, negotiations, and agreements" and thus would cover the royalty obligations from Bagwell's time from 1991 to 2001 in World Championship Wrestling.

On June 23, 2016, Bagwell's legal team engaged a certified public accountant to examine WCW's books concerning the lack of WWE Network payments to Mr. Bagwell. Bagwell's 2001 contract specifically allowed for this sort of audit (at the wrestler's expense). However, WWE's reply (through McDevitt's law office K&L Gates) on August 5, 2016 was that this was a "pretextual and invalid audit request" because "there is nothing to audit" regarding WWE Network royalties.

Bagwell has been receiving royalties from WWE for certain licensing (such as NWO Back in Black DVD and being in the "WWE: The Attitude Era" book). However, his Q1 2016 quarterly statement amounted to a paltry $64.40. 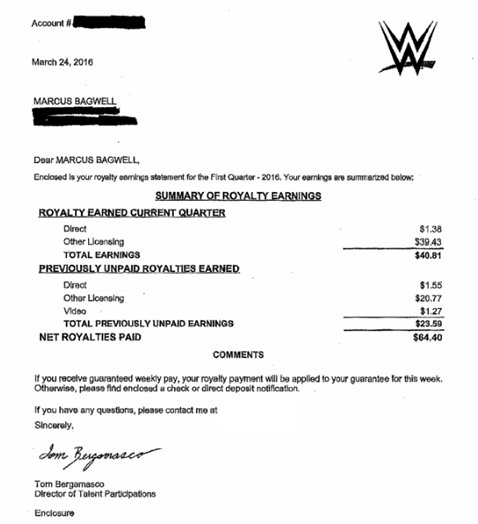