- The finals of The Mae Young Classic are now confirmed as the first 8 episodes of the 32-competitor tournament are available for viewing on the WWE Network. The September 12th live finals from Las Vegas will feature Kairi Sane vs. Shayna Baszler for the MYC trophy. The finals will air at 10pm EST on the WWE Network after SmackDown goes off the air that night. The semi-finals saw Shayna defeat Mercedes Martinez and Sane defeat Toni Storm to advance.

- WWE posted this video of MMA Horsewomen Marina Shafir, Jessamyn Duke and Ronda Rousey facing off with WWE Horsewomen Charlotte Flair, Bayley and Becky Lynch. Rousey asked the WWE stars to name the time and the place, but they smiled it off and walked away.

Rousey & Co. were ringside to support Baszler through the tournament and they are expected to be at the live finals in Vegas. Sasha Banks will likely be there as well as she missed the tournament tapings due to an overseas promotional tour.

- Below are the brackets for the tournament going into the finals: 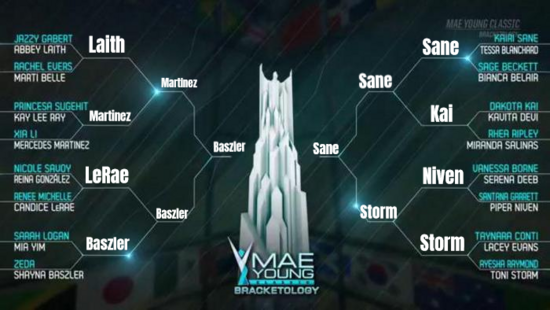