As noted, Friday's matches at Download saw Webster defeat James Drake, Ashton Smith defeat Joseph Conners, Zack Gibson defeat Amir Jordan and Travis Banks defeat Ligero. Smith is set to face Banks in the next round while Webster faces Devlin and Gibson faces the winner of Drew Gulak vs. Jack Gallagher, which should air on an upcoming WWE NXT episode.

Below is a look at the updated bracket: 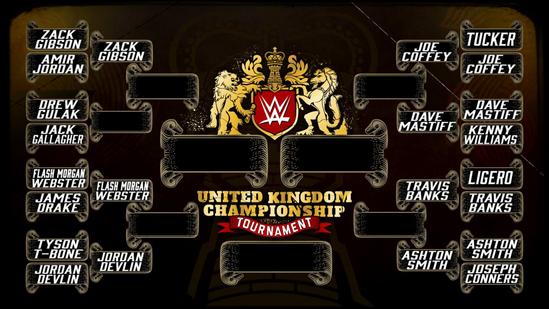 - Roman Reigns vs. Jinder Mahal is now official for Monday's RAW, which takes place just days before their scheduled match at the WWE Money In the Bank pay-per-view. Below is Reigns' response to Jinder's Twitter challenge and WWE's announcement confirming the match:

Jinder Mahal & Elias stole a tag team win from Roman Reigns & Seth Rollins last Monday on Raw. Later in the night, The Big Dog got a piece of The Modern Day Maharaja in a backstage encounter, and now it appears the WWE Universe won't have to wait until WWE Money in the Bank to see the archrivals square off.

Friday on a WWE.com Exclusive, Mahal challenged Reigns to a match for Monday Night Raw, and the former WWE Champion accepted one day later. With animosity between the two Superstars at an all-time high, will there will be anything left of either competitor by the June 17 pay-per-view?

Big words from a scared man. You want to make a challenge? Get ready for the biggest fight of your career. Just another Monday for me. #Raw #MyYard #B2R https://t.co/eefwkUXvCd