– Big Show was backstage for last night’s WWE RAW in Miami as he lives in the area. Above is backstage video of Show talking to Mike Rome about the SummerSlam match between Roman Reigns and WWE Universal Champion Brock Lesnar.

“I think after everything that’s happened, you got to give the devil its due, you gotta give Roman the opportunity,” Show said when asked to pick a winner. “He’s never quit, he’s got so much fight. I’ve seen Roman take beatdowns that would make most people quit the business. He’s got heart, he’s got guts and he knows what it’s like to be a locker room leader now. I think whatever happens at SummerSlam, if Roman Reigns doesn’t come home with the championship then that’s it for Roman Reigns. I don’t think by any means that boy has quit in him, so I’m saying it’s not it for Roman Reigns, and I’m gonna say Roman Reigns is going to take it to Brock like never before.”

See Also:
Nia Jax On Talking With Vince McMahon About Announcing Her Weight, Ronda Rousey, Is She’s A Heel

– We noted before how Nia Jax tweeted GIF reactions during last night’s RAW episode, possible reactions to being off TV for three straight weeks following her loss to RAW Women’s Champion Alexa Bliss at WWE Extreme Rules, which was the last match she wrestled. It looks like Jax may be injured as she revealed on her Instagram Story that she is “rehabbing” while at home. She also tagged NormaTec Recovery in the post. You can see a screenshot from today’s Story below: 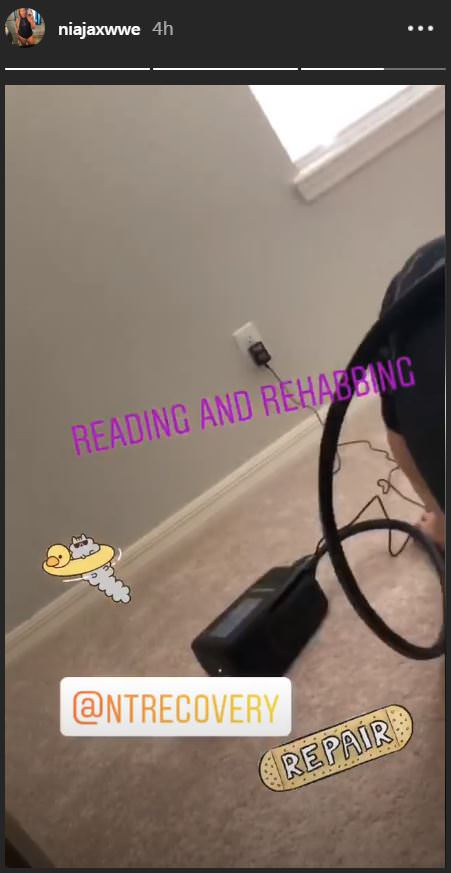