– WWE issued the following on the latest update to the WWE SuperCard mobile game:

WWE SuperCard is getting a big boost from new Goliath Tier cards that are available now and in the weeks to come.

Those attempting to conquer WWE SuperCard are about to get a Goliath-sized boost.

A new update to the popular WWE mobile game for iOS and Android will deliver several new Goliath Tier cards for in-game use starting today. 2K announced the recently released tier will include new Throwback and Fusion cards as of today, and will gain additional WWE Hall of Fame cards at a later date.

Enthusiasts who play WWE SuperCard starting today will also receive free card packs that include a Throwback card up through the WrestleMania 34 tier. Players can gain another special pack every four hours at no additional cost until the promotional period ends on July 31.

WWE SuperCard, which is developed by Cat Daddy Games in conjunction with Visual Concepts, is available now to download free of charge on the App Store for iOS devices, as well as the Google Play Store and Amazon Appstore for Android devices.

– As noted, SmackDown Women’s Champion Carmella suffered a busted lip during her non-title loss to Becky Lynch on this week’s SmackDown. She tweeted the following in response to a fan asking about her status for weekend WWE live events. It’s possible she’s just trolling fans as she has been commenting on how brave she is, playing up the seriousness of the very minor injury.

I’m not sure if I will be medically cleared to compete. Hopefully my lip will be healed by then. Crossing my fingers. ???? https://t.co/CQq4f1OMiZ

For those who missed it, you can see Carmella’s busted lip in the photo below: 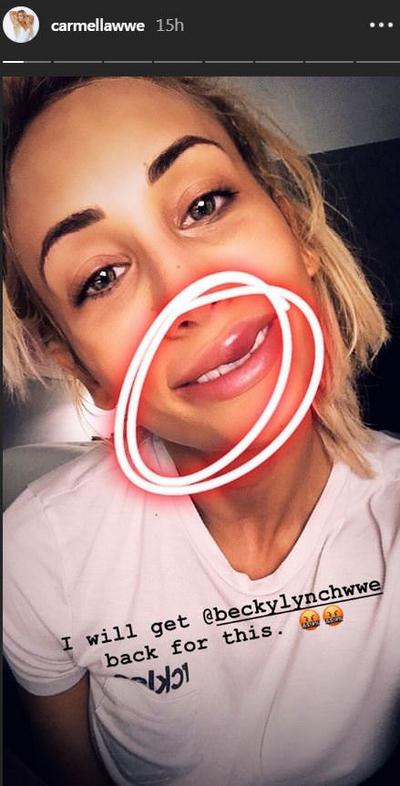