First-Hand WrestleCade Report, How The Event Helped Paved The Path To Success For ALL IN

Wrestlecade isn't new. It's not even new to me.

Winston-Salem has hosted the wrestling convention/supercard since 2012. I've been here a few times myself over the years, even covering the event once before.

But as I walk up to the convention center on that particular kind of drizzly, wistless Fall-ish/Winter-ish weekend your favorite 80s movie once promised and as I chat it up with larger-than-life legends and rookies alike... and as I feel the buzz of thousands of wrestling fans under one roof... I can't help but note:

This all *feels* new.

Once upon a time, WrestleCade mastermind Tracy Myers about packed up the whole shebang.

Conflicts with the city about increased costs at "The Benton" convention center made the event mostly inaccessible from a promoter's standpoint. To hear Myers, the effervescent salesman, discuss what happened at the end of 2016 is both both hilarious and alarming: funny because there's always a hype-man somewhere backing up Tracy's story (one wrestler later remarked, "yeah, and we'd do more here [in reference to The Benton] if they'd play ball!"), and disconcerting knowing that the fate of this indie mecca was once held up in a giant game of political chicken.

Some handshaking and deal maneuvering allowed the event to come back in 2017. Admittedly, I skipped last year's event (appropriately dubbed "The New Beginning") because the allure of WWE's shiny mistress - a resurrected Starrcade event just a short drive down Interstate 40 at historic Greensboro Coliseum - was too much to resist. She promised me steel cage championship matches, retro graphics, and a lineage that harkens all the way back to Ric Flair and Harley Race battling in a 1983 passing-of-the-torch classic.

And for what it's worth, that event was great. Retro graphics, nostalgic video packages, and a solid card made it the most complete WWE house show I've ever attended. I even saw an Arn Anderson spinebuster - live! 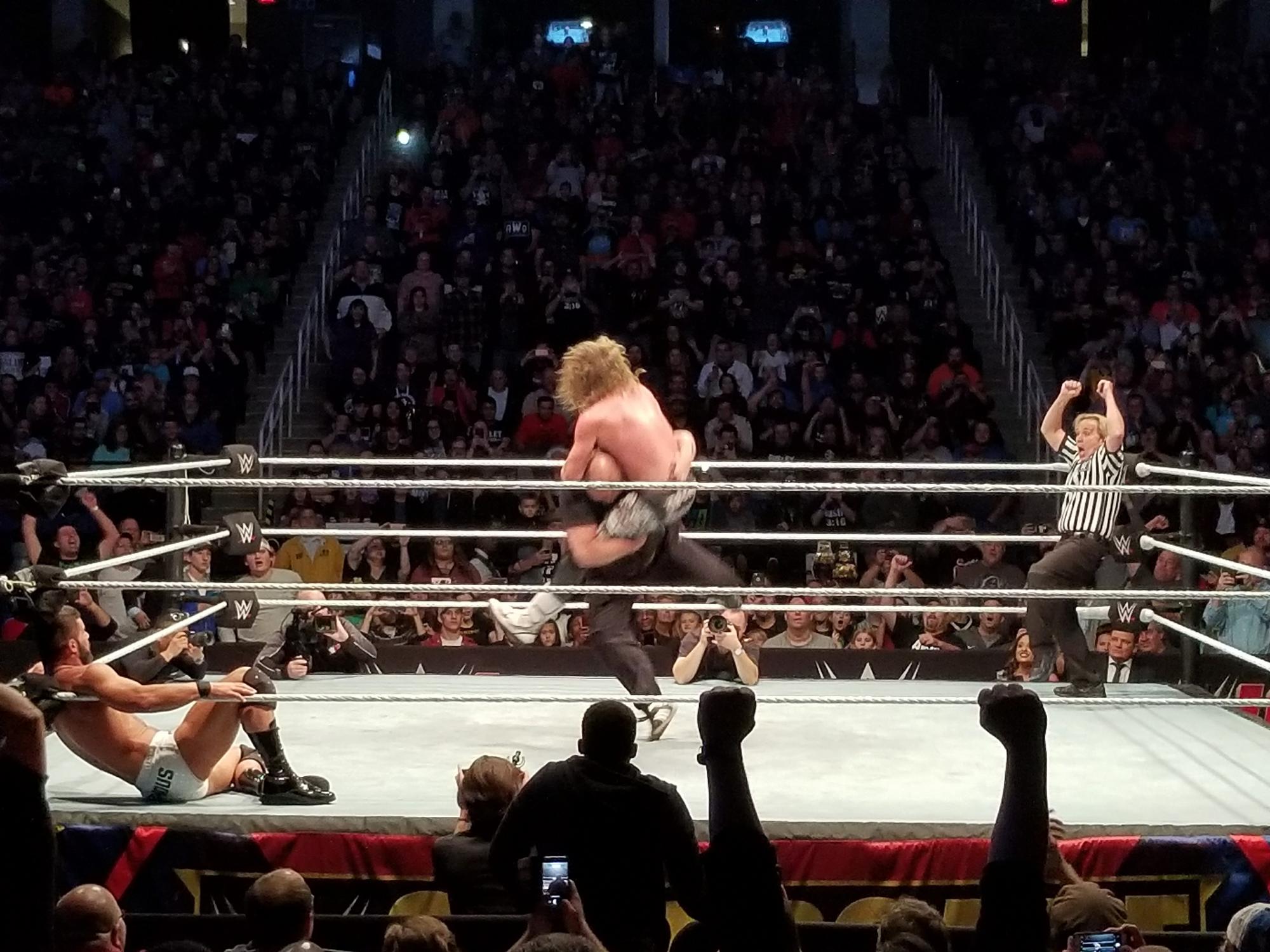 There was inevitable blowback from WrestleCade diehards who sensed WWE was trying to demolish what Myers & co had built. At first the outcry was deafening - why couldn't the big E just pick a different night? They took the counter-programming as an affront. But then, once tempers cooled, fans realized it was actually recognition from the biggest professional wrestling company in the world that WrestleCade had become something special.

Even WWE could no longer ignore this little can-do convention in Winston-Salem, North Carolina.

A year later sees the wrestling landscape entirely transformed. WWE Starrcade 2018 has both moved to Cincinnati Ohio (what?) and found a broadcast slot on the WWE Network (duh!), but airing 24 hours AFTER the event happens live (wait, double-what?). New Japan Pro Wrestling is winding down on it's most-successful year in America yet. The 70-year-old National Wrestling Alliance finds itself revitalized under a new owner, former Smashing Pumpkins frontman Billy Corgan, and a new champion, Nick Aldis, who embodies the zippy old-meets-new mindset a historic company like NWA must embrace. Ring of Honor is doing whatever it is Ring of Honor does these days (dubbed the "Sinclair Status-Quo Syndrome") and Impact Wrestling still searches for a more permanent TV broadcast partner

Still, the American independent scene is thriving more than ever - and that's thanks in large part to the unmitigated success of the Cody Rhodes/Young Bucks produced "All In" pay-per-view event.

Thank you. Thank you so much. So proud. I hope you enjoyed the show. #ALLIN

What Cody Rhodes and the Young Bucks accomplished on September 1st, 2018 was incredible. They sold over 11,000 seats - the first independent event (read: not WWE or WCW) since 1993 to accomplish that feat. They hosted a thriving podcast fan convention. They booked multiple big names from major promotions to compete against one another, and inked deals for championships to be on the line. Legends showed up, as did indie darlings and ex-WWE stars. Even a non-wrestler had one of the most entertaining matches of the night.

And a little over two months later, as I'm standing in line for my 3-Day WrestleCade "Championship Pass" wristband, the lightbulb goes off:

If selling 11,000 tickets to an indie show in Chicago, Illinois - one of the hottest wrestling cities in the world- after months of promoting with two of the biggest feds in the business (ROH and NJPW) is impressive, what does it mean when an independent show sells almost 6,500 tickets to an event in Winston-Salem, NC just days after the second-biggest holiday of the year?

It means All In simply followed the playbook WrestleCade wrote almost six years prior.

There are are guys with groupies, of course - Hall and Nash draw a crowd wherever they go, RVD has a steady flow of loyal 4:20'ers, and Knox County, Tennessee mayor Glenn Jacobs is in full Kane regalia while posing for pictures all afternoon. But in efforts to get words with recent Survivor castaway Johnny Impact, ECW original Jerry Lynn, and 2x World Champion Jack Hager/Swagger, I'm unrestrained. 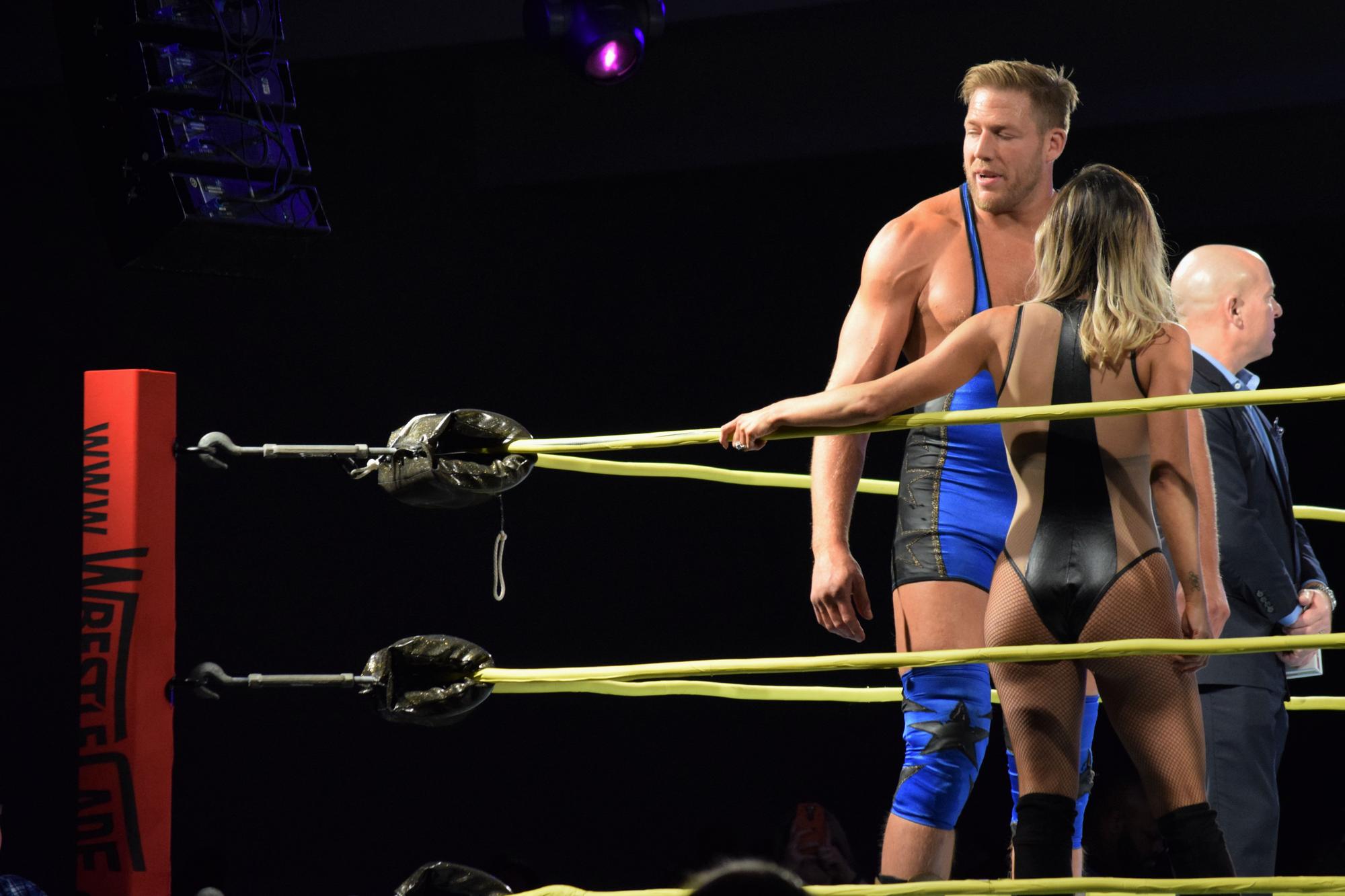 Also unrestrained are my interviewees. The words come easy for guys like Glacier, who are excited to find their career renaissance later in the game thanks to a savvy word-of-mouth and a positive attitude. Ex-WWE stars like Marc Mero and Fred Rosser (fka Darren Young) just want to share positive messages about life both in and out of the ring. Indie darlings John Skyler, fresh off his PWF championship victory the night before, and Brash, reigning AML Prestige champion, both talk about what's kept them going in the business and what they hope to accomplish yet.

I don't even bother to try and grab a word with Scott Hall (a mistake I've made once before). But I do spend time with the Blue Meanie, who is as authentic and excited on the exhibit floor as he ever was on-screen. It's great! It's energizing, and feel-good, and anything you could ever want as a pro wrestling journalist OR fan.

My buddy and I break for beers and lunch, and ACC football. And this is when I realize how awesome Pro Wrestling fandom is: as we debate current pushes and future stars, the guy sitting next to us at the bar strikes up a simple conversation.

"You guys here for WrestleCade?"
"Hell yeah we are."

Then, the real question:
"Who do you think is the best wrestler right now?"

It's the kind of moment that makes events like this so special. Bonding with fellow fans, chatting with absolute authority about our opinions as though somebody, anybody, might hear us and put our booking decisions to work.

We hang with this dude the rest of the night. He even buys me a Bud Light. 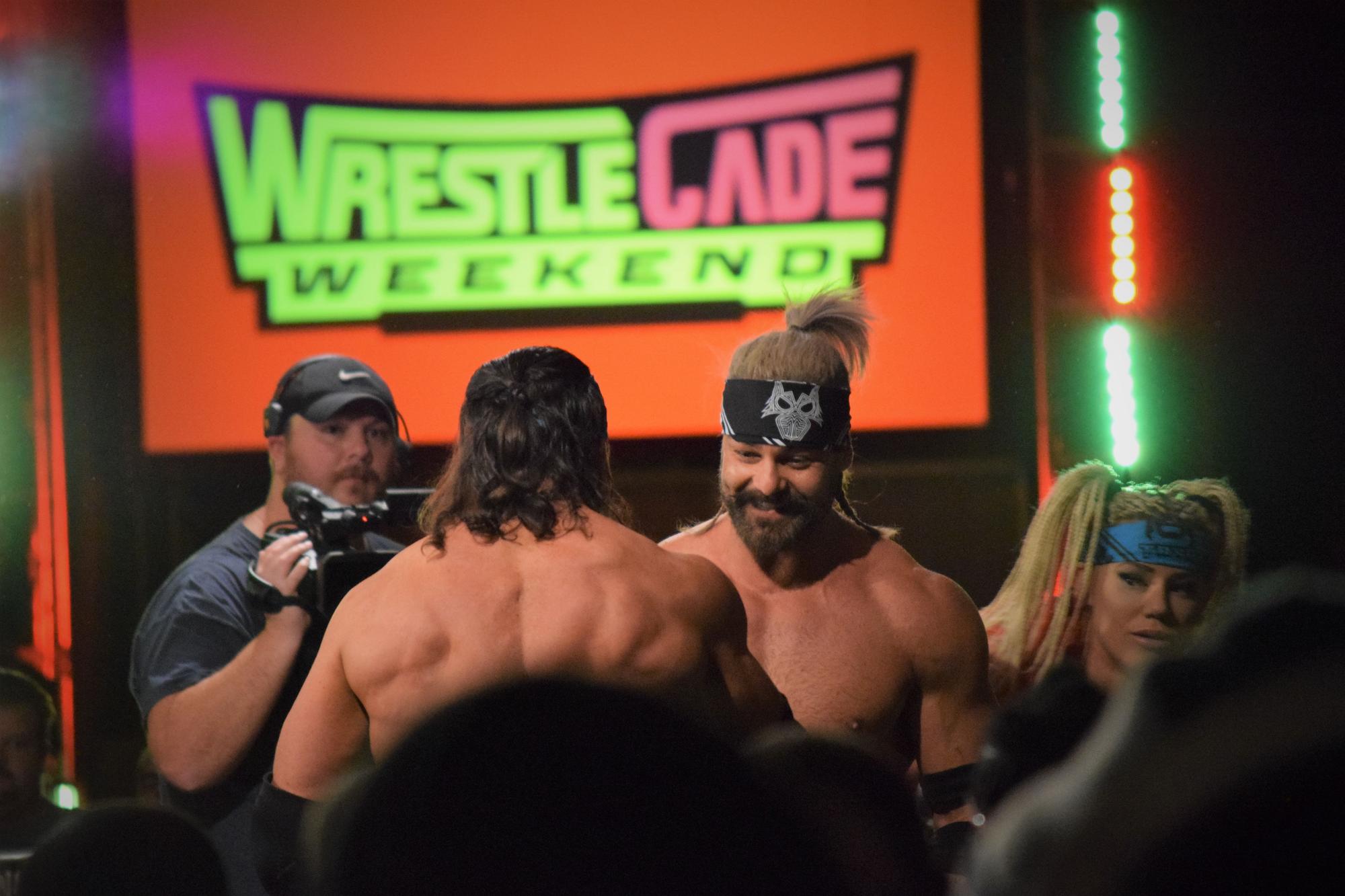 The WrestleCade Supercard on Saturday evening is the heart of the entire weekend. The three of us (me, my buddy, and our new buddy) show up 10 minutes prior to doors opening. And once we're inside, the buzz is contagious. Over 6,000 people have entered the at-capacity room for a night of bodyslams, mayhem, and camaraderie. A dark match see's fan-favorite Billy Gunn lose his title, kicking off rumors of a WWE return. Artist Monteasy comes out to rap the official "WrestleCade Theme Song" in a spot I'm pretty sure is reserved for R-Truth once he leaves WWE. 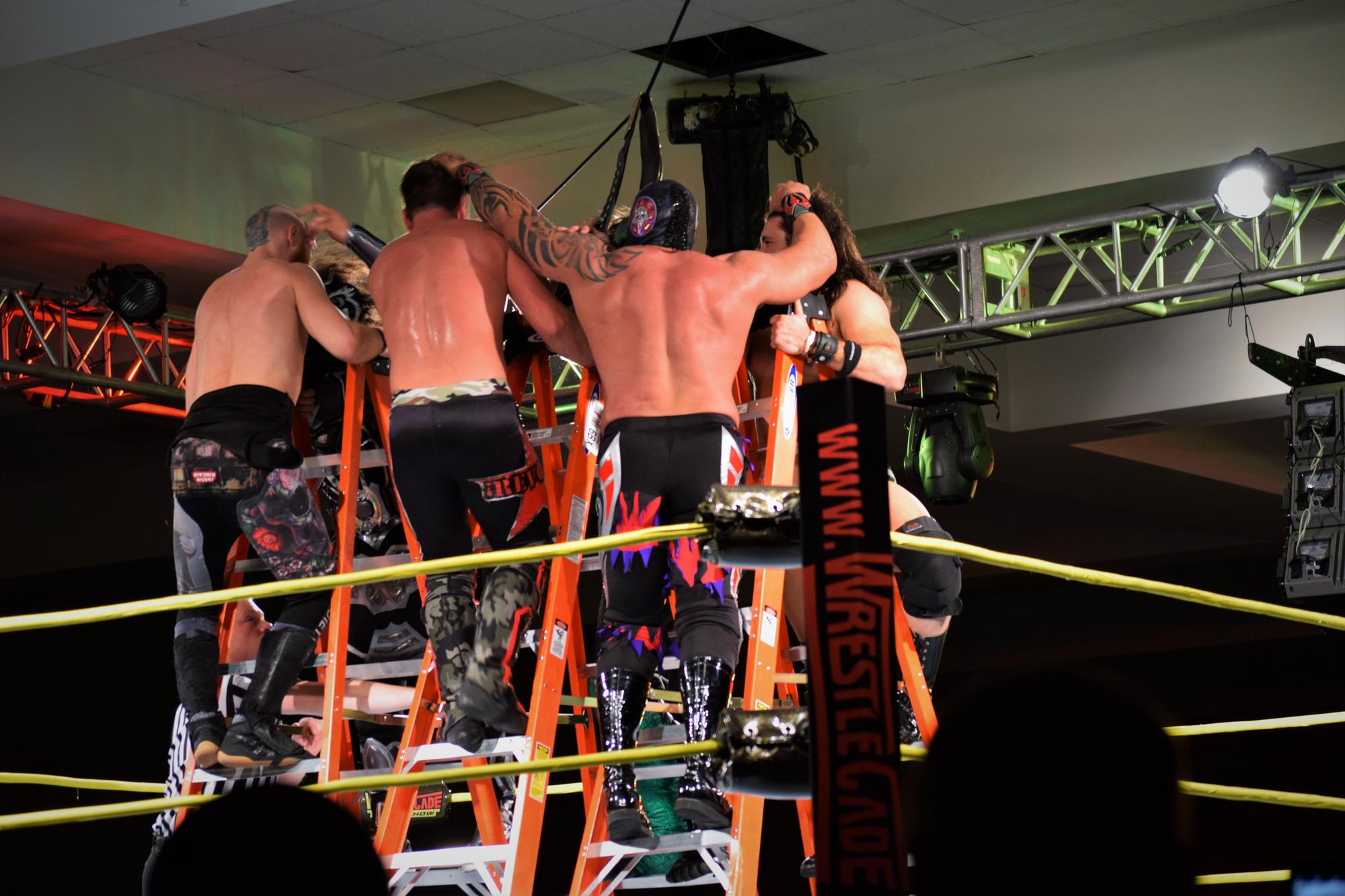 There are tag matches, ladder matches, and even hardcore matches that spill into the crowd. Vampiro quickly loses a casket match, and then vows revenge at next year's event by spewing off a string of explicatives at this family-friendly event. Strangely, he apologizes for this, pauses, and then quickly launches three more f-bombs.

But the pop of the night happened during WrestleCade's annual over-the-top-rope battle royale for the Top Rope Belts championship (marketing, amirite?). Minutes into the brawl, a familiar string of notes hit the arena speakers. It builds into a hefty crescendo. The crowd goes into a frenzy. Guitars blare, drums crash, and James Hetfield's voice growls across the red hot arena.

He shows up somewhere in the crowd flanked by a kendo stick in one hand and signature beer in the other. It's a frat party for the wrestling crowd as Sandman pours beer, after beer, after beer, and the audience is lapping up every single ounce of it. The match is still happening in the ring, sure, but nobody cares - they're too enraptured by this one extreme individual who represents them, the working class. 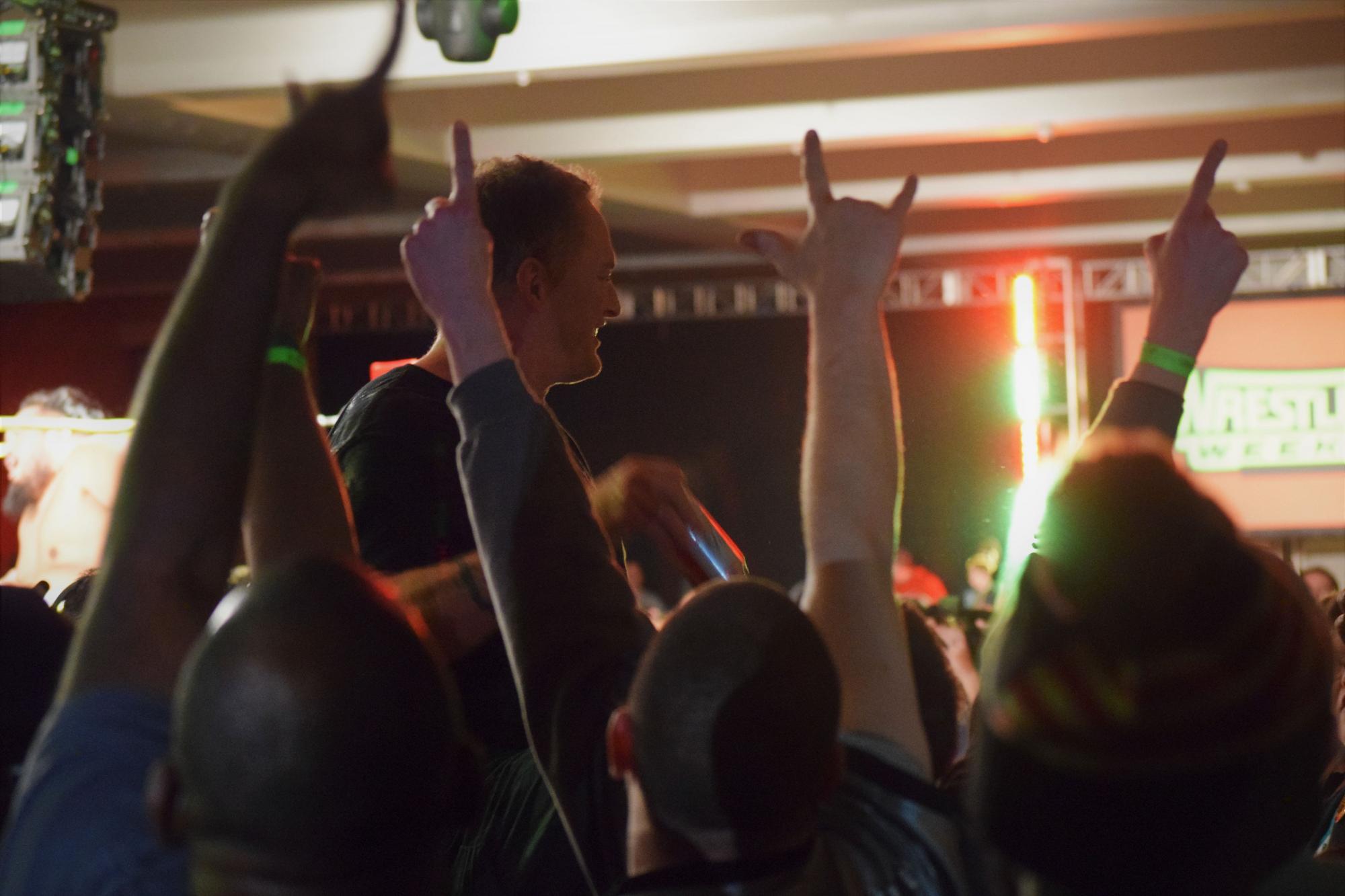 He's quickly eliminated after entering the ring, but it doesn't matter. This one moment is the embodiment of WrestleCade. It's an ECW reunion, or a Luchadore classic featuring Ultimo Dragon and Juevatude Guerrero Jr; it's a chance to celebrate our heroes both old and new with a crowd of best friends we've just met but might never see again. It's a main event that sees two of the hottest guys on the independent scene today lock horns over a historic championship that's either the most important in the world or the least, depending on who you ask.

It's Tracy Myers, the AML owner and Winston-Salem businessman, who you'll find at every event of the weekend making sure the fans are taking care of and the talent are happy. It's Tracy Myers, the WrestleCade promoter, who dotingly checks on his referee who just took a bump outside the ring, and spiritedly scowls at the heels for their great mic work.

It's this weird-ass Lucasaurus Rex gimmick that I won't comprehend in even my drunkest of stupors. (Y'all. This dude hails from "Chokeslam Town." I can't even right now.)

At the end of the night, I reflect on a conversation I had with reigning NWA World Champion Nick Aldis earlier in the day. In the 17 minutes we spoke he detailed visions of what professional wrestling is now, and what professional wrestling should be. We talked unions, and taking care of your bodies, and how promoters can work together to bring that big fight event to fans everywhere, no matter what promotion is in their backyard.

And that's when my second epiphany happens. 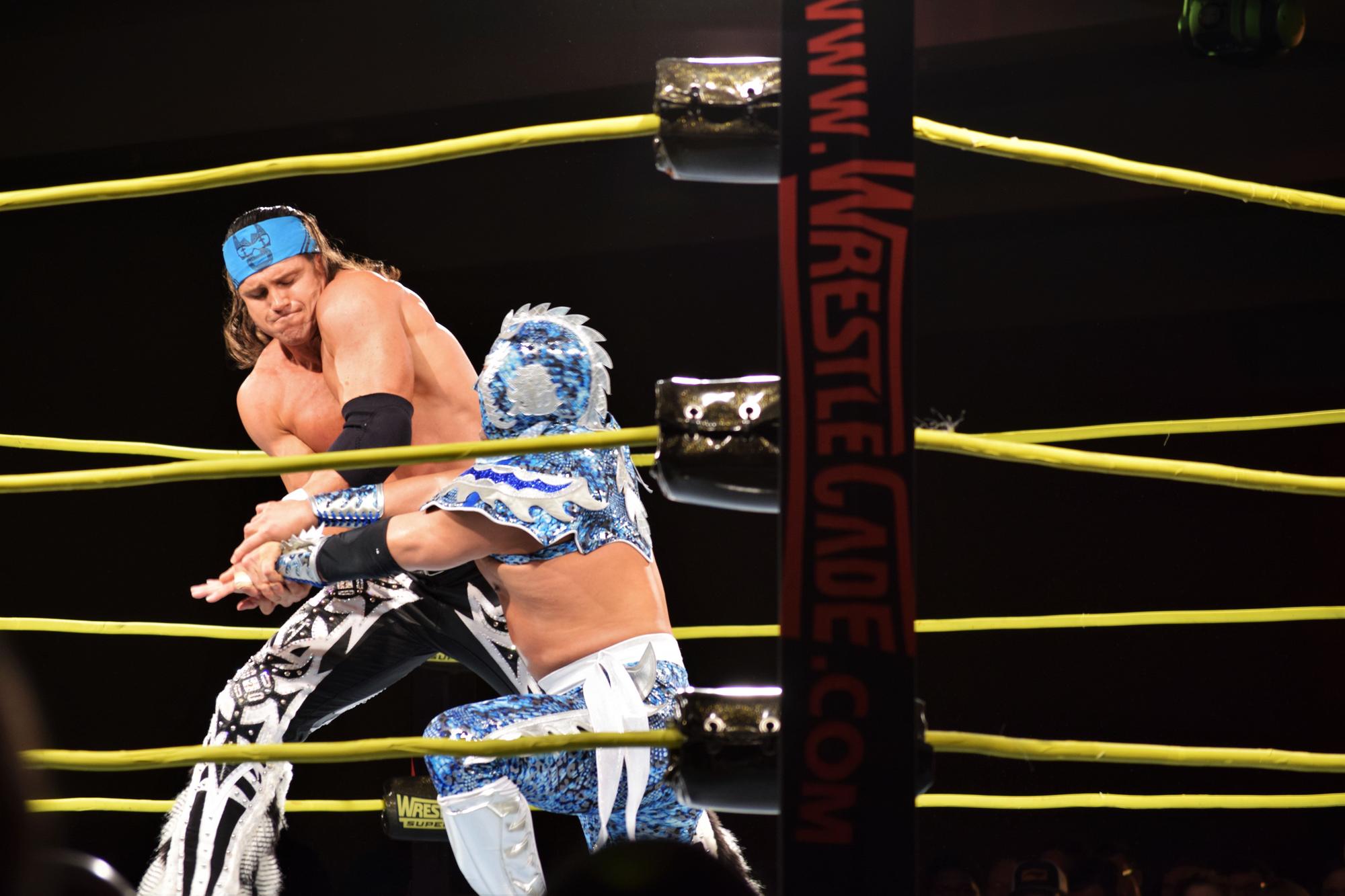 WrestleCade isn't newer this year. Sure, it's bigger. It's better. The list of legends gets longer every year. More fans shlock their way to Winston-Salem, NC with their turkey hangovers, to have their senses shocked-and-awed back to life by the sights and sounds of spandex titans battling over shiny belts. But WrestleCade itself is pretty much the same.

But Ring of Honor? NWA? All In? New Japan Pro Wrestling's stateside shows? Those promotions aren't only reading the playbook that WrestleCade wrote - they're helping fans understand what it means for the business.

Back in 2012, when WrestleCade was a weirdly-named event that hailed itself as a successor to both WrestleMania and Starrcade, and was attended by a few 2,000 fans, it seemed like the kind of novelty indie show that had come to define up the post-Attitude era. Shows that reminded you of what pro wrestling used to be. Back in the glory days.

But here, in 2018, the three-day WrestleCade extravaganza is the embodiment of what wrestling has become since then, and what it's going to become still yet. It's a celebration of professional wrestling's current boom. It's a lead in to new business models where independent wrestlers and promotions find more success than they've ever had before.

Most of all, it's one of my favorite events of the year. 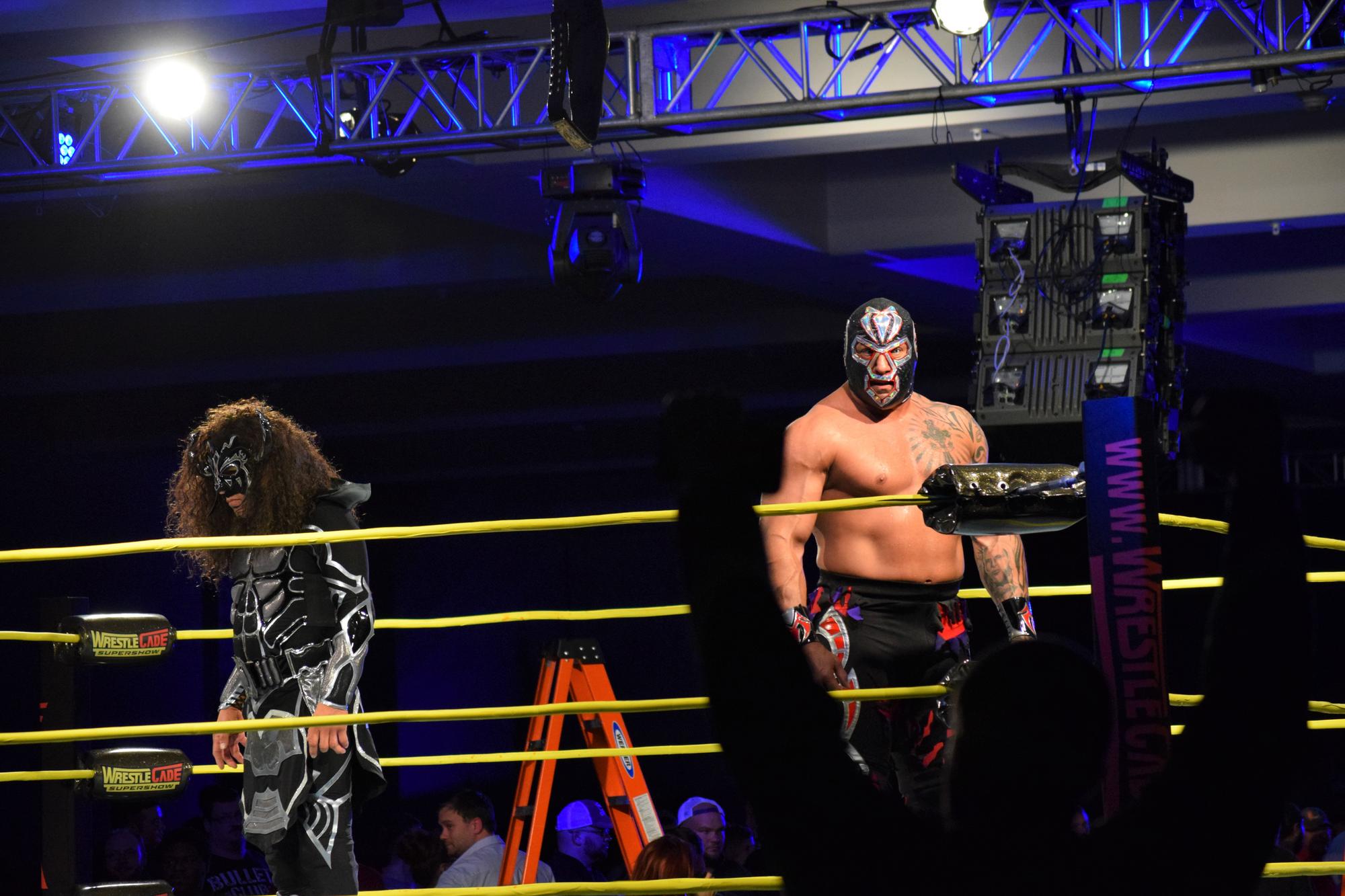 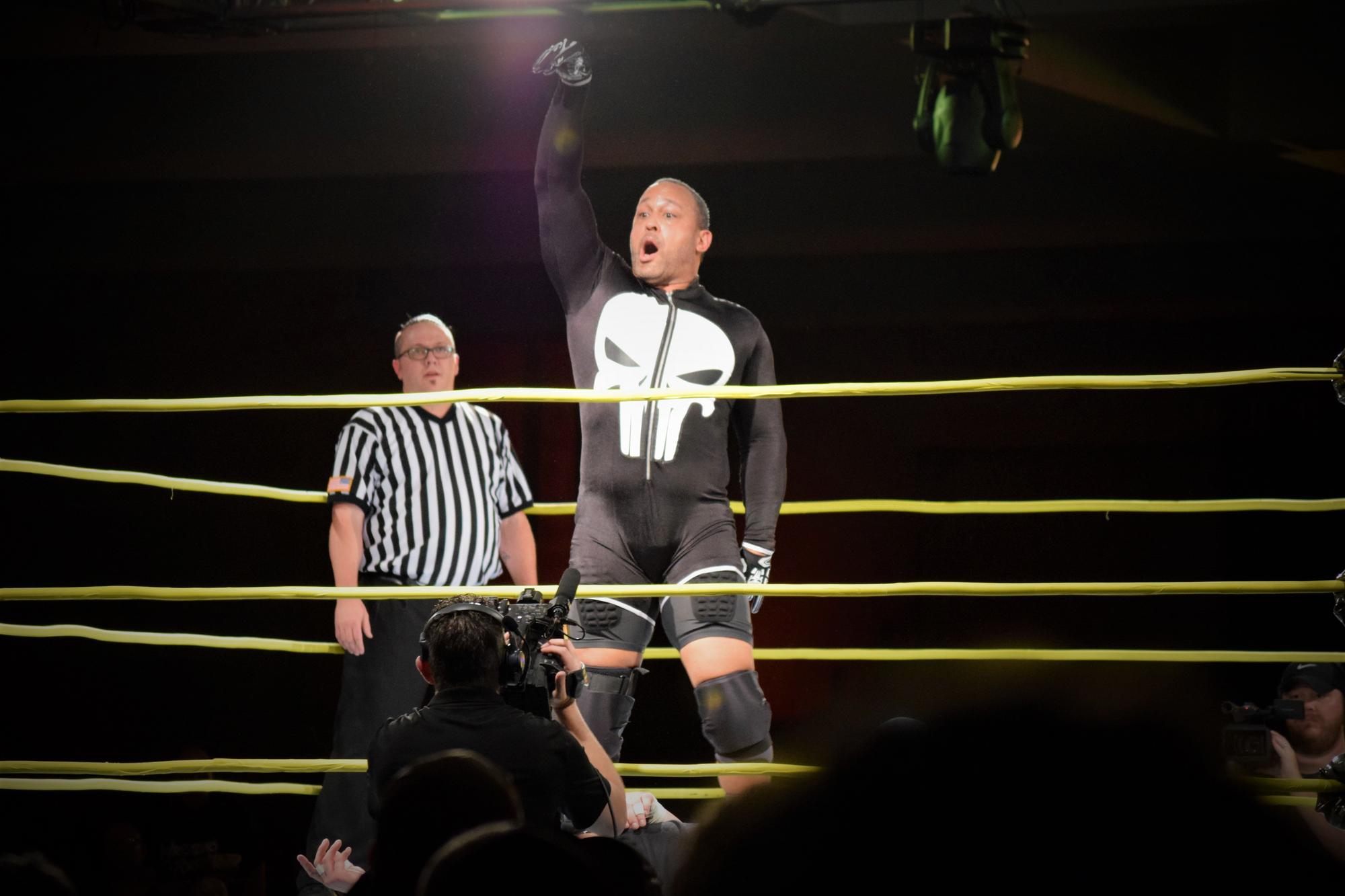 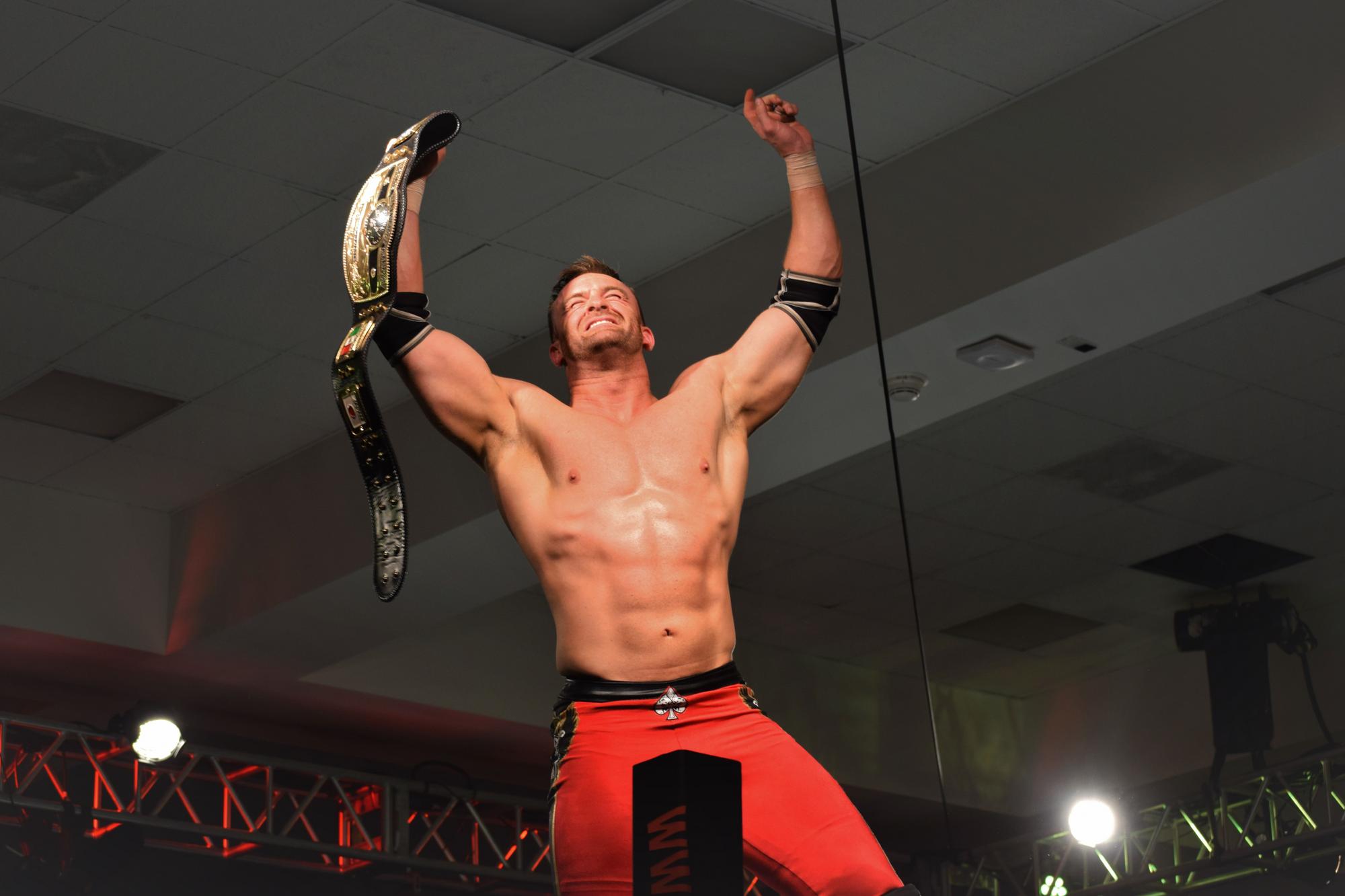