WWE Chief Brand Officer Stephanie McMahon has recently come under fire for comments about how big WWE could one day become; specifically, her remark that, “…there’s no way we can’t be as or bigger than Disney.”

Some critics will point to this as Stephanie being out-of-step with modern wrestling fans, accusing her of having goals that are too lofty for a wrasslin’ organization – after all, the House of Mouse owns both Star Wars and Marvel, while WWE has? RAW & Smackdown? Total Bellas? The Marine Franchise? Archives of Shotgun Saturday Night?

Others will say this is yet another attempt at eventually molding the product into a mass-audience catastrophe, no different than the World Bodybuilding Federation, XFL, or WWE Films initiatives that have all come and gone… (Well, mostly.) By equating WWE with the household Disney brand, they’ll argue, it’s Stephanie’s way of articulating her preference for pop-culture over pro wrestling.

But if you dig into the financials (like us number-nerds are wont to do) the message Stephanie is selling and the data behind the money dovetail into a more cohesive story. A story that tells that maybe, just maybe, Stephanie’s lofty ambitions aren’t so crazy after all. 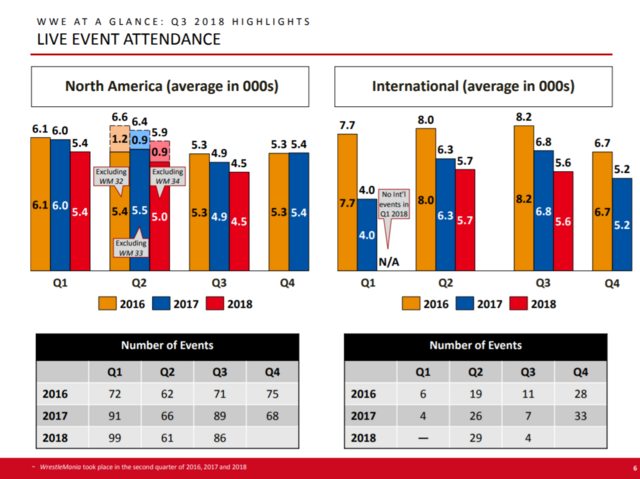 International attendance showed a similar tick downward (although it should be noted that the sample size was much lower as WWE hosted only 4 international events in Q3 2018, which could skew the data).

Average attendance is important because it’s been at the core of the company’s business model for its entire history. Remember, broadcasting professional wrestling was a way to “put more asses in seats” for regional promotions, not the end-all-be-all representation of the product that we see it as today. In the past, the company knew it was doing its job if it could engage fans through its television offerings and then convert them through its ticketed offerings when it came to town.

Also, average attendance tells us the correct story – that is, how many fans ARE choosing to come out – as opposed to live event ticket sales/revenue which are influenced by changing ticket prices, increasing or decreasing operating costs, etc. Said another way: even though live attendance is down by person, the company still made more money from live events than it did in the same quarter in 2016, most likely due to tickets costing more than they did two years ago. (Ticket sales revenue is down year-over-year for every quarter in 2018, however.)

So if you look back at that classic goal of converting TV fans into ticket-buying fans, WWE is ostensibly doing a worse job than it used to.

Now, let’s take that downward attendance and couple it with another key metric: sagging television ratings. 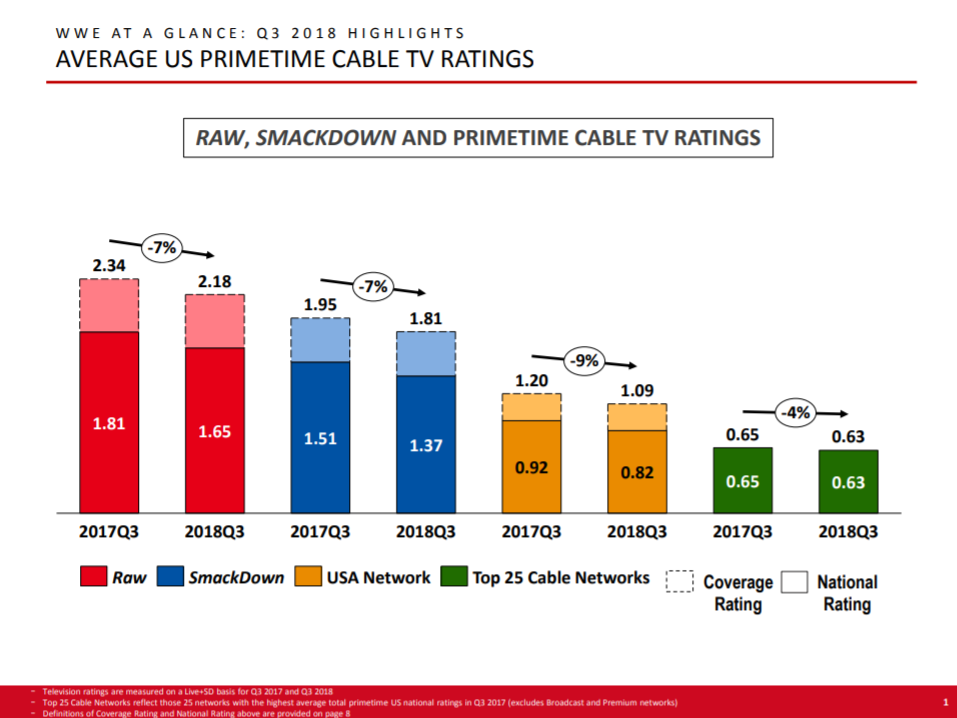 Now, hardcore fans are quick to point to lackluster creative as the reason for RAW and SmackDown audience drop-offs. And if you make the logical jump that fewer TV watchers equals a smaller fan pool to sell live event tickets to, then you could draw a straight line from poor storytelling = fans stop watching on TV = fans stop coming to shows.

First, none of that TV rating data above is surprising when you consider the number of cord cutters has TRIPLED in the last three years, and WWE’s TV numbers just match the wider entertainment trend.

Second, there’s no metric that captures how “good” or “bad” WWE creative is, so to derive any real data from that would be, at best, supposition, and at worst, outright bunk. (Fans who point to the incredible television viewership WWF and WCW earned in the Attitude Era a possible “good/bad” gauge should remember that the top rated show in 2018, The Big Bang Theory, earns only half the ratings of the top rated show of 1998, Seinfeld [https://en.wikipedia.org/wiki/Nielsen_ratings]. Also? Attitude Era “good” isn’t nearly as good as you remember.)

Getting to 1,000 episodes is only possible if you have an entire universe behind you. Thank you, #WWE Universe, for celebrating #SD1000 with us. Here’s to 1,000 more. pic.twitter.com/fVI5B0jTWn

So let’s zoom out for a minute and look at a few other data points:

* On a similar note, WWE continues to bring in more mainstream advertisers. The company recently signed deals with Coca-Cola and Hyundai.

* While average live attendance is down, WWE is still doing big, BIG shows. WWE is claiming 70,000 for Super-Down which Vince McMahon touted (get it?) on the financials call as the “highest attended event outside the U.S. in the past 25 years.”

* Social media numbers are astounding – the company is claiming over 950 million across all platforms. While those haven’t been adjusted for duplicate accounts (so no, those aren’t 950 million unique individuals), the company is up 125 million followers year-over-year, mostly driven by new platforms (i.e. not Facebook and Twitter). That’s good growth.

* Ad-supported Video On Demand also shows similar incredible growth – the company has more than doubled its video views since Q3 2016, to 8.4 billion views, and TRIPLED the total number of hours viewed (meaning: people who watch are choosing to watching more).

And then there’s the 9.99 ton elephant in the room? the WWE Network. Without beating the same drum I’ve been beating for years (streaming is the future, WWE was smart to get ahead of the cord-cutting revolution, yada yada yada) it’s safe to say that subscriber numbers are solid if not quite where WWE would want them to be. Notably (and unsurprisingly) WrestleMania continues to be a subscription-driver every year – the Showcase of the Immortals helped WWE break 2 million subscribers for the first time EVER in 2018.

So, context is great and all, but what’s the point?

While declining TV ratings and live attendance might be worrisome, they’re most likely symptoms of the quickly-evolving mediascape and thus driven more by overall trends in entertainment consumption (and NOT by people being driven away from the product).

In fact, social media and video metrics show us that more fans than ever are engaged with WWE. Co-Presidents George Barrios and Michelle Wilson spoke at length about how fans are digging into the WWE Network shows, and how they view growth on streaming platforms/streaming social media as having huge potential for the company.

Also, the company is far from being in any kind of financial danger. It’s still making a profit every quarter, and it’s making that profit in new and creative ways (brand licensing, reality TV shows, short-form ad-supported videos) that actually cost the company less money to produce. Sure, the stock is down – anybody will tell you that investors are a finicky, risk-averse bunch who hate new, unstable, untested models of money-making. And unfortunately, that’s all the media industry is in 2018.

But? the traditional house show model is absolutely broken.

Vince admitted this as much on the phone call. He remarked at one point, “We know what’s wrong with our live events and it’s somewhat, I don’t want to call it (an) antiquated presentation?” and said they’re working to “reimagine” those events.

In what way? You could make assumptions based on the way WWE is leveraging its Network for non-traditional shows and guess that maybe more house shows become televised? or maybe live events are treated more like PPVs or TV. Maybe the company is going to alter its tour schedule and do more international events in new markets.McMahon refused to elaborate other than to offer, in a Trump-esque fasion, “…but we know how to fix things. If something’s wrong and you don’t know how to fix it, you’re in trouble. We know how to fix that.”

And as for that Stephanie remark about being as big as Disney?

WWE’s approach to character-first roster-building (rather than being a strictly story-driven product) definitely offers the company more avenue streams for its brand. We already have Total Divas, Total Bellas, and Miz & Mrs, all character-driven shows that extend those personas beyond the squared-circle. WWE has invested heavily in non-traditional TV shows for its Network, creating everything from cartoons to (soon) cooking shows. WWE owns trademarks on most of its roster, which the company then converts into action figures, t-shirt sales, and cereal cross-promotions.

It might seem crazy that WWE would even mention itself in the same breath as ANY entertainment behemoth, let alone the House of Mouse. But also, Marvel once carried itself from a 1996 bankruptcy to a multi-billion dollar Disney acquisition just 13 years later.

Reminder: that’s WWE with an emphasis on the “entertainment.”