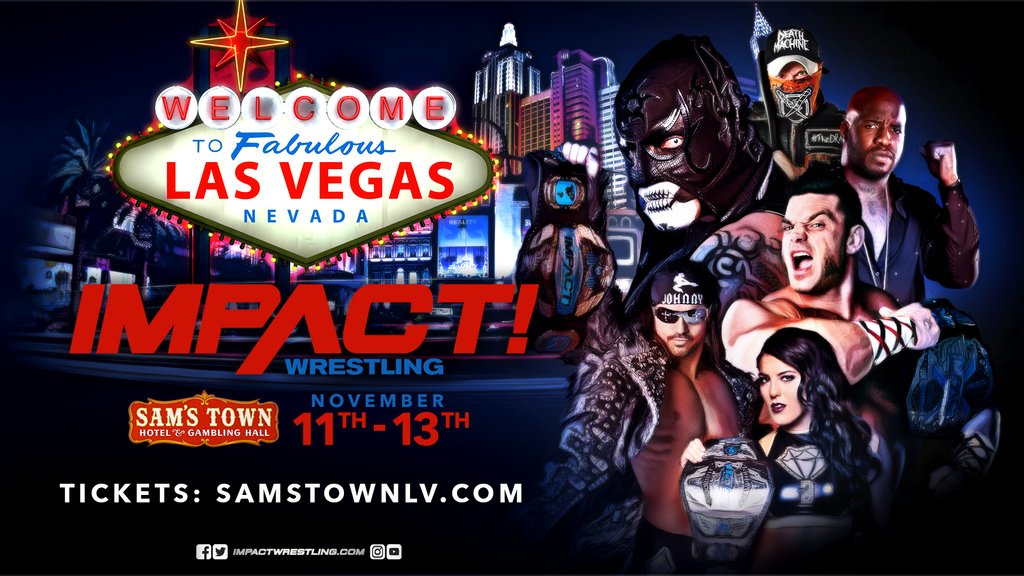 Thanks to Wrestling Inc. reader MrEddyG for sending in these results from tonight's Impact Wrestling tapings in Las Vegas:

* "The Business" Hammerstone defeated Brubaker with a front suplex.

Before the matches began, Josh announced the last two Impacts on Dec. 20th & 27th would be "Best Of" shows, with fans voting for their favourite matches to be shown on the 27th.

* Mixed Tag Match: Tessa Blanchard & Moose vs. Taya Valkyrie & Johnny Impact. Taya gets Tessa to tap out with an STO. Moose attacks Johnny with a chair before Killer Kross stops. Tessa gets upset with Kross, and Moose tries is to settle her down. Cage comes down to attack Moose & gives Kross a German Suplex, but Kross gets up & no-sold it. He, Moose, & Taya leave. Cage helps Taya & Johnny up as the fans chant "Option C!" Cage nods to the crowd, and leaves.

* "The Mini-Draw" Jake Crist (w/ Dave & Sami Callihan) vs. "Chocolate Thunder" Willie Mack. Crist wins after all kinds of interference from Sami & Dave. He qualifies for the ultimate X match at Homecoming.

* Heather Munroe vs. Allie (w/ Su Yung). Allie gets the pin with a Code Breaker. After the match Allie gets a glove and applies a Mandible Claw. Kiera Hogan arrives, throws Su into the stairs, and finally gets Allie to stop. Su recovers and attacked Kiera, then Allie gives Kiera a Code Breaker.

* Matt Sydal vs "All Ego" Ethan Page. Page advances to Ultimate X with a roll after a series of pinfall attempts. Sydal raised Ethan's hand after in a classy show of respect.

* Rich Swann vs Jake Crist, Dave & Sami are with him. Rich wins with a roll up to qualify for Ultimate X. He's attacked by Dave after, but Sami pulls him off and tried to make peace. Willie Mack appeared and went after the Crists giving Dave a Stunner. He tries going after Sami, but Rich held him back. OVE then retreat.

After the match, it was announced Impact would return to Las Vegas from Feb. 15-17.

* Trey Miguel vs Trevor Lee in another Ultimate X qualifier. Trey wins with a Double Knee Press off the top rope.

* Moose "Mr. Impact Wrestling" vs "The Machine" Brian Cage. Eddie Edwards comes down wearing a hospital gown and attacks Moose on the outside for the DQ. He hit him with slippers, the kendo stick and more before Moose finally retreats.

* The moronic turkey suit is brought down by the referees... why they're doing this I have no idea. 5 on 5 match Team #1: Disco Inferno, Rohit Raju (w/ The Desis) Katarina, Jake Crist (w/ OVE) & Eli Drake vs. Kikut Aro, Dezmond Xavier, Alisha Edwards, KM & Fallah Bahh. All kinds of mayhem with Disco taking Steam Rollers from everyone, including Alisha AND the young referee! Bahh pins Disco with a Banzai Drop. Disco refuses to put the Turkey Suit on until Scarlett Boudreaux convinces to do it because she "likes a man who doesn't take himself so seriously." Then when he puts it on, she says he looked like an absolute idiot.

Disco leaves, but KM tells him to return and announces that it's Disco's Birthday. KM & Fallah sing "Happy Birthday." Disco gets upset and says he's leaving if they have no gifts for him. KM says they all chipped in to get him this stupid turkey suit. Disco stomps off and takes off the suit, and leaves to end the show.