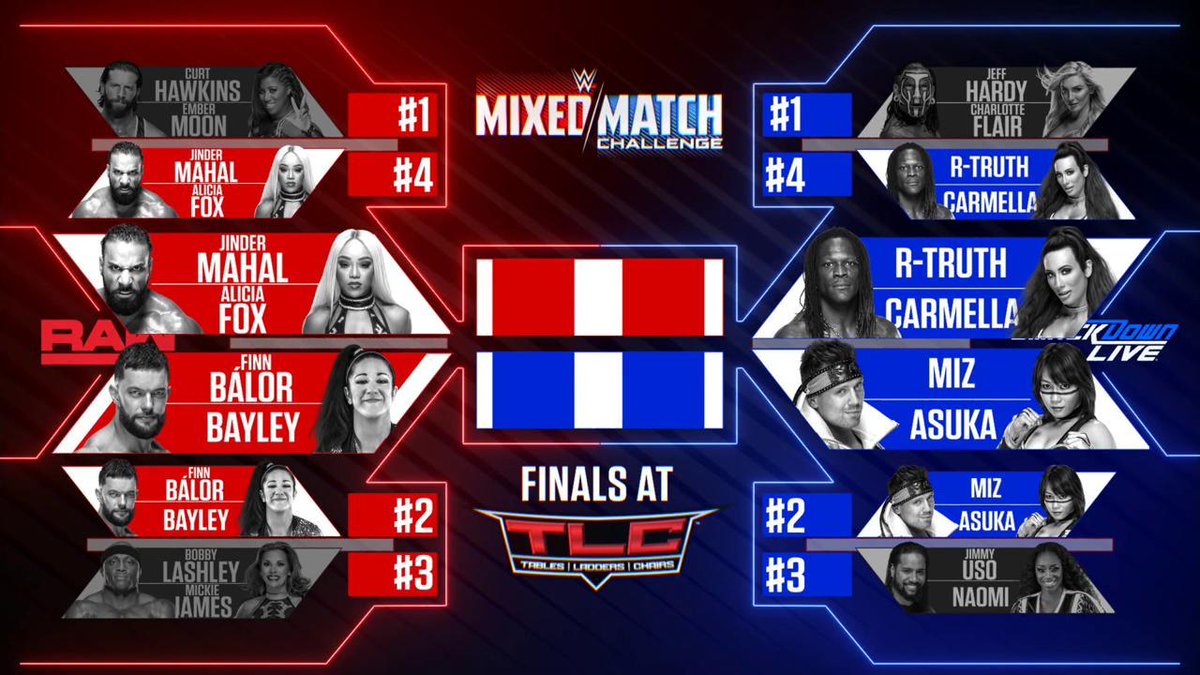 Week 12 of WWE's Mixed Match Challenge Season 2 saw the MMC Playoffs continue with the brand finals being confirmed. To set up the semi-finals, R-Truth and Carmella pulled an upset win over Jeff Hardy and Charlotte Flair while The Miz and Asuka defeated Jimmy Uso and Naomi in the other match.

The finals of the SmackDown side are now official with R-Truth and Carmella vs. The Miz and Asuka. The RAW finals were confirmed last week - Jinder Mahal and Alicia Fox vs. Finn Balor and Bayley.

The semi-finals will take place next Tuesday night on Facebook Watch with Mahal and Fox vs. Balor and Bayley plus R-Truth and Carmella vs. Miz and Asuka.

The RAW vs. SmackDown finals of the round-robin style tournament will take place at the WWE TLC pay-per-view on December 16 in San Jose, and the winners will earn the #30 spots in the men's & women's 2019 Royal Rumble matches this coming January, plus an all-expense-paid trip to anywhere in the world that they want to go.

Below are photos and videos from this week's episode along with backstage footage of Kayla Braxton with Team Awe-Ska, Flair and Hardy:

The SEMIFINALS are SET for NEXT WEEK! #WWEMMC

EXCLUSIVE: It seems @mikethemiz's shoes were what drove him and @WWEAsuka to victory tonight on #WWEMMC... pic.twitter.com/yko2QmDCTL

Previous Article
Big Main Event Taped For WWE Tribute To The Troops, More From The Ft. Hood Tapings (Videos, Photos)
Next Article
Chris Jericho On Recent Meeting With Impact, Rumors Of All Elite Wrestling, Being Done With The List