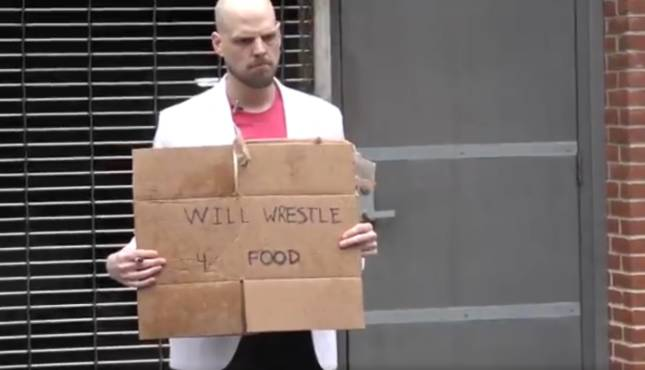 Former WWE creative team member Robert Evans has tweeted a parody video that pokes fun at his recent departure from the company.

As seen below, the scene starts with Evans being booted from the company. He said, "Hey, stop it, hey, what are you doing? You can't treat me this way. You know, you're gonna regret this because I was pretty good at my job. I wrote that one Baron Corbin promo that was OK..."

It was reported that Evans was fired during WrestleMania 35 weekend because Bret Hart's WWE Hall of Fame speech included a mention of Vince McMahon. Evans reportedly helped write Bret's speech but there is a longstanding rule that Vince is not to be mentioned during speeches. DX later made jokes on what happened with Evans and the rule during their induction speech. It was later reported that Evans quit the company before they could fire him. Evans also tweeted that he quit.

Evans also poked fun at these reports in the video with Vince's name bleeped out. "I can't even say it in my real life?," he asked after Vince's name was censored a few times.

Evans, who made his indie debut back in 2001, then created a cardboard sign that said he will wrestle for food. He called that a bad idea because he doesn't want to wrestle, but then he changed the sign to say, "Will Wrestle Orange Cassidy For Food."

Cassidy is an up & coming indie wrestler, currently wrestling for EVOLVE. After changing his sign to say he will wrestle Cassidy for food, Evans mentioned former WWE SmackDown co-lead writer and WWE Hall of Famer "Road Dogg" BG James, who is still with the company. "Man, Road Dogg's gonna hate this match," he said.

You can see the full skit below: