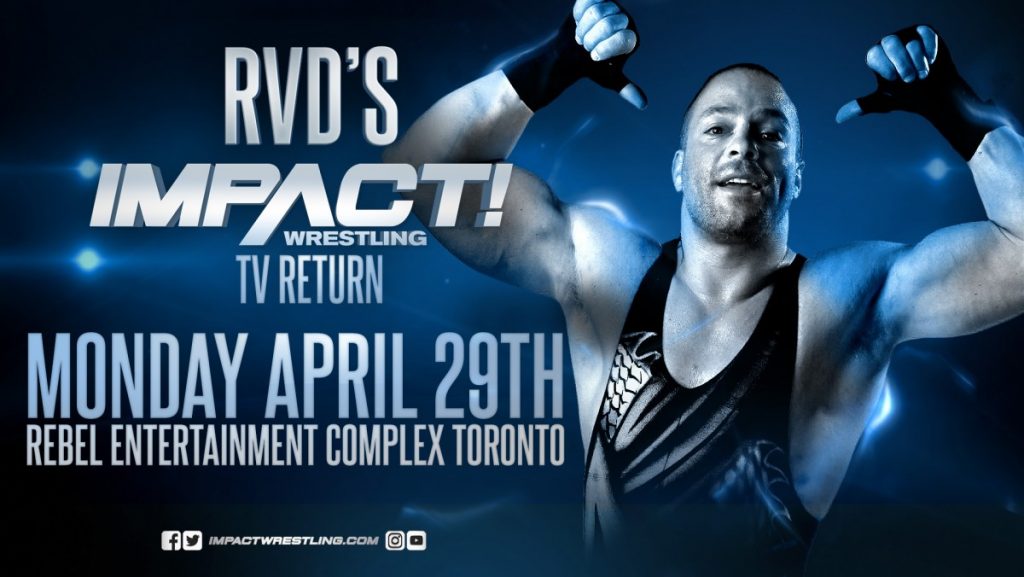 Thanks to Wrestling Inc. reader MrEddyG for sending in these results from tonight's Impact Wrestling tapings at the Rebel Complex in Toronto, Ontario:

"Unbreakable" Micheal Elgin comes down to a big ovation. Elgin said it's a time honored tradition to celebrate with his fans. He asks where he is & said he put him in the hospital. Elgin asked why the Canadian fans cheered for Cage we should be cheering for people like Wayne Gretzky, GSP and him. Elgin claims he left NJPW to take the title from Cage. Johnny Impact arrives and calls Elgin another big muscle headed meathead with a tiny brain. Both try to take credit for putting Brian in the hospital and argue about who should the next #1 contender. L.A.X's music plays & Konnan comes down. He says L.A.X. & The Lucha Brothers are familia and is represented by him, and that Pentagon should be the next #1 contender. Elgin grabs Konnan and tells him before he leaves he wants to send a message to Pentagon. Pentagon comes down for the save and a brief brawl between the three happens ending with Elgin destroying the security guards, and standing tall in the ring.

* Ace Austin vs Petey Williams. Ace fakes a handshake earlier & transitions into a headlock. Ace wins with the Ace Crusher.

* Rosemary (w/ The Undead Brisemaid on a collar) vs Kiera Hogan. Rosemary knocks Kiera off the ramp to the floor and Su Yung's music plays. Yung the other bridesmaids attack Rosemary for the DQ. Eventually the Undead Bridesmaid is freed and they all outnumber Rosemary in the ring. Kiera recovered outside, but didn't help Rosemary and walked to the back as the crowd booed. The attack on Rosemary continued and Su got a Panic Switch to end it.

* Eddie Edwards vs Fenix. Eddie twice tried to get "Kenny" but Fenix both times sneak-attacked. Killer Kross comes out to watch at the top of the ramp. Kross creeps closer to the ring and grabs Kenny and appeared to offer him to Eddie only to hold onto as Eddie tried to pull it away. Eddie then turns around and is pinned. Kross leaves with Kenny.

Former WWE Champion Rob Van Dam is next to a big ovation and "Welcome Back" chants. He says it's flattering to come back, and to see he was an inspiration as everyone uses his moves (sounded a bit heelish). "All Ego" Ethan Page introduces himself he brings two chairs in the ring and invites him to sit down. RVD refuses. RVD asks who he was again? Ethan asks if he ever has seen one of his matches. RVD says no. Ethan says he never respected RVD or took one of his moves. RVD's had enough and challenges Ethan to a match, who backs down and says next week. Page tries to attack with one of the chairs but RVD kicks him in the face leaving him down.

* #1 Contender's match for the Impact World Title: Johnny Impact vs Micheal Elgin vs Pentagon Jr. Elgin wins with a huge lariat, BuckleBomb, and The Elgin Bomb on Johnny. Excellent match. Pentagon is helped to the back by two referees.

* Tessa Blanchard is down first to join Don & Josh on commentary. Taya Valkyrie vs. Madison Rayne. Taya first throws her robe at Don for some reason before the start. Madison is wearing a weird looking long, puffy black dress. Taya toys with Rayne early completely dominating and says that Madison has to earn a title match. Taya keeps talking crap all match long, but Madison applies a half Boston Crab, and Taya tapped out quickly! Strange booking here.

* Killer Kross vs Tyson Dux. Kross dominated the match and gets the submission victory with The KrossJacket

* Jordynne Grace vs Alexa Nicole. Grace toys with Nicole with a Jackhammer and a mini-Cesaro Swing (4 Rotations) before mercifully ending it with The Grace-Driver.

* Gama Singh is out next and calls Toronto a great city-but not as good as London, Paris and Tokyo, and follows that up by saying the Leafs are good, but not as good as the Bruins to big heat. He then introduces the Desi Hit Squad: Rohit Raju & Raj Singh, who will face the Deeners (Cody & Jake) vs Brett Banks & Aiden Prince, vs The Rasclaz (Dez & Wentz). Rohit rolls up Cousin Jake for the surprising win.

* Main Event 8 man tag match: X Division Champion Rich Swann, Willie Mack, Fallah Bahh (w/ Scarlett Boudreaux) & Tommy Dreamer vs OVE (Dave & Crist, Madman Fulton & Sami Callihan) in a NO-DQ match. All kinds of weapons used here: a huge ladder, trash cans, frying pans, and chairs. Bahh gets powerbombed by Fulton through two upright chairs and then is doublestomped by Dave with a chair wrapped in barbed wire, but Bahh kicked out! Legos are introduced and Tommy hits a Double DDT onto Jake & Sami onto the Legos! Sami eventually gets a piledriver onto Willie to win for OVE. Great match!