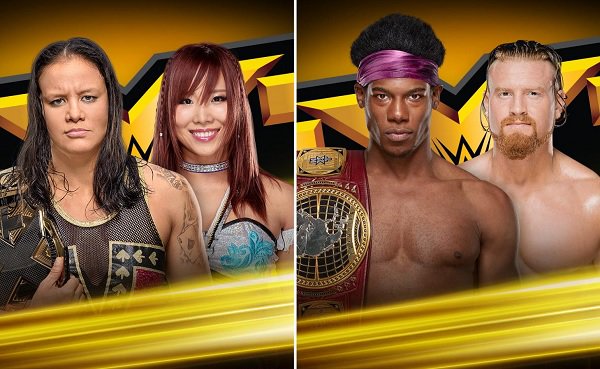 Remember to join us for our live Viewing Party at 8pm ET tonight.

* NXT North American Champion The Velveteen Dream retained over Buddy Murphy. Good match. Crowd is split on this one, but maybe just a bit more towards Velveteen. Dream cuts off Murphy on a dive and poses in front of him, but Murphy grabs his arms and hits the kamigoye for a 2. Murphy with a huge flip dive over the top rope to the outside. Velveteen fights back out of the corner and hits a huge superkick. They trade strikes and Dream hits a springboard axe handle then his top rope axe handle. Dream with a code breaker for 2. Murphy with a tornado neck snap on the top rope. They fight on the top, and both end up falling to the outside, but beat the 10 count. Murphy with a DDT for a nearfall. Murphy hits a sunset flip, but Dream counters into the DVD for 2. Dream goes for up top, but Murphy hits the Cheeky Nandos kick and a sitout powerbomb for 2. Murphy with a flying knee off the apron. Murphy can't get Dream in for the 10-count so he breaks the count and rolls him in, but Dream hits a Fame-asser as his comes through the ropes, the DVD, and the Purple Rainmaker for the win

* We're shown a video of The Undisputed Era arguing immediately after Takeover, before Adam Cole yells at the cameraman to turn the camera off

* Raul Mendoza defeated Riddick Moss. Riddick is working with his new Riddick Regimen gimmick, basically an over-obsessed bodybuilder. Raul in control early. Riddick catches him doing a springboard crossbody, curls Raul a few times, the tosses him. Riddick with a running charge in the corner, then a gorilla press into a spear for 2. Riddick goes to drink his water bottle, but Raul slaps it out of his hand and runs wild. Raul hits a twisting springboard splash for the win

* New NXT Champion Johnny Gargano comes out to a huge reaction. Johnny starts to cut a promo, but The Undisputed Era sans Roderick Strong interrupt. Adam Cole says he beat Johnny and says if it were any other match, he'd be champion. Johnny says he did lose the first fall, but then he tapped Adam out in 2 straight falls. Johnny says if BayBay wants to grow a pair, he'll add more tallies to the scoreboard. Cole makes his way to the ring when Roderick Strong attacks Johnny from behind. Undisputed Era lay Gargano out and leave the ring

* Dominik Dijakovic defeated enhancement talent Aaron (didn't catch the last name). Dijakovic hits a giant knee to the face at the bell and gets the pin. After the match, Dijakovic cuts a promo about being driven to opportunity and says he wants the NXT North American Title and tells The Velveteen Dream to "Feast Your Eyes"

* NXT North American Champion Shayna Baszler retained over Kairi Sane by DQ. Per the stipulation, Sane will no longer receive a title shot because she lost. Kairi with a hot start hitting a dive to the outside. Shayna takes control and hits a stiff knee in the corner for 2. Kairi ducks a knee and hits a spear. Kairi locks in the Anchor but Shayna gets to the ropes. Kairi with the Insane Elbow to the back, but Shayna catches her up top going for it again. They fight and Kairi hits a double stomp to Shayna in the tree of woe. Kairi goes for a knee off the apron but Shayna moves. Shayna attacks the arm, Kairi gets to the ropes, but rolls out and the ref calls for a doctor for Kairi's arm. Io Shirai runs down to check on Kairi, but Shayna pulls Kairi back in the ring. While Shayna is standing on Kairi's arm, Io attacks Shayna for the DQ. Marina Shafir and Jessamyn Duke attack Io as Shayna stomps on Kairi's arm. The MMA Horsewomen leave as Kairi and Io are left in the ring. After the match, the crowd gives Kairi a standing ovation. Kairi bows at the top of the ramp and waves to the crowd as she leaves