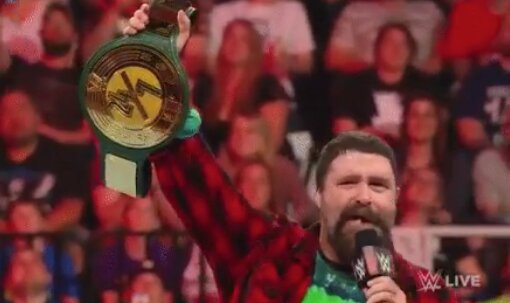 Titus O'Neil won a Scramble to become the first-ever WWE 24/7 Champion but he was then pinned by Robert Roode, who is the current champion. The Scramble also featured Drake Maverick, No Way Jose, EC3, Luke Gallows, Karl Anderson, Mojo Rawley, Eric Young and Cedric Alexander.

Foley announced that the title will be open to Superstars from WWE NXT, NXT UK, RAW, SmackDown and 205 Live rosters. He also said Legends will be able to show up and win the title.

The WWE 24/7 Title will be able to change hands at any time, any place, as long as there is a referee there. Foley said falls will count anywhere, similar to the old 24/7 rule for the WWE Hardcore Title. Foley also indicated that the third hour of RAW each week will see the title be up for grabs.

Below are photos and videos from tonight's segment:

The locker room is making a RUN for it to become the 1st #247Champion! #Raw pic.twitter.com/tEJMlWeuii

He got it! @TitusONeilWWE is the FIRST #247Champion! #Raw pic.twitter.com/NJvqjn65CG

WHAT THE?? A title change has already happened! @RealRobertRoode is the NEW #247Champion!! #Raw pic.twitter.com/F5q79zrmIb