- WWE posted this new video looking at Roman Reigns and how he's back better than ever from the recent battle with leukemia. Reigns talks about his path back to the ring, his family, and how he plans on getting back to the top of the WWE mountain.

"I've never had an opponent that's pushed me to this level, that's in a strange way made me a better person, made me feel more connected and truer to who I really am," Reigns said of cancer. "This is the one rivalry that's going to do more for people than any wrestling match could do. I know I've shown a softer side and a very thankful and focused side, but I don't want people to be confused about this. When I step into this building, it's business. Nobody took my title from me, nobody took that position on the mountain from me. I'm not asking for anybody to give it to me, but don't be surprised when I take it."

- WWE issued an e-mail blast today to hype Shane McMahon's announcement on the new SmackDown Tag Team Champions that will be made during tonight's show. As seen below, the graphic features Heavy Machinery, The B Team, Rusev and Shinsuke Nakamura, plus The New Day's Xavier Woods and WWE Champion Kofi Kingston.

There's no word yet on which teams they have considered but a WWE Editor's Pick article over the weekend included these teams along with the team of Shane and Elias, plus the team of Ali and WWE Intercontinental Champion Finn Balor.

Below is Cathy Kelley's preview for tonight along with the hype for the vacant SmackDown Tag Team Titles:

SmackDown LIVE was thrown for a loop last week when, due to Jeff Hardy sustaining a knee injury at the hands of Lars Sullivan, The Hardy Boyz had to relinquish the SmackDown Tag Team Titles.

With the state of both the blue brand's tag team division and the titles in question, Shane McMahon will arrive on SmackDown LIVE this Tuesday to crown new SmackDown Tag Team Champions. 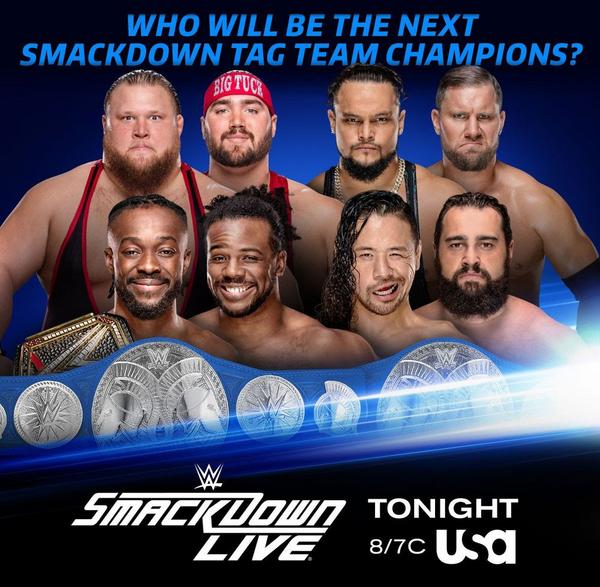