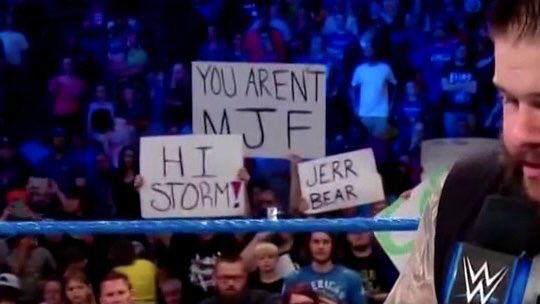 WWE reportedly had their security confiscate a fan sign related to All Elite Wrestling star MJF at last night's WWE SmackDown from the BOK Center in Tulsa, Oklahoma.

The sign made it onto the broadcast and could be seen during the earlier segments by Kevin Owens, and Shane McMahon, Elias and Drew McIntyre. It read, "You Aren't MJF" in big bold letters.

Fans in attendance noted that the MJF sign was taken by security. Another "Save Us HHH" sign was also confiscated. One fan claimed on Twitter that WWE was "taking signs left and right and throwing them away" during the show. It was also noted that there were a lot of "AEW" chants at SmackDown and that taking the sign brought on another chant.

You can see the signs and the related tweets below:

A reminder that there's (thankfully) only one @The_MJF. pic.twitter.com/inS4k4WzSg

The bald guy in the suit confiscated this sign :(

Yes. They are taking signs left and right and throwing them away.

Lol they took a guy's "save us HHH" sign #SDLive

Yea and his other signs. Apparently they were too big or he was blocking people too much

They took this guys sign and threw it away. Wow smh https://t.co/bPK3tuBLlA