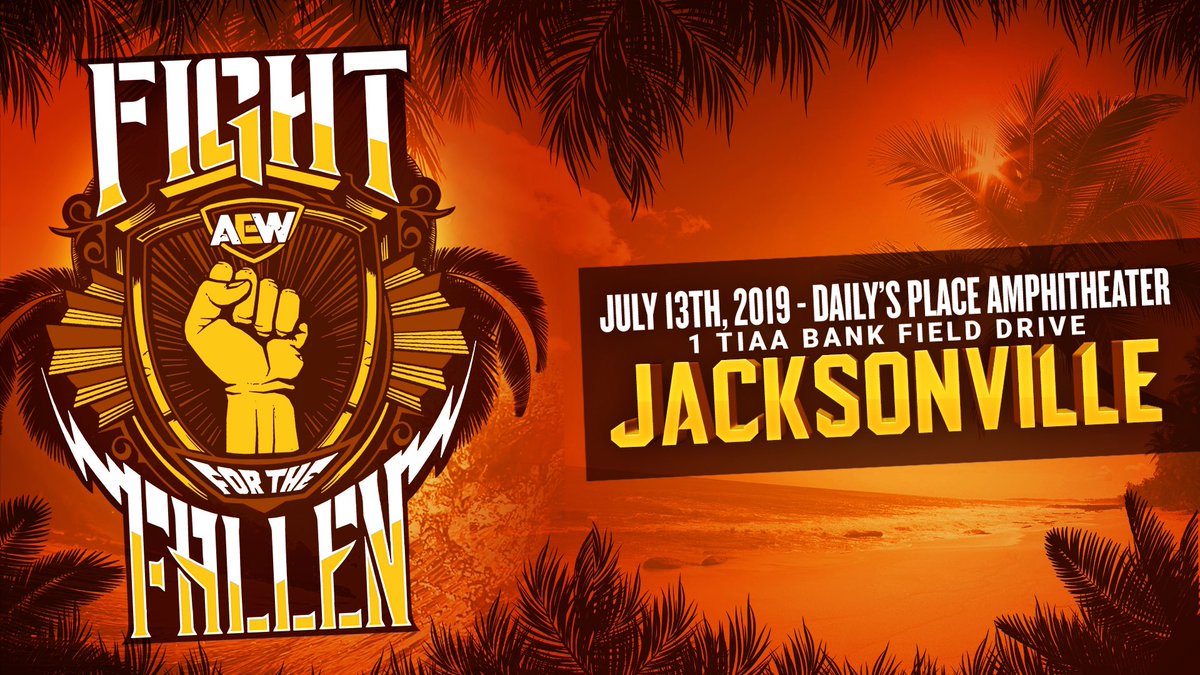 AEW issued us the following press release today to announce that Farah & Farah will be the presenting sponsor for their Fight For The Fallen event.

Fight For The Fallen will take place on Saturday, June 13 from Daily's Place in Jacksonville, Florida. A portion of proceeds from the event will be donated to victims of gun violence. This will be the third event from AEW.

Kenny Omega vs. Cima, Allie vs. Brandi Rhodes and The Young Bucks vs. Cody Rhodes and Dustin Rhodes have been announced for the show by AEW.

Below is the full announcement with comments from AEW President & CEO Tony Khan:

JACKSONVILLE, FL (June 19, 2019)  All Elite Wresting (AEW) today announced that the respected regional law firm Farah & Farah has been named Presenting Sponsor of the upcoming FIGHT FOR THE FALLEN event in Jacksonville. With 15 offices throughout Florida and Georgia, Farah & Farah has been supporting and protecting families in the region for the past 40 years.

The integrated sponsorship with Farah & Farah includes cross-promotional activities with AEW talent, customized co-branded graphics, signage on the ring apron and in-venue, and a variety of digital and social media activations.

FIGHT FOR THE FALLEN will take place in Daily's Place Amphitheater at TIAA Bank Field at 7:30 p.m. ET on Saturday, July 13, just a few feet from where AEW was first introduced to the world in January. Stars scheduled to appear include Cody, Matt Jackson, Nick Jackson, Kenny Omega, CIMA, Brandi Rhodes, Allie and many more. Proceeds from the gate will benefit Jacksonville's Victim Assistance Advisory Council (VAAC), which coordinates cooperative efforts among social service, criminal justice, mental health and other agencies to provide assistance to crime victims and their families.

"We have a moral obligation to give back to the communities in which we live," said Eddie Farah, Managing Partner of Farah & Farah. "The fact that a mass shooting occurred here in Jacksonville just a few blocks from our office last year makes that moral obligation even stronger. We make it our mission to help protect injured people and their families, and supporting AEW's Fight for the Fallen is one of the ways we actively live out that mission. When we saw that the proceeds of this event would be used to support victims of crime and their families  connecting them with crucial supportive services  we had to be part of this."

"Eddie Farah started the firm in Jacksonville 40 years ago, and has been giving back to the community ever since," said Tony Khan, President and CEO of AEW. "Everyone at AEW cares deeply about the vibrancy and safety of Jacksonville, and we think that Farah & Farah is the perfect presenting sponsor of Fight for the Fallen as we all endeavor to raise money for the Victim Assistance Advisory Council."

Farah & Farah For 40 years, the personal injury law firm of Farah & Farah has fought insurance companies and corporations to protect the rights of injured people and their families. Farah & Farah has 15 office locations throughout Florida and Georgia, and has made recoveries in excess $1 billion. Under the leadership of managing partners, brothers Eddie and Chuck Farah, the dedicated team of attorneys and staff prioritize listening to the needs of clients, and treating all clients with dignity and respect. There are no out-of-pocket fees for Farah & Farah's services. If you've been injured in an accident, let Farah & Farah go to work for you. For a free review of your case, visit farahandfarah.com or call 1-800-HURT-247. Follow us @farahandfarah (Twitter), @farah_and_farah (Instagram), @FarahAndFarah (FB), Farah & Farah (YouTube), and farahandfarah.com.

All Elite Wrestling AEW is a new professional wrestling promotion headlined by members of The Elite (Cody and Brandi Rhodes, The Young Bucks, Kenny Omega and Hangman Page) and Chris Jericho. For the first time in many years, AEW is offering an alternative to mainstream wrestling, with a growing roster of world-class male and female wrestlers who are poised to bring new spirit, freshness and energy to the industry. The inaugural event under the AEW banner was DOUBLE OR NOTHING on May 25 in Las Vegas, followed by FYTER FEST on June 29 in Daytona Beach, FIGHT FOR THE FALLEN on July 13 in Jacksonville, and ALL OUT on August 31 in Chicago. For more info, check out @AEWrestling (Twitter), @AllEliteWrestling (Instagram), /AllEliteWrestling (FB), AllEliteWrestling (YouTube), and additionally, AllEliteWrestling.com.