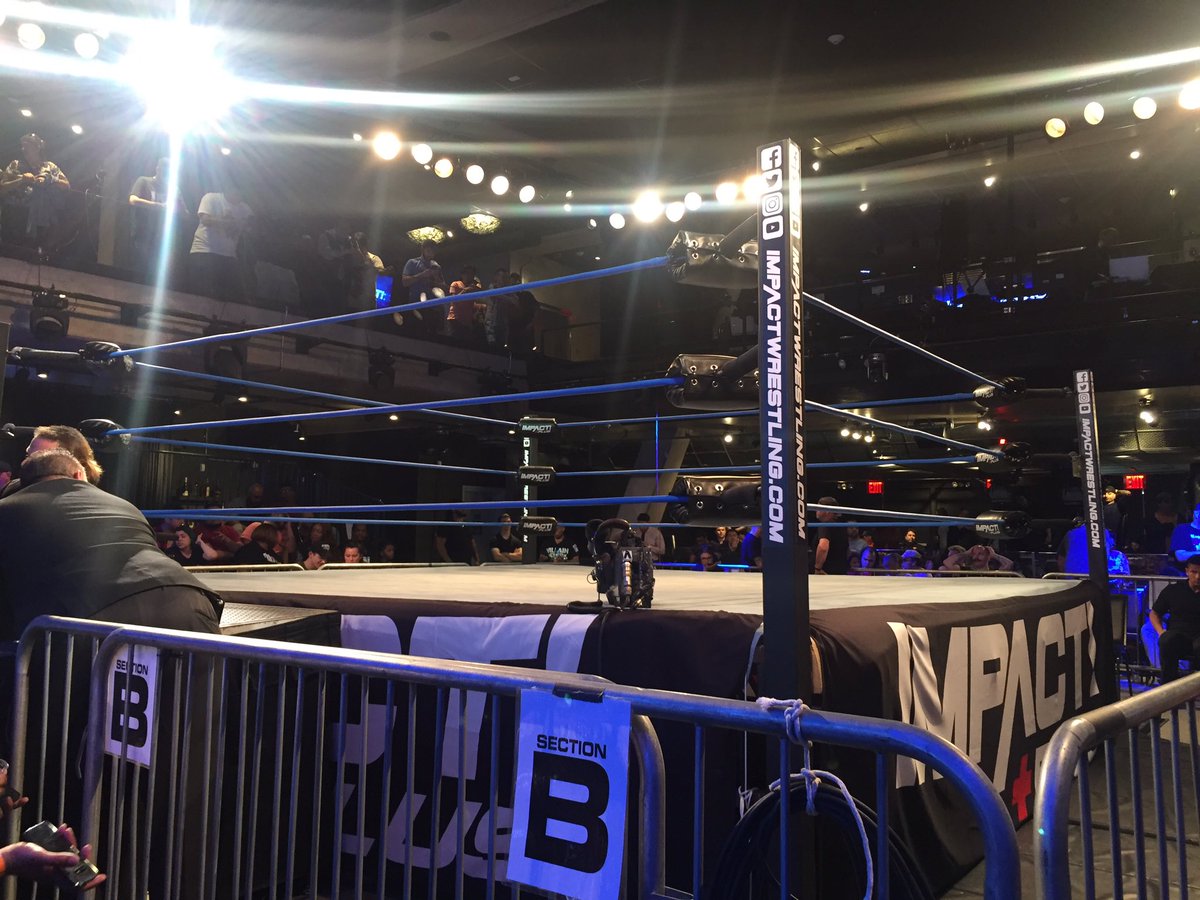 Thanks to MrEddyG for the following Impact Wrestling TV spoilers from tonight's tapings at the Melrose Ballroom in New York City:

* Rohit Raju defeated Shawn Donovan in a match for Xplosion. Donovan is from NYC and was playing the face. Raju with lots of choking in the ropes and did a snapmare using Donovan's long goatee-ouch! Rohit gets the victory in a decent opener.

* Michael Elgin defeated Willie Mack. Another solid hard hitting match. Elgin finally won with the Elgin Bomb. Excellent match! Elgin was about to give Wille another powerbomb, but Rich Swann fought him off. Johnny Impact arrived to help and took Rich out. Elgin & Johnny shook hands, but Elgin nailed Johnny with a German suplex. Elgin got a hold of Mack again, took him outside and gave him another Elgin-Bomb. He then got back in the ring and put on Johnny's shades before leaving.

* The North defeated Rob Van Dam and Sabu after Moose came down and pulled RVD outside. The North used this distraction to hit a Double Neutralizer on Sabu to win. After the match as Moose is celebrated on the ramp, Tommy Dreamer appeared and threw him back into the ring. Sabu got a chair and put it in front  of Moose's face as RVD was going to hit the Van-Terminator, but Moose managed to escape just in time.

* Havok squashed a local enhancement talent. After the match, Father James Mitchell worked the mic and said he will use Havok to get revenge on Su Yung. He said nothing will stop Havok from becoming the champion of the Knockouts Division. ?

* The Desi Hit Squad is next. This time Gama gets the mic and trashed NYC saying there were no apple trees, or anything else here. It's Raj Singh vs. Cody Deener (w/ Cousin Jake). Lots of interference from Rohit, and Raj gets the surprising victory. It appears the Desis are getting a bit of a push.

* Madison Rayne defeated Jordynne Grace. Before the action began, Kiera Hogan joined the announce desk. Hogan has a new, much better theme song. Jordynne hit a huge Muscle Buster for a very close near fall, but in the end Madison reversed a fire woman's carry into a "Roll The Dice" type move for another surprising win tonight.

* Killer Kross defeated The Sandman. Sandman used the kendo stick on Kross early, but Kross applied the Kross Jacket for the quick submission win. He refused to let go of the hold, and Eddie Edwards made the save. He handed  Sandman his kendo stick and they celebrated with beers, poured a few to some fans after (even the referee had some).

* "Undeniable" Tessa Blanchard defeated Jake Crist (w/ Sami Callihan). Jake got a lot of offense including a big Death Valley Driver for a near fall.? Tessa won with a rope Code Breaker. The rest of OVE appeared after the match and Sami is furious, smacking Jake around. Eddie Edwards arrived for some reason and fought with everyone, mostly with Madman Fulton. Fulton hit a big urange on the edge of the ring and threw Edwards inside and we have a match.

* Madman Fulton defeated Eddie Edwards. Fulton hit a massive chokeslam early. Eddie fought back with a German suplex  and got a long 2 count after a Blue Thunder Bomb. Eddie got a kendo stick and was about to use it. Killer Kross is on the screen. Kross has The Sandman kidnapped with a hood over him. He pours a jug of water onto him, which allowed Fulton to sneak behind Eddie and hit his finisher to win.

* Moose (who's wearing a beautiful gold and green robe) defeated Tommy Dreamer in a quick, but good match with "Go To Hell". Moose got a chair after the match and put it in front of Dreamer's Face and was about to do a Van-Terminator, but Rob Van Dam came out stopped him.

* Impact Knockouts Champion Taya Valkyrie retained over Su Yung by disqualification after Havok interfered. Good match until Havok interfered and got Su disqualified. Su was a bit upset at first. Father Mitchell got them to try and attack Taya, but Rosemary pulled Taya outside. James got a mic and proposed a 4 way Monsters Ball match with Su Yung vs. Havok vs. Rosemary vs. Valkyrie with the title on the line

* Ace Austin is out next. He plugs his t-shirts in the back, and said that he's still unbeaten. He says he's the future and will be the X Division Champion soon and issues an open challenge. Out comes the returning TJP.  ?TJP won a very quick match in his homecoming.

* Impact X Division Champion Rich Swann retained over Johnny Impact and Michael Elgin in the Triple Threat main event. Elgin hit a huge Double German Suplex early on, Swann hit a tope rope hurricanrana on Johnny landed onto Elgin. Swann won with a 450 on Johnny from the middle rope. As Rich is celebrating, Elgin tried a sneak attack, but Swann superkicked him down. Johnny Bravo came down and had the Ultimate X, and jabbed Rich in the stomach. Johnny got the X, and Elgin tried to take it, but Brian Cage's music hits. Cage nailed a big powerbomb onto Elgin and posed with the Impact World Title.

Pat Bailey contributed to this article.