- WWE posted this video with alternate angles of Cedric Alexander's big leap from the top of the LED structure at the end of this week's WWE RAW episode from North Little Rock, Arkansas.

It's rumored that Monday's SummerSlam go-home RAW will feature an eight-man match with Cedric, Roman Reigns and The Usos vs. Drew McIntyre, RAW Tag Team Champions Luke Gallows and Karl Anderson, and Samoa Joe, or they could add Ricochet and WWE United States Champion AJ Styles to make it a ten-man match.

- Baron Corbin and WWE Hall of Famer Billy Gunn had an Instagram exchange today after Corbin posted a photo of a Ferrari. Corbin actually re-posted the photo after blocking out the face of a child. Gunn, who works for AEW as a coach, called out Corbin and said the car was not his.

"You have to teach'em young why you bust your ass everyday! Had to redo the pic i forgot people inspect every inch for everything. #wwe #raw #ferrari #liarsclub," Corbin wrote with the photo.

Gunn: That is. Not your car

Corbin: come down I'll take you for a ride

Gunn: big guys like me won't fit. But thanks for the offer

Corbin: i was just trying to be nice to my elders. I wasn't actually going to take you.

Gunn: that's what I thought

You have to teach'em young why you bust your ass everyday! Had to redo the pic i forgot people inspect every inch for everything. #wwe #raw #ferrari #liarsclub 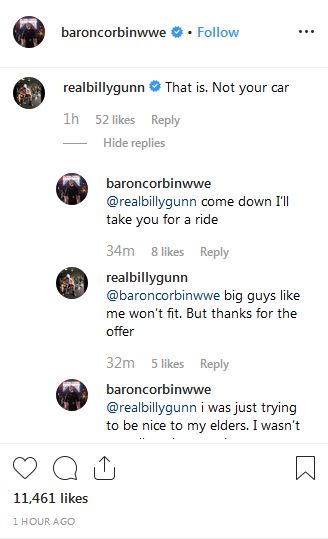 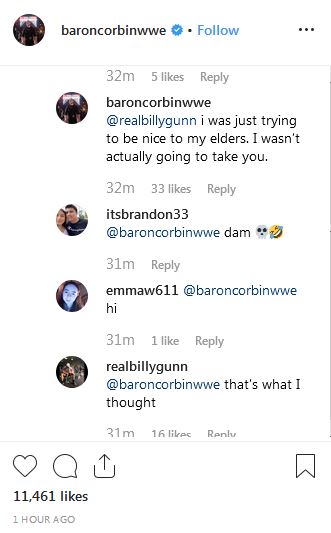