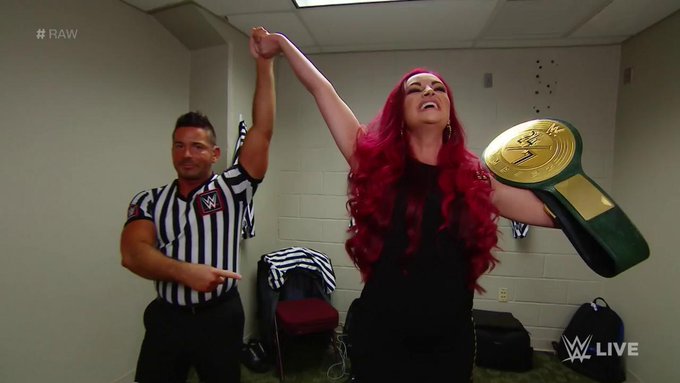 Maria Kanellis became the fourth woman to hold the WWE 24/7 Title after pinning her husband Mike Kanellis to win the title on tonight's RAW.

We noted earlier how Mike won the title from R-Truth following tonight's RAW opener, which saw Truth and Carmella retain the title over Drake Maverick in a Mosh Pit Mixed Tag Team match. Maria would later confront her husband in a backstage segment and demand that he lay down for her to take the pin. Maria then ran around the backstage area and bragged about being the first pregnant champion. She also told the Superstars that she will be at her OB-GYN appointment this Thursday, in case anyone wants to come pin her while her legs are up in the air in the stirrups. It sounds like they could change the title at the doctor's office this week.

Below are a few shots from tonight's title change at the Verizon Arena in North Little Rock, Arkansas:

FIRST. EVER. PREGNANT. CHAMPION.@MariaLKanellis just made @RealMikeBennett lay down for the count to become NEW #247Champion! #RAW pic.twitter.com/Ozc6vd6gf2

Well, that was a short-lived reign for @RealMikeBennett. @MariaLKanellis is the NEW #247Champion! #RAW pic.twitter.com/ek0cg6LJG0