How Many Tickets Were Sold For AEW On TNT?, Update On Tickets To Be Released, Stars React 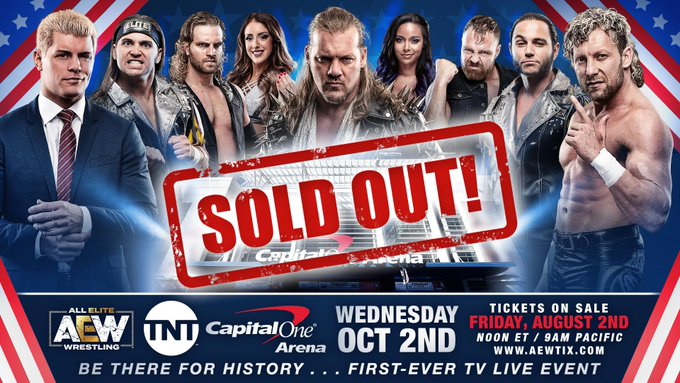 As noted, the first-ever AEW on TNT TV taping sold out within a few hours on Friday. Tickets went on sale at noon ET and AEW Executive Vice President Cody Rhodes made the sell out announcement at 3:14pm ET.

AEW sold more than 9,200 tickets over two hours, according to Dave Meltzer of F4Wonline.com. It was noted earlier in the day by Bryan Alvarez of Wrestling Observer Live that between 9,200 and 10,000 tickets were sold.

AEW has stressed on Twitter that more seats will be released inside the Capital One Arena as we get closer to the show and production is finalized. They are telling fans to keep checking for seats to be released. Meltzer reported that there will be around 1,000 more tickets released within the next week or so.

The scalpers were apparently ready for the tickets as there were around 2,000 tickets for sale on the secondary market at one point.

As seen below, Chris Jericho and Executive VP Nick Jackson both commented on the sell out.

Jericho wrote, "The debut show for @aewontnt SOLD OUT the @capitalonearena in 3 hours...and it is not a coincidence that #ChrisJericho was the centrepiece of every ad and promotion @allelitewrestling released for that show. So once again #AEW ...I want my thank you NOW!!"

"You guys keep helping us prove the doubters wrong. It's amazing! This shouldn't be happening but it keeps happening," Nick added.

The first-ever AEW on TNT episode will air live from 8-10pm ET on Wednesday, October 2 at the Capital One Arena in Washington, DC. Below is the current line-up:

* The Young Bucks and Kenny Omega vs. Chris Jericho and two mystery partners

* The first-ever AEW Women's Champion will be crowned

You guys keep helping us prove the doubters wrong. It's amazing! This shouldn't be happening but it keeps happening. #AEW

Please continue to check in via https://t.co/lZXODJGKNs & https://t.co/xD1UKLjrvj on a recurring basis as tickets may be released for sale for the 10/2 D.C. event between now and event date. pic.twitter.com/3X3KhU7YyD

Cody hit in on the head - check back for tickets next week after our production team gives us the AOK to release some production/camera holds! https://t.co/43Gc7DJ6DV