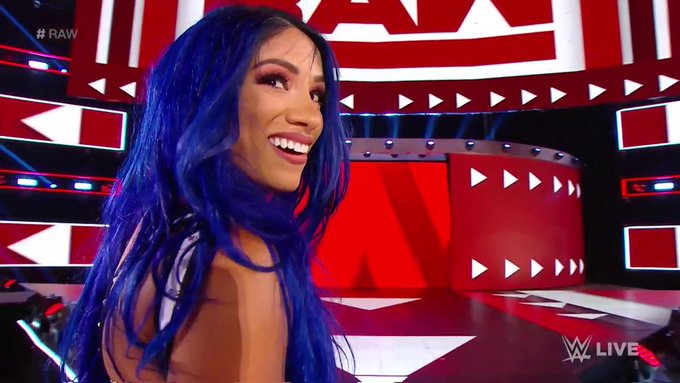 Sasha Banks made her long-awaited return to WWE TV on tonight's post-SummerSlam edition of RAW.

Banks returned during a segment where Natalya was talking about it being one year since her father passed away, WWE Hall of Famer Jim Neidhart. Banks hugged Natalya but then turned and dropped her with a right hand. Banks took off her purple wig and revealed new blue hair, then proceeded to destroy Natalya until RAW Women's Champion Becky Lynch ran down to make the save.

Lynch and Banks then brawled until Banks got the upperhand. The beatdown to Lynch involved several steel chair shots, tossing her into the barrier and the steel steps, among others. Fans chanted "thank you Sasha!" and "this is awesome!" at times. Banks left Lynch laying and then walked to the back.

Banks had been away since dropping the WWE Women's Tag Team Titles at WrestleMania 35. There were reports on Banks being unhappy, and at one point it was rumored that she was looking to sit out for the remainder of her WWE contract. It was reported in late May that Banks had met with Vince McMahon and the situation was improving, and that she would be back in the ring this summer.

It looks like the attack to Natalya may have been done to write her off TV for a few weeks. Natalya earlier mentioned that she suffered a dislocated elbow in the SummerSlam Submission Match loss to Lynch, and said she was to undergo an MRI tomorrow.

Below are a few shots from tonight's return at the Scotiabank Arena in Toronto:

IT'S BOSS TIME ONCE AGAIN.@SashaBanksWWE is HERE on Monday Night #RAW! pic.twitter.com/Pzk40lwmLl

It's a melee between @BeckyLynchWWE and @SashaBanksWWE on #RAW! pic.twitter.com/rypnQflAmL