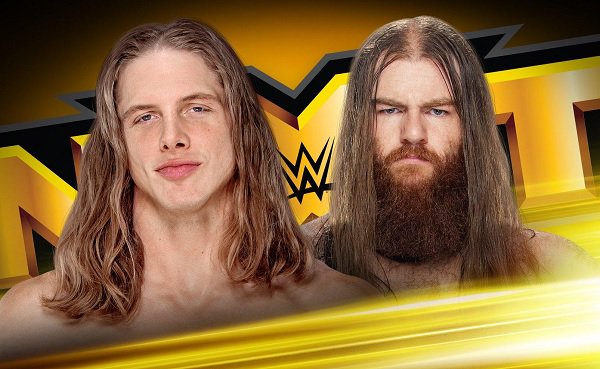 * The Undisputed Era comes out to start. NXT Champion Adam Cole says he did everything he said he would and he's the greatest champion NXT has had. Roderick Strong says they should all have gold, and says they got screwed. Roddy says NXT North American Champion The Velveteen Dream's title reign is on borrowed time. Kyle O'Reilly says to win a tag match, you have to pin the legal man. They pitch to video showing that Bobby Fish tagged in to the match at the end and Fish demands NXT General Manager William Regal come make this right. Cole hypes all three of them up and says they are two steps from fulfilling the Undisputed Prophecy. As Undisputed walks up the ramp, Jordan Myles comes out. Cole runs him down while Myles stands there, and after Cole trash talks, Myles hands him the contract he won in the Breakout Tournament before leaving

* Damian Priest defeated Mansoor Al-Shehail. Mansoor gets some fun Hope offense in, but gets leveled with a Razor's Edge and Priest hits the Archer of Destiny for the win

* Mia Yim defeated Vanessa Borne. Aliyah grabs Mia's foot for the distraction, allowing Vanessa to take control. Mia takes control back and hits a single-leg Codebreaker/Eat Defeat mashup for the win. After the match, NXT Women's Champion Shayna Baszler comes out. Shayna tells Mia she's badass and she took her to places she never had to go to win. Shayna says they don't have to stand on opposite sides. Marina Shafir and Jessamyn Duke surround the ring as Shayna proposes she join them. Mia attacks Marina and then gets laid out by the other Horsewomen

* Shane Thorne defeated Bronson Reed. Fun match. Bronson catches Shane on a leapfrog and powerbombs him. Thorne slides out of a gorilla press and takes out Bronson's knee. Shane with a cannonball but only gets two. Bronson fights back, but Shane rolls out of the ring. Thorne knocks Reed off the top turnbuckle and hits the running boot to the face for the win

* We go to a video package on Keith Lee vs. Donovan Dijakovic, discussing their paths here and how they crossed before they got here, including highlights of their EVOLVE match during WrestleMania 33 weekend and their previous Full Sail encounter. Awesome video package

* Killian Dain defeated Matt Riddle. Riddle jumps Dain from behind to start, but eventually gets overpowered. Riddle fights back and hits the Broton and the elbows, but Dain gets into the ropes and the ref pulls Bro off. Riddle with the ripcord knee, but Dain rebounds with a shotgun drop kick. Riddle catches Dain going for a running senton, and locks in a submission. Riddle misses the Floating Bro and gets thrown into the ring post. Dain charges the steps, but Riddle gets out of the way. Riddle goes to drop him on the steps, but Dain counters. Dain hits a senton on the stairs, a drop off the apron, and three Vader drops for the win. After the match, Riddle runs up the ramp and attacks Dain, and they brawl outside, ending with Dain doing a running senton onto Riddle on the concrete with a ladder on him

Will Henderson (@willh94) contributed to this article.