- Above is a clip from the latest WWE Network Hidden Gem addition, featuring WWE Hall of Famers Harley Race and "Superstar" Billy Graham doing battle at the Superbowl of Wrestling on January 25, 1978 from the Orange Bowl in Miami.

Four of NXT's top Superstars have been confirmed to join the latest edition of WWE Watch Along, which is set to stream live during SummerSlam on Twitter, YouTube and Facebook.

Cathy Kelley and Pat McAfee once again host the Superstar-studded hangout, to be joined by a revolving door of Superstars and celebrities during the pay-per-view. Confirmed to be joining the party so far are NXT Champion Adam Cole, NXT Women's Champion Shayna Baszler, Johnny Gargano and Matt Riddle. Also appearing will be former WWE Superstar Santino Marella, TikTok musician and influencer Nick Tangorra, and Jimmy Korderas, Caroline Szwed and Nug of Rogers Sportsnet Aftermath.

Even that lineup might look a little different come Sunday: Cole defends his title against Gargano in a 2-out-of-3 Falls Match at NXT TakeOver: Toronto on Saturday, while Baszler is slated to put her championship on the line against Mia Yim.

For the full experience, tune in to SummerSlam, streaming live Sunday at 7 ET/4 PT on the award-winning WWE Network, and fire up Watch Along on Twitter, YouTube or Facebook.

- WWE and DK Publishing have announced the new "WWE 35 Years of WrestleMania" book for Tuesday, September 3. The hardcover book features 256 pages and is a new edition of the 30 Years of WrestleMania book from 2014, with 32 pages of brand new content, including a foreword by WWE Hall of Famer Shawn Michaels.

The book will be available wherever books are sold but you can purchase it at a sale price via this link. Below is the cover art and the full press release sent to us by DK:

Chronicling every match and key moment across WrestleMania's history, WWE: 35 Years of WrestleMania is your up-to-date guide to WWE action both in the ring and behind-the-scenes.

35 Years of WrestleMania allows WWE fans to relive, or discover, the most exciting matches, celebrity appearances, and controversies in the event's storied history. The key matches of every WrestleMania are explored in depth with spectacular full-color photographs of unforgettable moments, vital stats, and quotes from WWE Superstars. Get ready for the greatest spectacle in sports entertainment!

About the Authors
Brian Shields is a New York Times Bestselling Author. Since 1998, he has worked with WWE on special projects, and partnered with Mattel, 2K Games, and Topps. Brian has written books for WWE and writes at the Friars Club in New York City where he enjoys membership.

Dean Miller is a former Director of Home Entertainment and Books at WWE. He is the author of DK's The WWE Book of Top 10s and a co-author of WWE: Everything You Need to Know and WWE RAW: The First 25 Years. 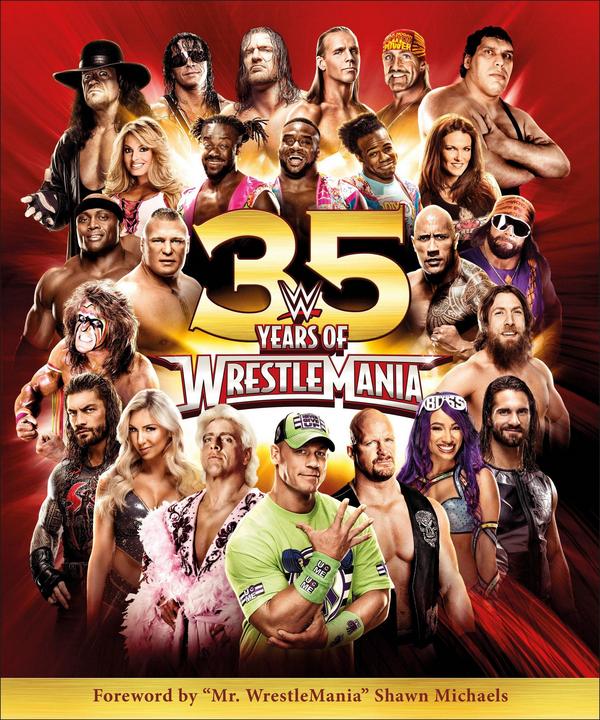 Previous Article
Charlotte Flair On How The Women's Locker Room Feels About Becky Lynch Sharing The WWE 2K20 Cover
Next Article
Jimmy Jacobs Talks Photo That Got Him Fired From WWE, His Crowning Moment In WWE