The full bracket for the 2019 WWE King of the Ring tournament has been revealed.

The tournament will feature RAW vs. RAW and SmackDown vs. SmackDown matches to kick things off. The first round will begin on Monday’s RAW from St. Paul, MN and Tuesday’s SmackDown from Sioux Falls, SD. The second round will begin on August 26 at RAW in New Orleans and SmackDown the next night in Baton Rouge, LA. The semi-finals will take place on September 9 and September 10 at the RAW and SmackDown events from Madison Square Garden in New York City. That is where the finalists will be confirmed. The finals will then feature RAW vs. SmackDown action, set for the WWE Clash of Champions pay-per-view on September 15 in Charlotte, NC.

Below are the matches:

First Round
* Cesaro vs. Samoa Joe
* Ricochet vs. Drew McIntyre
* Cedric Alexander vs. Sami Zayn
* The Miz vs. Baron Corbin

Second Round
* Cesaro or Samoa Joe vs. Ricochet or Drew McIntyre
* Cedric Alexander or Sami Zayn vs. The Miz or Baron Corbin

* Kevin Owens or Elias vs. Ali or Buddy Murphy
* Chad Gable or Shelton Benjamin vs. Apollo Crews or Andrade

Semi-finals
* Cesaro or Samoa Joe or Ricochet or Drew McIntyre vs. Cedric Alexander or Sami Zayn or The Miz or Baron Corbin

* Kevin Owens or Elias or Ali or Buddy Murphy vs. Chad Gable or Shelton Benjamin or Apollo Crews or Andrade

WWE has a high-resolution bracket that fans can download at this link. You can see the brackets below: 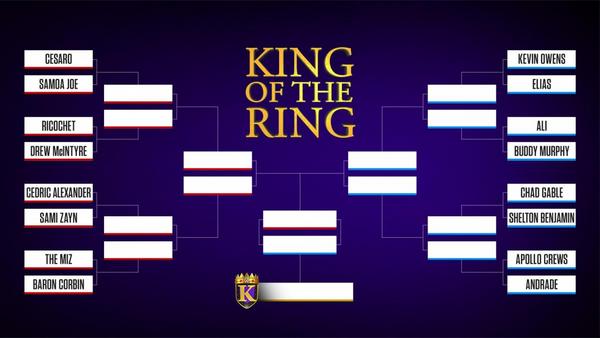 The 2019 #KingOfTheRing kicks off on Monday’s #RAW, and we now have the FULL BRACKET for the prestigious tournament. #WWENow pic.twitter.com/Gb9gLYXQRu