It was announced back in July that WWE veteran Big Show was set to begin working on his new Netflix show in Los Angeles on Friday, August 9. "The Big Show Show" is a live-action multi-camera family comedy series that will run for 10 thirty-minute episodes, also starring Allison Munn and kid actresses Reylynn Caster, Juliet Donenfeld, and Lily Brooks O'Briant.

According to information released over the summer, the show will focus on the teenage daughter of Big Show, a retired world-famous WWE Superstar, who comes to live with him, his wife and two other daughters. The big man quickly becomes outnumbered and outsmarted, and is no longer the center of attention.

In an update, Netflix is now offering free tickets for tapings on Friday, September 20 and Friday, September 27 at Paramount Studios in Los Angeles. Tickets for tapings on Friday, October 4 and Friday, October 18 will be available soon. This means The World's Largest Athlete will be in town for the October 4 SmackDown Fox premiere from the Staples Center in Los Angeles, which will also be the SmackDown 20th Anniversary show. WWE has not announced him for the special.

The ticket page at this link notes that audience members must be at least 10 years old. They included this description:

When the teenage daughter of The Big Show, a retired world-famous ex-wrestler, comes to live with him, his wife and two other daughtershe quickly becomes outnumbered, outsmarted and, despite being seven feet tall and weighing four hundred pounds, is no longer the center of attention.

Below is a photo of Show's TV family:

From @netflix and @WWEStudios, please come and be part of the audience for "The Big Show Show" in Hollywood, CA! Please visit the link for your free tickets! https://t.co/zbbXhSw91B pic.twitter.com/nyNJUjS0CP 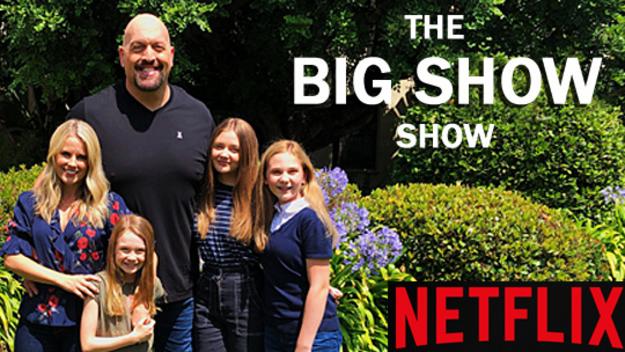