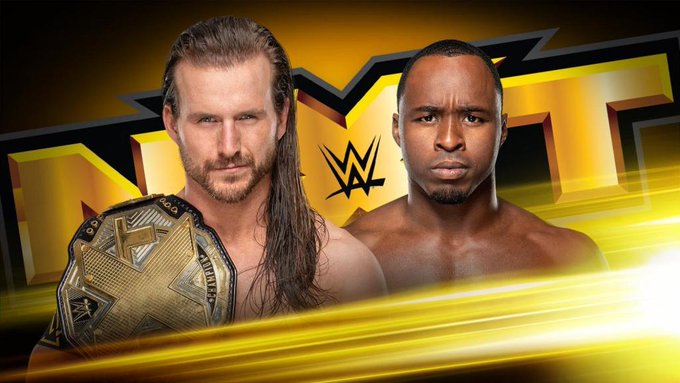 * NXT North American Champion The Velveteen Dream defeated Kona Reeves. Dream wins with the Dream Valley Driver. This was really a nothing match. After the match, Roderick Strong cuts a promo on the video screen to interrupt Dream. Roddy asks if Dream is ready for an experience with Roddy, and the camera pans out to show Dream's couch on fire. Roddy asks if he has Dream's attention now

* Breezango defeated Chase Parker & Matt Martel. Parker & Martel are Team 3.0. They work over Tyler Breeze for most of the match. Breeze gets the hot tag to Fandango, who runs wild, and they hit the elbow drop on the knees double team for the win

* Bianca Belair defeated Taynara Conti. Good exchange to start. Double knees in the corner by Belair. Taynara into an armbar over the ropes. Bianca slams Taynara on the floor. They both get in at 9 and charge at each other with Bianca getting the best of the battle. Bianca hits a forearm and the Belair Driver for the win

* NXT Champion Adam Cole retained over Jordan Myles, who was cashing in his NXT Breakout Tournament title shot. Cole with a side headlock to start, and he keeps going back to it to counter Myles. Myles with an armdrag, Cole backs him into the corner. Myles misses on the running apron kick and Cole pulls him to the floor. Cole in complete control. Jordan fight back after some Cole trash talk and runs wild, hitting a big crossbody for 2. Cole back in control, but misses a Panama Sunrise. Cole with a Figure 4 but Myles gets to the ropes. They fight on the top rope. Myles jumps off, but Cole kicks him out of the air and hits the knee brainbuster for 2. Myles with a tope and a frogsplash for a near fall. Myles catches a superkick and puts Cole down and hits a 450 for 2. Cole nails a superkick as Myles gets back in the ring, one to the back of the head, and the Last Shot for the win