The red brand quarter-finals of the 2019 WWE King of the Ring tournament were held on tonight’s RAW from Baltimore.

Baron Corbin defeated Cedric Alexander to advance to the semi-finals in the first match. The next match saw Samoa Joe vs. Ricochet end in a No Contest after both competitors pinned each other at the same time. It was then decided that next week’s RAW from Madison Square Garden in New York City will feature Joe vs. Ricochet vs. Corbin in a semi-final Triple Threat, instead of Corbin vs. Joe or Ricochet in a singles match. The winner of that Triple Threat will face a SmackDown Superstar in the KOTR finals at WWE Clash of Champions on September 15.

As noted, tomorrow’s SmackDown episode will feature blue brand quarter-finals with Ali vs. Elias and Chad Gable vs. Andrade. The winners will advance to the semi-finals at MSG next Tuesday.

Above is video from tonight’s Corbin vs. Cedric match, and below is video from the Joe vs. Ricochet situation with an updated look at the KOTR brackets. 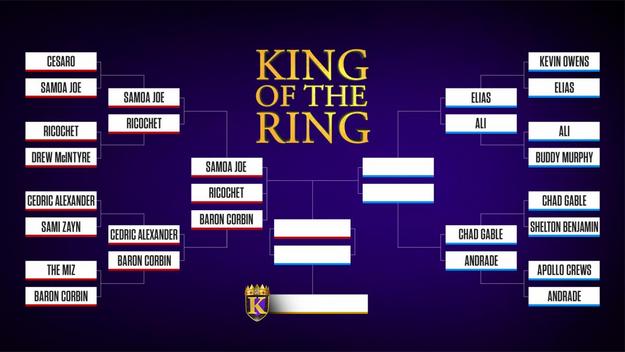