Luke Harper changed his Twitter bio this week after editing it several weeks back to apparently express frustration with WWE.

Harper edited his bio a while back and noted that WWE threatened to fine him.

"IG: @thislukeharper DMs are wide open. Wwe threatened to fine me but it's cool when nxt talent cusses on Twitter.... got it," the bio read.

Harper changed the bio just this week and removed the line about WWE threatening to fine him, adding that he's happier than ever. He also noted that his Direct Messages are still open.

Harper recently returned to WWE TV to team with Erick Rowan for the feud against Roman Reigns and Daniel Bryan. He had been away after a dispute with the company, and his future was up in the air. Harper has reportedly not signed a new contract. WWE reportedly added another 6 months to Harper's contract to make up for the time he missed for wrist surgery, according to the Wrestling Observer Newsletter. Harper's contract was to end in November of this year, but WWE has added to it because it was "frozen" while he was on the shelf.

Stay tuned for updates on Harper's status. Below are screenshots of the recent bio edits: 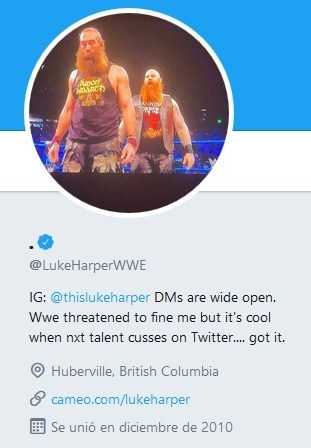 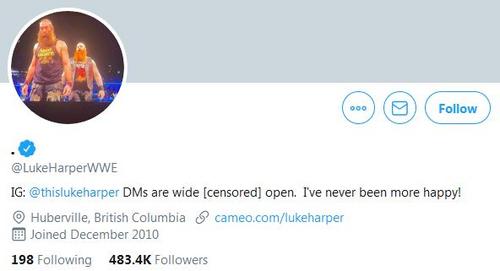