The WWE On FOX Twitter account has quickly become one of the most popular pro wrestling Twitter accounts since it was launched late last month, but many fans have called them out this week over a tweet they made about WWE Women's Tag Team Champion Kairi Sane.

On Monday the account tweeted a photo to promote last night's RAW, featuring Sane, Erick Rowan, WWE Universal Champion Seth Rollins, RAW Women's Champion Becky Lynch, and WWE Hall of Famers Ric Flair and Hulk Hogan. All of these Superstars had been announced for matches or segments on this week's RAW.

One fan responded to the graphic and asked, "Where are the people of color"

The WWE On FOX account responded, "What do you think Kairi Sane is?"

This led to controversy on social media, and the response was quickly deleted. For what it's worth, Google defines "person of color" as "a person who is not white or of European parentage."

"It was a bad tweet our on end. We shouldn't have even replied, or we could've used other examples like The Street Profits, R-Truth etc. But we just should've stayed quiet. Mistakes happen, and this was on us," WWE On FOX wrote on Reddit.

You can see a screenshot of the deleted reply (courtesy of Reddit user Moon8983) and the original tweet below: 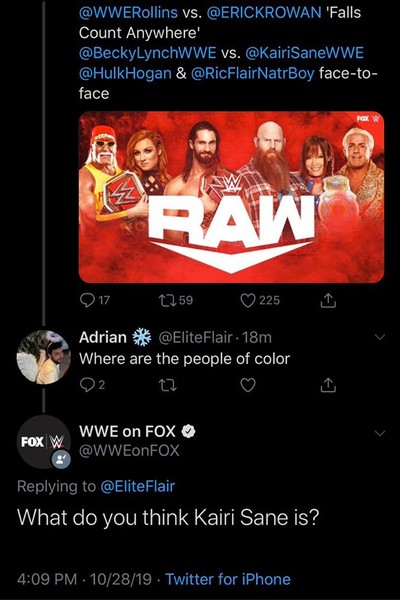