Lana Botches Her Promo On This Week's WWE RAW, Note On The Lana - Rusev Divorce Papers From RAW

Lana did botch her lines during the segment with Bobby Lashley on last night's WWE RAW from Boston.

For those who missed it, Lana revealed that she had just filed for divorce from Rusev earlier that day. Lana said she and Lashley just want Rusev out of their lives so they can move on. She also said she now has a temporary restraining order out against The Bulgarian Brute.

During her promo, which you can see above, Lana originally said Rusev can't come within 90 miles of her. Lashley tried to correct her and that's when she said she meant to say 90 days, which was another slip. She then finally got it right and said 90 feet. She blamed the error on Lashley making her nervous when he's around.

"And when Rusev landed in the United States of America this morning from the WWE European tour, he was offered and handed a temporary restraining order. Do you know what this means? This means that Rusev cannot come within 90 miles of myself," Lana laughed as Lashley corrected her by whispering in her ear. She continued, "I love when he corrects me. 90 days... I mean 90 feet. 90 feet, Rusev. You can't come 90 feet away from me."

Lana laughed again and continued, "I just get so flustered when he's [Lashley] around me. We want Rusev out of our lives forever because Bobby and I just want to be together forever."

On a related note, it's interesting that WWE used their real names for the divorce papers - Catherine Joy Perry and Miroslav Barnyashev. You can see a copy of the papers used on the big screen below: 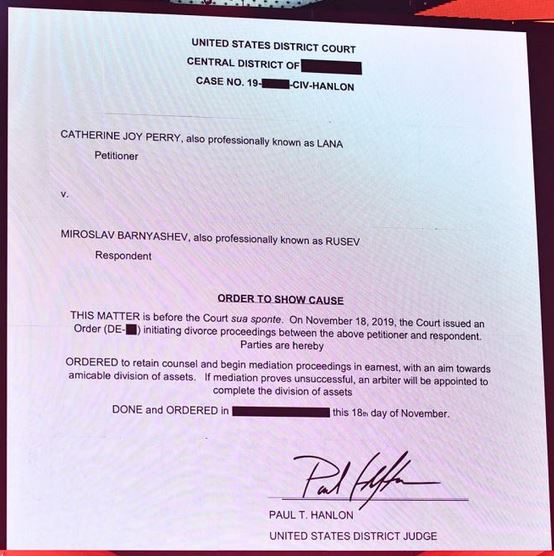