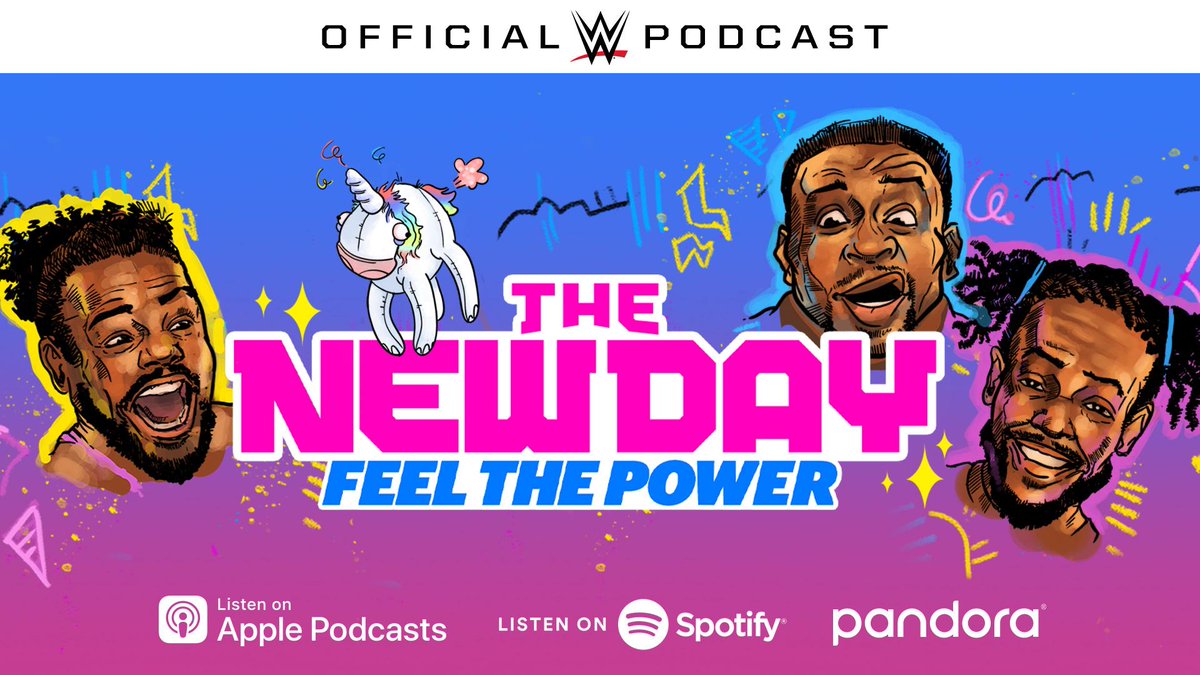 WWE has officially announced "The New Day: Feel The Power" as the second podcast from the new WWE Podcast Network.

As noted, the new podcast with SmackDown Tag Team Champions The New Day - Kofi Kingston, Big E and the injured Xavier Woods - was first confirmed during this week's episode of the "After The Bell" podcast with host Corey Graves.

The New Day's new podcast will premiere on Monday, December 2, right after Graves' next episode. All three members of the group will be on the podcast.

"Feel The Power is the perfect platform for us to take our engagement with fans to the next level," said The New Day in a press release. "Nothing will be off limits as we take listeners on a wild ride inside our lives."

Below is the full announcement on WWE's new podcast with The New Day, sent to us today:

WWE® THE NEW DAY: FEEL THE POWER PODCAST SET TO DEBUT ON DECEMBER 2

STAMFORD, CONN., November 20, 2019  WWE (NYSE: WWE) today announced The New Day: Feel The Power, a new weekly podcast series launching Monday, December 2. Hosted by The New Day's Kofi Kingston, Xavier Woods and Big E, the podcast offers fans an unprecedented connection to the seven-time WWE Tag Team Champions as they riff on their experiences from inside and outside the ring. Feel The Power joins After The Bell as the second podcast from WWE Podcast Network, a partnership between WWE and Endeavor Audio. Listen to the trailer here.

Each Monday, The New Day will share personal stories from their daily lives and engage in passionate debates as they cover some of their favorite subjects, including sports, video games, music and much more. Injecting the power of positivity into all of their takes, the charismatic trio will offer their unique perspectives on life as a WWE Superstar.

"Feel The Power is the perfect platform for us to take our engagement with fans to the next level," said The New Day. "Nothing will be off limits as we take listeners on a wild ride inside our lives."

Listeners can subscribe to The New Day: Feel The Power on all download and streaming services including Apple Podcasts, Spotify and Pandora.

Kofi Kingston, a native of Ghana and a graduate of Boston College, came into WWE with one goal in mind: to become WWE Champion. Kingston's 11-year journey of perseverance and positivity brought him the respect and admiration of fans around the world, so much so that the WWE Universe created a movement called #KofiMania which trended #1 worldwide and culminated with Kingston becoming WWE Champion at WrestleMania this past April. A dynamic and multi-faceted WWE Superstar, Xavier Woods holds two bachelor's degrees in psychology and philosophy and a master's degree in psychology. He is a lifelong video game aficionado and hosts his own YouTube gaming channel, UpUpDownDown, which currently has more than 2 million subscribers. Long before he was chanting "New Day Rocks," Big E was destined to command the spotlight. Big E was a state champion in high school wrestling and a standout defensive lineman at the University of Iowa. The former NXT Champion and WWE Intercontinental Champion is known for his infectious personality and invoking the message of positivity together with his New Day tag team partners.

WWE, a publicly traded company (NYSE: WWE), is an integrated media organization and recognized leader in global entertainment. The company consists of a portfolio of businesses that create and deliver original content 52 weeks a year to a global audience. WWE is committed to family friendly entertainment on its television programming, pay-per-view, digital media and publishing platforms. WWE's TV-PG, family-friendly programming can be seen in more than 800 million homes worldwide in 28 languages. WWE Network, the first-ever 24/7 over-the-top premium network that includes all live pay-per-views, scheduled programming and a massive video-on-demand library, is currently available in more than 180 countries. The company is headquartered in Stamford, Conn., with offices in New York, Los Angeles, London, Mexico City, Mumbai, Shanghai, Singapore, Dubai, Munich and Tokyo.