Punk used the harsh words when apparently responding to a line Miz said after Tuesday’s episode of WWE Backstage on FS1. Miz appeared in-studio on Tuesday night with Renee Young, Paige, and WWE Hall of Famer Booker T. As seen below, the WWE On FOX Twitter account tweeted a clip of The Miz talking to the camera as filming was wrapping up.

“Oh yeah, we are now done with WWE Backstage,” The Miz said. “They are taking the microphones off me. It was great, it was amazing. I feel like this was the best WWE Backstage episode ever. It was the best… was it the best-ever?”

Miz continued to chat back & forth with Renee and Paige over his episode being the best.

He said, “What do you mean in and around? Name one that was better. Name one.”

Renee named the first episode that had Ember Moon as the featured guest, which aired on November 19.

“Oh, sorry. I didn’t ‘change the culture,’ My bad. My bad,” Miz said, responding as if Renee had named Punk’s first Backstage appearance, which was on November 12.

As you may remember, Punk made a surprise appearance at the end of the November 12 Backstage episode, which was his first WWE-related appearance since 2014. He plugged his first official appearance, which took place the following week, and mentioned a line about changing the culture.

“It’s as simple as this, just when they think they’ve got the answers, I change the culture,” Punk said to the camera that night. “I’ll see you here next week.”

It looks like the line heard this week from The Miz is a reference to the line Punk made during his debut. You can hear for yourself in the embed below.

Punk hasn’t appeared on Backstage in several weeks, and will make just his third full appearance on January 21. FOX did make it clear when Punk was signed that he would not be appearing every single week, but most fans expected him to be on more shows than he has. This has led to a lot more criticism for Punk on social media.

The A-Lister has not responded to the tweet from Punk as of this writing, but stay tuned as we will keep you updated.

UPDATE: Punk deleted his tweet some time between 2am ET and 2:32am ET. You can see a screenshot of the tweet, and the video of The Miz below: 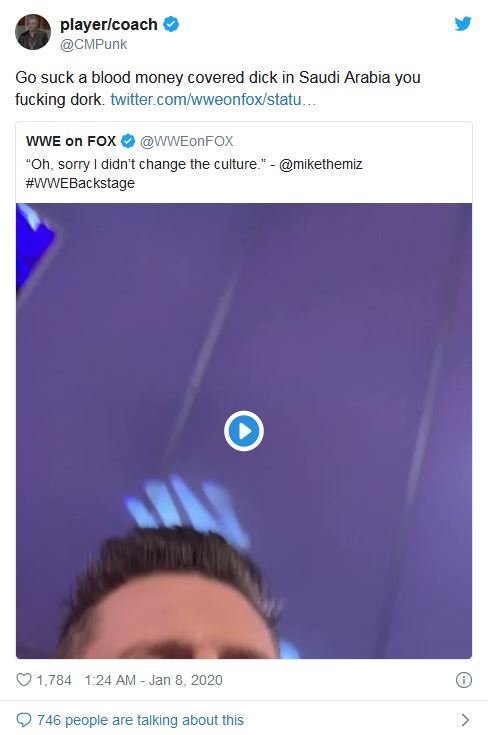