RAW Tag Team Champion Seth Rollins was forced to delete an Instagram Story plug for a friend and explain the post earlier today after WWE fans accused him of supporting the KKK.

Rolling took to Instagram earlier today and posted a mysterious graphic, which was to help plug a coffee advertising campaign for a friend. It looks like he was helping a friend plug their coffee company, The Caffeinati, as he also tagged that brand in another post.

Rollins quickly deleted the graphic, which you can see below, after fans claimed that the witches seen in the graphic were actually Klansmen because of the pointed hats they were wearing.

Rollins then took to Twitter to respond to a fan who insisted he was posting about the KKK.

The fan wrote, “Seth Rollins was one of the first white athletes to say ‘Black Lives Matter’ publicly. Y’all know damn well that wasn’t the KKK he posted.”

Rollins explained and wrote back, “It was witches….for a creepy coffee thing I’m helping a friend with. My apologies if anyone was confused. F the KKK. F racism.”

Rollins has not made any follow-up comments as of this writing. A surprising number of fans were tweeting anti-Rollins comments after the deleted graphic made the rounds on social media.

You can see Rollins’ full tweet below, along with a screenshot of the graphic that brought the heat:

It was witches….for a creepy coffee thing I’m helping a friend with. My apologies if anyone was confused. F the KKK. F racism. 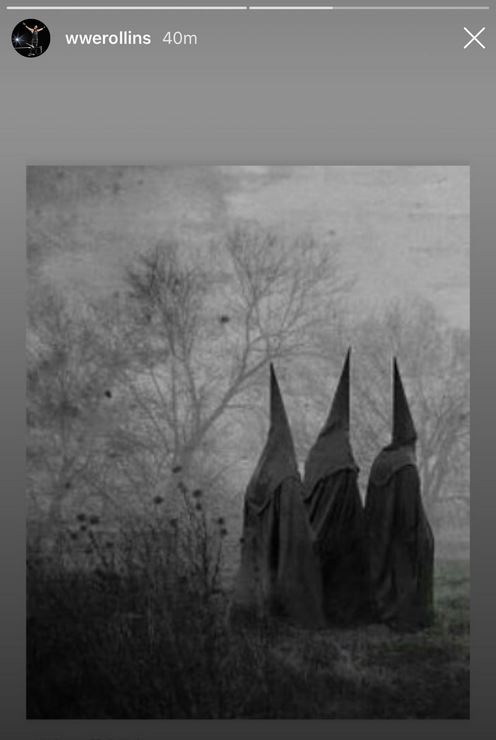 Doreen Hines contributed to this article.