Above is post-show video of Jon Quasto talking to Barthel and Aichner about their big win in the tournament, and their Fatal 4 Way Ladder Match at Sunday’s NXT UK “Takeover: Blackpool II” event with Flash Morgan Webster and Mark Andrews, the Grizzled Young Veterans (Zack Gibson and James Drake), plus NXT UK Tag Team Champions Wolfgang and Mark Coffey of Gallus.

“Tonight was the start of something big because with tonight’s victory against The Forgotten Sons, Imperium is going to start spreading our message from NXT UK through the entire NXT Universe,” Aichner declared.

– The WWE website posted a follow-up announcement on Alex Shelley’s big debut for the company today, noting how he’s done battle against various WWE Superstars, including Daniel Bryan, Seth Rollins and AJ Styles, among others.

As noted, next Wednesday’s NXT episode will see the first round of the Dusty Classic wrap as Shelley reunites The Time Splitters with Kushida, to face The Grizzled Young Veterans. The BroserWeights (Matt Riddle and Pete Dunne) vs. Andrews and Flash will also air next week to end the first round.

WWE posted the following on the big debut of the former Motor City Machine Gun:

The NXT Universe was in for a true surprise this week, when it was revealed that Kushida would be joined by his longtime friend and former tag team partner, Alex Shelley, in this year’s Dusty Rhodes Tag Team Classic.

For those who may be unfamiliar with him, Shelley is one of the most gifted and respected technical wrestlers of his generation, meshing the American, British and Japanese styles into his own unique offense. Boasting nearly two decades of experience in the ring, Shelley has competed with and against a number of current WWE Superstars, including Daniel Bryan, AJ Styles, Seth Rollins, Samoa Joe, Cesaro, Roderick Strong, Kassius Ohno, Kyle O’Reilly & Bobby Fish, The Viking Raiders and more.

And now, Shelley is finally making his way to WWE. How will he fare in his NXT debut when he and Kushida take on Grizzled Young Veterans in the 2020 Dusty Rhodes Tag Team Classic? Find out next Wednesday on NXT, live at 8/7 C on USA Network!

– Below is an updated look at the official brackets for the 2020 Dusty Classic.

Imperium will face the winners of The BroserWeights vs. Andrews and Flash, while The Undisputed Era will face the winners of The Time Splitters vs. The Grizzled Young Veterans. The finals for the Dusty Classic Cup would be Imperium or The BroserWeights or Flash and Webster vs. The Undisputed Era or The Time Splitters or The Grizzled Young Vets.

There’s no word yet on when the finals will take place, but stay tuned for updates. 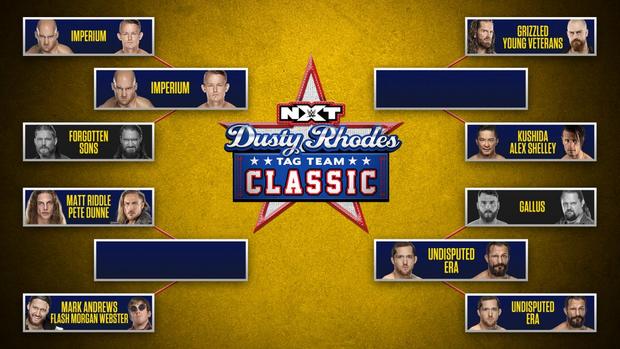 Previous
AEW Announces Another Match For AEW Dynamite: Bash At The Beach
Next
Sonya Deville On Her WWE Debut, Her Relationship Being Public On Total Divas