Indie star Chris Dickinson is set to make his MLW debut at the upcoming Intimidation Games 2020 event, which will serve as MLW Fusion TV tapings for beIN SPORTS.

Major League Wrestling issued a press release today to announce that the "Staten Island roughneck" will make his debut at their tapings scheduled for Saturday, April 18 in Chicago.

MLW's press release hyped Dickinson up as a powerhouse who backs up his big talk. The 32 year old has appeared for several promotions since debuting professionally in 2002, including EVOLVE, CZW, ROH, Dragon Gate USA, and WSU, among others.

"Chris Dickinson is tough as nails," they wrote. "A Staten Island roughneck known for crushing wrestlers on their heads with a variety of suplexes, Dickinson talks a big game and backs it up in the ring. A powerhouse wrestler, Dickinson is a tank in the ring known for taking his opponent's best yet continuing to march forward and unleash destruction. Bullying adversaries by imposing his strength, Dickinson is a challenge to many for his ability to quickly transition from power moves to technical wrestling only to overwhelm an opponent with a blitz of brawling. A hybrid wrestler of sorts, Dickinson is the master of the Pazuzu Bomb - a spectacular version of the Awesome Bomb into the turnbuckles. Promising a "one man chi-town rumble" on April 18, the punishing powerhouse Chris Dickinson now sets his sights on Major League Wrestling." 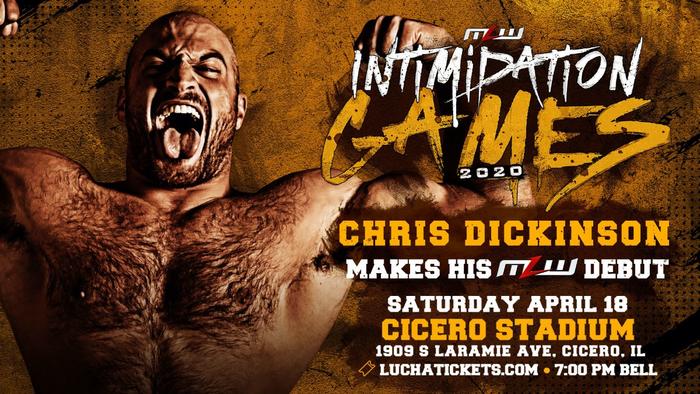