As noted earlier this week, it was reported that WWE had signed indie women’s wrestler Aja Perera, a former SHINE Tag Team Champion and a former SHINE Nova Champion.

WWE confirmed today that Aja, now using the name Aja Smith, has been signed to work as a referee. WWE touted the signing as their first full-time African-American female referee.

Courtesy of the WWE Performance Center channel on YouTube, above is new video of Aja at the WWE Performance tryouts held back in December. That video also features indie veteran Elaine Simon, who has wrestled and done referee work on the indies for almost a decade. Simon noted on her Twitter that she was not hired.

In the video above, the 25 year old Aja commented on what referees mean to the pro wrestling industry.

“Referees are really the unsung heroes,” Aja said. “They put in so much work and they’re seemingly invisible, but without them there would be no wrestling, honestly.”

The video includes a segment with WWE’s Senior Director of Talent Development, Canyon Ceman, telling an emotional Aja that WWE would be hiring her.

“This is the greatest moment of my life,” Aja said. “It’s something I never thought of, and just to think to myself, I’m going to be the first African American female referee in WWE, it’s just…”

Aja then recalled a message from her proud cousin, and talked about how she almost skipped a match last year to be with her sick mother. This could be when Aja and Big Swole (Team Aye) won the SHINE Tag Team Titles back in September 2019. She also won the SHINE Nova Title back in November 2018. Aja recalled how she promised her mother that everything she had done would not be wasted.

“The end of last year and into this year, I thought I was going to lose my mom,” Aja said. “I was in the hospital for a week and I stuck by her, and I had a championship match that was really, really important, and I wasn’t going to go because I firmly believe family is everything. She looked at me, even in the hospital bed, and she said, ‘Aja, you need to go. Life goes on, you need to go. I want you to go.’ And I went, and that night I won that championship, and I promised her at that moment, this is not wasted. I didn’t miss that day with her for nothing. I worked for this, I earned this, I deserve this. So, to finally have this moment, knowing I’m going to call her and she’s going to cry.”

The cameras then caught the moment where Aja called her mother to tell her that WWE was offering her a contract.

“Having this platform as a female, and a female of color, is really… it’s really an honor and I’m so thankful to be given this moment. OK, I’m done crying,” Aja said, laughing.

Below is WWE’s full announcement on Aja’s signing:

Smith competed across the United States, Japan and Mexico under the name Aja Perera, and has held the SHINE Nova and Tag Team Championship. She will now don the stripes and join the crew of referees who enforce the rules for NXT every week on USA Network.

For more on Smith’s journey to WWE, as well as a behind-the-scenes look at her tryout, check out the above video from the WWE Performance Center’s YouTube channel.

And for more info on the WWE PC, visit WWEPerformanceCenter.com. 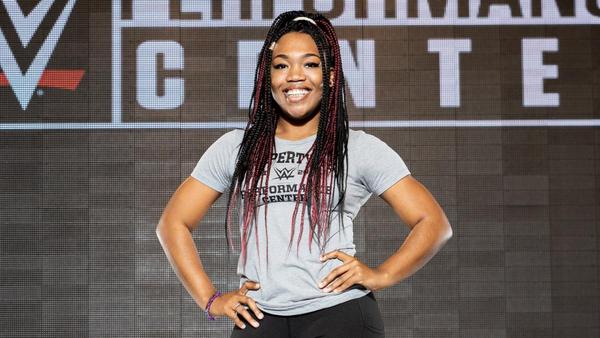