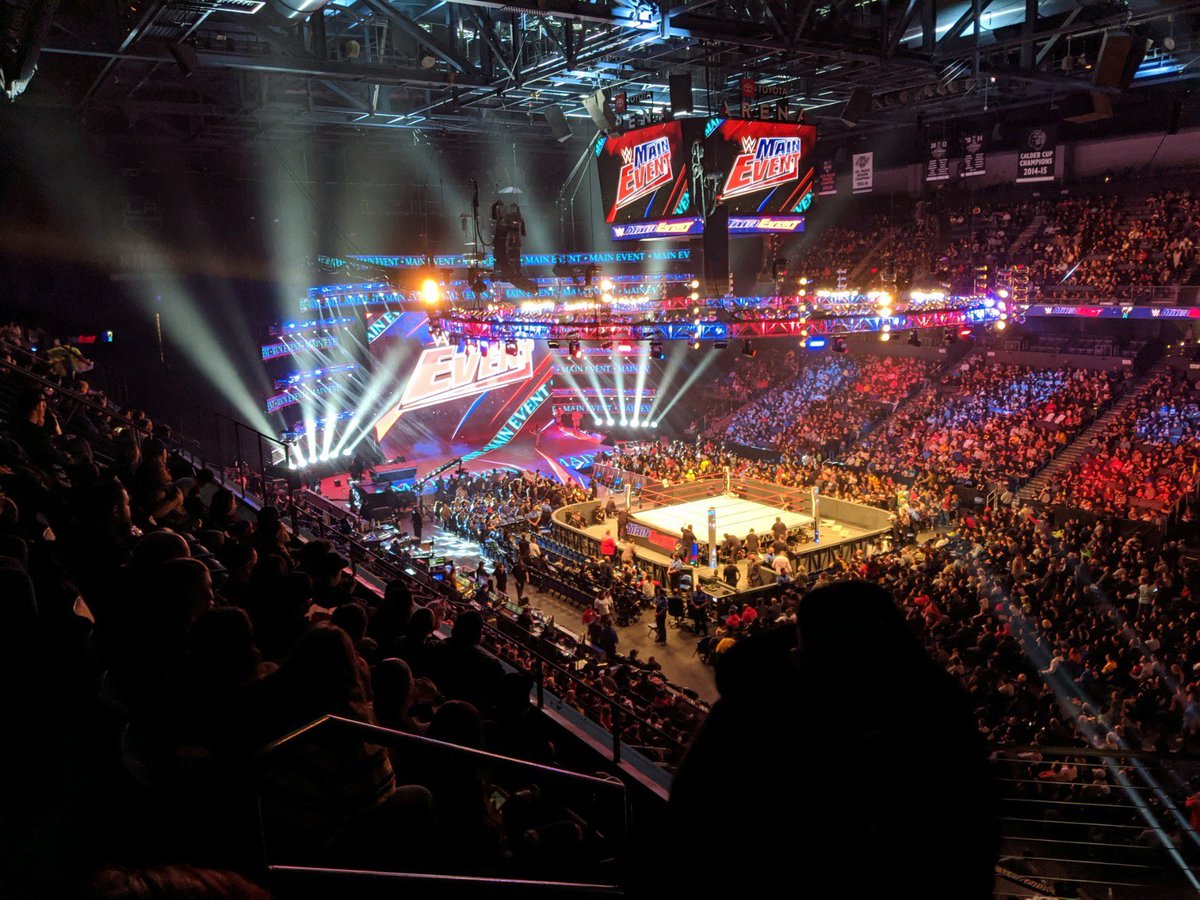 Thanks to Wrestling Inc. reader Brian Reed-Baiotto for sending these in-person notes from last night's RAW in Ontario, CA:

I've been to almost every WWE event at the Toyota Arena (formerly Citizens Business Bank Arena) in the last few years, and that includes Raw, Smackdown and house shows. Keep in mind, the Toyota Arena holds nearly 50% less people than that of the Staples Center in Los Angeles and the Honda Center in Anaheim. With that said, approximately 85-percent of the seats were filled, except for the second level behind the cameras and on the east end of the arena, where they had two or three sections completely blacked out, because the enormous Wrestlemania sign would have obstructed their view.

I'm not sure how it came off at home, but the fans in attendance were into the show the whole night.

Before Raw came on the air, they had two Main Event matches (results are here)

When the show began, it went dark except for the screens showing highlights from the previous RAW's to set up tonight. During the opening video, Seth Rollins, Murphy and the AOP all walked down to the ring and it didn't seem like many people were aware of that until the lights came back on and they were standing in the ring.

The first match between Becky Lynch and Asuka was not only great, it had the crowd in it the whole time, which is not an easy task. When Lynch won, the crowd reacted like she had just won the Super Bowl.

After the match, when Shayna Baszler attacked Lynch from behind and at first, people thought she had punctured the neck of Lynch because of how much blood was on both Shayna and Becky. But not too long after that, the crowd seemed to all come to the same conclusion that Baszler had some kind of a blood packet, because the amount of blood seemed so improbable.

When MVP came out, he got a good reception. They went to complete darkness shortly thereafter for a commercial and during that break, the crowd chanted MVP for most of the time. But in a span of three minutes, MVP went from face to heel by insulting the crowd.

Drew McIntyre came out for the VIP Lounge hosted by MVP and received a very positive reaction. After their segment was over, McIntyre made his way up to the top of the entrance ramp and you could see the camera man, who was right in his face, tell him to turn around and point at the big screen where they walk out, and Drew obliged. Within seconds, they went dark, but in a sure sign that he's embracing the role of a fan favorite, he clapped and waved to the crowd as he walked off the stage and towards backstage.

The most awkward (at least to me) moment of night was Akira Tozowa walking out with an intense look on his face to battle Aleister Black. But you could see that defeated look on his face, because it seems he got no more than 10 people were cheering for him. To add insult to injury, as soon as the match was over, Aleister was set to grab the mic and talk, which he did, but with Tozawa down in the ring, referee Darrick Moore literally rolled Tozawa out of the ring off the edge of the apron and onto the floor, which did not look like a good landing at all.

The actual main event got a very large pop when Samoa Joe, Kevin Owens and one of the Viking Raiders simultaneously dove through the middle ropes to take a shot at Rollins, AOP and Murphy.

* That new titantron or whatever they call it now is not only bigger, and shaped differently, the quality of the videos played during TV breaks, and even during matches is such better resolution than the old one.

* Of all the video clips they did between commercials (Andre the Giant documentary, WWE going to entertain the troops and John Cena playing some weird game with fish on the Tonight Show with Jimmy Fallon), the only one that got as close to no response was a video from last week, where Goldberg told Bray Wyatt that he's next.