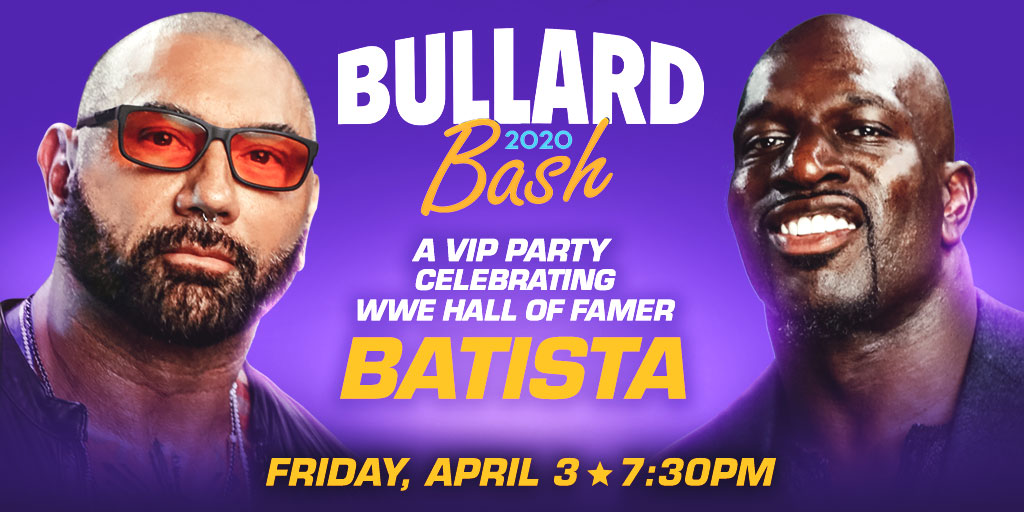 WWE RAW Superstar Titus O'Neil will be honoring his good friend, 2020 WWE Hall of Famer Batista, at a special event during WrestleMania 36 Weekend in Tampa.

Titus has announced the Bullard Bash 2020 for Friday, April 3 at the Florida Aquarium in Tampa, FL. The event is scheduled to run from 7:30pm ET until 1am.

The event, hosted by Titus and his Bullard Family Foundation, will celebrate the career of Batista, who will be inducted into the WWE Hall of Fame the night before. There will be a SmackDown on FOX Watch Party from 8-10pm, food tastings and drinks from top Tampa Bay Area restaurants, and a cash bar from 11pm until 1am. VIP ticket holders will also receive all-access to the VIP lounge with premium food and drinks. Titus is also advertising live entertainment and appearances by WWE Superstars, including Randy Orton, Big Show, Cesaro, Natalya and others.

Tickets can be purchased at this link. VIP tickets are $350 while General Admission tickets are $200 for Day Of tickets. Early Bird pricing, from now until March 6, is $125, and Advanced pricing, from March 7 - April 2, is $150 per ticket. The event is open to ages 21+ and the attire is casual.

Below is a promo with Titus and Batista, along with WWE's tweet promoting the event:

Join us for this VIP event!
Celebrating My Career and My @WWE HOF induction
All proceeds benefit these nonprofits:@frankies_friend
Because of Jason@floridaaquarium @BGCA_Clubs @WrestleMania
Purchase Tickets at https://t.co/KFq7ib7v3Y pic.twitter.com/S9mpn4hD3F

Join @WWE Superstar @TitusONeilWWE in celebrating the career of @DaveBautista at @floridaaquarium on Friday, April 3!