WrestleMania 36 Matches Revealed For Each Night?, Note On Locations 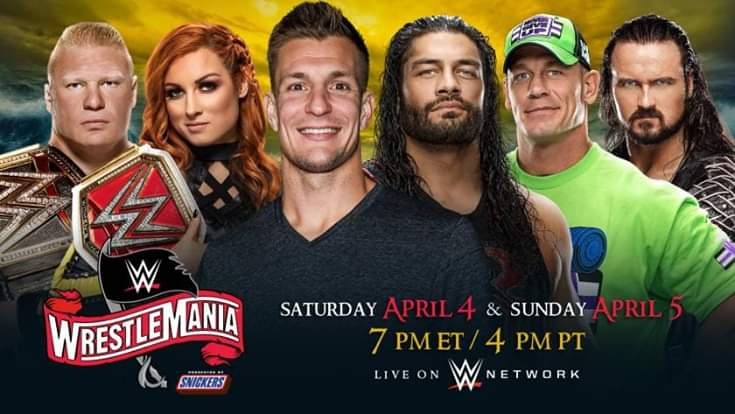 As noted, WWE has announced that WrestleMania 36 will air as a two-night event from multiple locations this year. The show will air on Saturday, April 4 and Sunday, April 5 at 7pm ET, via the WWE Network and pay-per-view. NFL star Rob Gronkowski will be the host of both nights.

We know one of the locations will be the WWE Performance Center in Orlando, and that there will be no crowd, but WWE has not announced the other locations as of this writing. PWInsider notes how the two nights and multiple locations will actually make production easier for WWE as they have been very careful about only having a certain number of talent and staff on hand at the recent Performance Center tapings. It was also noted how the multiple locations will allow WWE to switch from place to place, to keep the broadcast from looking and feeling monotonous. This will also allow WWE to tape some content ahead of time, even matches, to insert into the live broadcast. The closed set could make it easier for WWE to avoid spoilers from the pre-taped content, but that's not always a given.

Regarding the multiple locations, WWE has a few options including WWE HQ and TV studios in Stamford, and the Performance Center's 3D Suite, which would allow WWE to have matches in front of any 360 degree computer generated background. It was speculated that WWE could also try and lean on their relationships with FOX and NBCUniversal for help in finding locations for The Grandest Stage of Them All.

It should be noted that WWE has not confirmed which matches will air on what night or from which location, but the WWE website has been updated to show different nights for the 7 matches that have been announced as of this writing. The website lists the following matches for Saturday and Sunday, but the Performance Center is listed as the location:

Again, it should be noted that WWE has not officially announced line-ups for each night. It will be interesting to see if line-ups for each night will be issued as more matches are expected to be announced over the next few weeks. Randy Orton vs. WWE Hall of Famer Edge in a Last Man Standing match, which is not official until Orton responds to the challenge on Monday's RAW.

There should be a lot of new WrestleMania 36 details confirmed over the next few weeks now that they have the initial changes locked in. Triple H noted on tonight's NXT episode that this year's WrestleMania will be like nothing we've ever seen before. He said to trust him because he knows what's coming our way and WrestleMania will be one to remember this year.