WWE has issued a Cease & Desist letter to Freelance Wrestling over their “In Our Warehouse” logo, which is similar to WWE’s old “In Your House” logo.

“Looks like the crack legal team over at WWE sent out another cease and desist. This time to @FreelanceWres over their ‘In Our Warehouse’ event. Apparently that’s going to hurt all their In Your House WWE Network views. Petty af. Damn the man, save the empire,” he tweeted.

It’s interesting that WWE’s C&D came less than 24 hours after SmackDown Superstar Mustafa Ali tweeted a big plug for the Freelance indie promotion. The promotion announced earlier this week that they were going to run empty arena shows with an option for fans to PayPal money to wrestlers as a way to help talents earn money amid the ongoing coronavirus pandemic. The shows were announced to stream on IndependentWrestling.TV, airing from the Freelance Wrestling Academy that is hosted inside the Pro Wrestling Tees warehouse in Chicago, where Ali is from. Ali tweeted a plug to Freelance and declared that he would be making a donation to cover all performers for the first “In Our Warehouse” event.

While Ali’s tweet is still live, the original Freelance tweet has been deleted as it featured the “In Our Warehouse” logo.

Ali re-tweeted that now-deleted post and wrote, “Scary times only exist when you feel like you’re on your own. I’ll be donating to cover all of the performers pay for the 1st event. I encourage anyone that is in the position to do so, please donate and allow these incredible artists to perform for you. @FreelanceWres is home.”

While this may not be related, Ali took to Twitter this afternoon, shortly after news of the C&D came out, and posted a cryptic message.

“Just wait,” he wrote, attaching a photo of himself from SmackDown.

Freelance will now air “Warehouse Wars” instead of the “In Our Warehouse” event. Details can be found below. You can also see the related tweets from Blanton and Ali below, along with a screenshot of the deleted post from Freelance, and a look at the logo they were using: 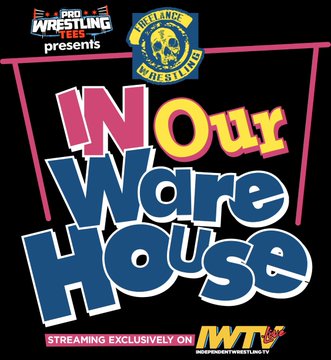 Please RT to get the word out for this event.

Looks like the crack legal team over at WWE sent out another cease and desist. This time to @FreelanceWres over their “In Our Warehouse” event.

Apparently that’s going to hurt all their In Your House WWE Network views.

Petty af. Damn the man, save the empire.

We will feature live matches & give fans the opportunity to support wrestlers live. Details below & Link set up @ https://t.co/cwB8xqLyyM pic.twitter.com/kp98VAVgEe 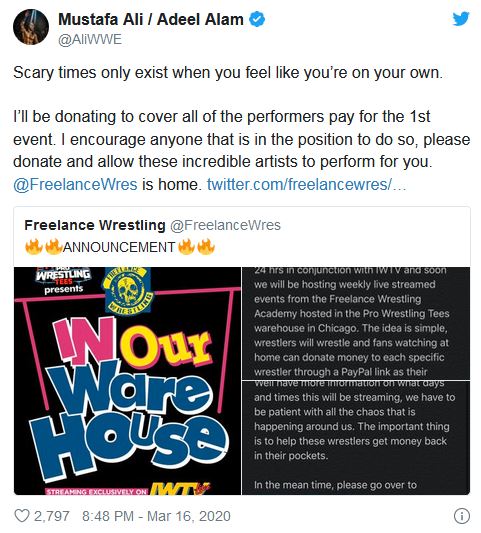 Previous
ROH Cancels All Upcoming Events Through May Due To The Coronavirus Pandemic
Next
"AEW Dark" Video And Results (3/17): Christopher Daniels Vs. Stu Grayson, Riho In Action, TH2