WWE On Why The Undertaker Is Feuding With Dr. DisRespect (Videos) 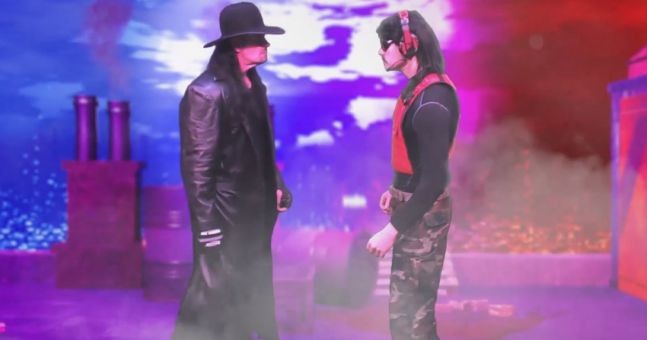 As noted over the weekend, The Undertaker made a surprise appearance during a Twitch stream from Dr. DisRespect, a popular streamer on the platform that has done some work with WWE in the past.

Taker interrupted Dr. DisRespect's Overwatch stream and issued a warning: "I have no patience for the two-time. WWE is my domain, my yard. Your transgressions will be punished. Dr. DisRespect, you will rest in peace."

WWE revealed that the "integration" with Taker and the two-time Twitch Streamer of the Year was sponsored by G FUEL, the official energy drink of Esports.

WWE also pointed to how the dispute between Taker and DisRespect stems from Disrespect's appearance at the SmackDown FOX premiere at the Staples Center in Los Angeles this past October. As seen in the WWE Now video below (around the 3:00 mark) from that night, DisRespect crashed the WWE Now set and claimed to be "looking for someone." WWE noted that Taker didn't take too kindly to the visit to SmackDown, so he returned the favor by showing up unannounced during Friday's stream.

You can see the related posts and videos below, along with the threat back to Taker from Dr. DisRespect, which was hashtagged with the mandatory "#ad" tag to show a sponsorship deal:

"I heard you were looking for someone."

Grave words were exchanged when @drdisrespect faced @wwe legend, The Undertaker at The Arena. pic.twitter.com/TG5KxOHBdq

Yesterday, the arena was jam packed for Overwatch placements.

Today, I'm going to get to the bottom of this.

This ain't over @WWE #ad pic.twitter.com/nH11bn30gU