“This is life with coronavirus now.”

For the first time in living memory, Times Square has reached an equilibrium with the ocean surrounding the Isle of Manhattan. It sits, streets as devoid of human life as the haunting opening of George A. Romero’s Day of the Dead ? just like every major metropolitan area the world over.

It is the nearby borough of Queens that Ann Khozine, 21, calls home. Born in Moscow and possessing dual US citizenship, last summer she earned a degree in criminal justice ? but she is interested in nothing save for professional wrestling.

Ann wrestles under the nom de guerre of Masha Slamovich. On her left ring finger, she has a tattoo that she likens to a wedding band. It reads WOE, an acronym for Wrestling Over Everything. Why? “Because I’m married to the ring,” she reveals matter-of-factly. “Not a lot of people know what it means to sacrifice for this business. I’ve given up everything for it, even my last relationship of three years. People joke that if anyone ever makes me love them as much as I love wrestling, they can add a ring.”

On January 25th, she arrived for her second tour of Japan. It was her first time with Joshi promotion Marvelous That’s Women Pro Wrestling [sic]. Masha was scheduled to fly back to the United States on April 1st, which would have been her first time performing at the yearly festival of independent wrestling events surrounding WrestleMania ? all of which were subsequently canceled due to the COVID-19 pandemic.

Unable to safely return home to New York City ? currently the world’s epicenter of the coronavirus outbreak ? it is in the city of Funabashi in the Chiba Prefecture of Japan that Masha currently resides in limbo. 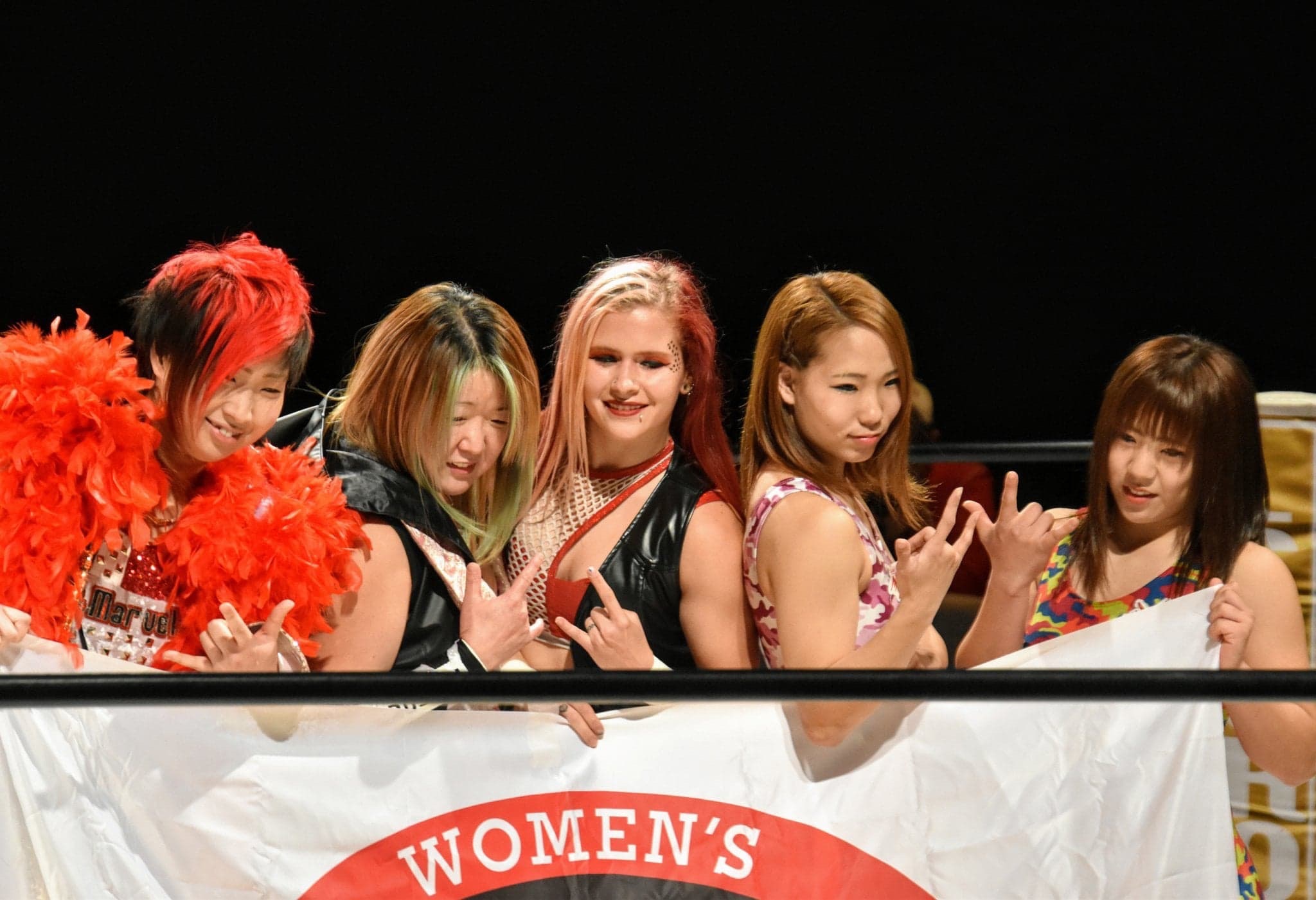 A student of WWE Hall of Famer Johnny Rodz, Ann began training at the age of sixteen, which she commemorated with another tattoo: 11-22-14 sits below a literal squared circle ? the first date she ever stepped foot in a ring: “I was there six-plus hours a day. Six days a week. Sometimes seven.” The following year, at the age of seventeen, Ann had to get a fake ID in order to have her first match. (It is illegal to wrestle in New York under the age of eighteen.)

Placing the underappreciated artwork of mat wrestling at a premium, she adopted the nickname “Russian Dynamite” in tribute to her in-ring role model, the late Dynamite Kid. Aiming to match his sensational intensity, Masha’s fierce, no-nonsense demeanor belies her irreverent and at times self-deprecating sense of humor: “I was always really into shooting and mat wrestling. So I would try to shoot with everybody. Try to tap them out. And that not only helped build my wrestling skill, but my personality as well.”

Life abroad is nothing new for Masha. By the time she reached the age of majority, one of her wrestling school’s connections enabled her to tour Japan with Joshi company REINA. There, she trained at the renowned ZERO1 Pro Wrestling Dojo: “I couldn’t even believe what was happening? Start your career in Japan. That does not happen. Ever. To anybody.” A globetrotter, since then she has competed in ten US states, Canada, Puerto Rico, the Dominican Republic, and her native Russia ? plus a televised appearance with Impact.

She’s going to be a star on work ethic alone. Keep it up!

Growing up, Ann had a slight case of nosophobia: “My whole life, I don’t know, I just feared that the Black Plague would return and kill everyone.”

In the opening months of 2020, it began to feel as if her prognostication was coming startlingly close to realization. Her anxiety level was high in January as she prepared to embark to Japan. Like many of us, the issue existed only in her periphery with scant details: “I started hearing people were dying in China from this weird new virus.”

During a nine-hour layover in Taiwan, paranoia grew: “I sat in a corner wearing two masks, staying away from everybody.”

Her nerves eased and all worries abated upon arrival to her destination. As the disease began to spread globally, Japan maintained a record low of documented cases. Life seemed to be continuing as normal: “It all started in such a fantastic fashion. I was so happy to finally be back here.”

Unbeknownst to the public at large, a nightmare lay in wait.

In mid-February, despite being relatively unaffected by the novel coronavirus in comparison to the rest of Asia, Japanese promotions began taking the precautionary measure of canceling events. Borrowing from other sports, some promotions continued holding shows behind closed doors in dojos and even the revered Korakuen Hall. Overseas, WWE and AEW soon followed suit in order to maintain their weekly television schedules. 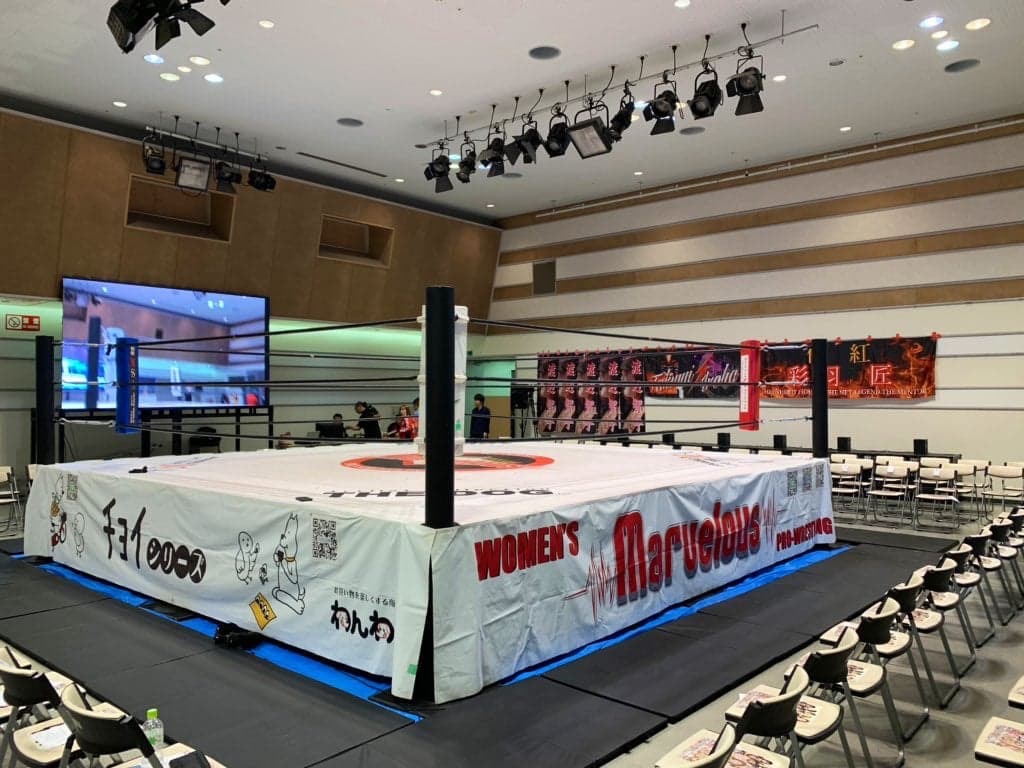 A month later, the wrestling world cheered as Japanese puroresu events began to open their doors once more: a definitive rallying point proving that life did, in fact, have an “after,” so far as this unprecedented course of events were concerned.

Masha recalled that in Japan during this time, all fans were disinfected upon entering the venue and masks were mandatory. Talent wore them as well during intermission and no contact was permitted. A reasonable price to pay for some semblance of normalcy.

Unfortunately, the celebration proved to be premature. As the Eurasian epidemic rapidly upgraded to a full-out global pandemic, Japan suddenly caught up: “I think it was March 26th or 27th that the Tokyo government reached out to wrestling ? everybody as a whole ? and asked them to postpone their events. Which started this whole train of cancellations.”

On April 7th, Japan entered a state of emergency.

Now, her visa renewed for three more months with no return date in sight, Masha remains in residence at the Marvelous Dojo, studying a puroresu curriculum under Chigusa Nagayo and Takumi Iroha. Every morning, she starts her exercise routine at a park across the street from the dojo: “It’s perfect. It’s so peaceful with open doors and windows. It’s full of new equipment, including a new ring,” which she and comrade Delmi Exo helped install earlier this month.

“Life is relatively normal from where I’m living.” She tells me that Funabashi reminds her of home: “It’s pretty calm ? students and families ? regular life here. It’s like Queens, whereas Tokyo is like Manhattan.”

An avid powerlifter, she laughs, telling me that she wants “to make it easier to toss people around.” Earlier this month, at 5’3″, 135 lbs., Masha pulled the strongwoman stunt of ferrying a massive van while it simultaneously carried the luggage of ten passengers, show equipment, and a driver: “It was real easy in neutral, so then we said, ‘hey… pump the brakes if you have to.’? I don’t know what’s in the food here, maybe it’s all the rice I’m eating. Let me tell you, I was not pulling vans when I was in America.”

After WrestleMania week, Masha was scheduled to spend May touring Canada. Afterward, Russia. “Now, I don’t have any reason to come home.” She explains, bittersweetly: “At least here I get to live a normal life. I get to work out every day and train every day. There’s absolutely no reason for me to go home and sit on my ass.”

Masha is trying to stay positive. Thankfully, her parents, who work in the hospital and public transit industries, respectively ? high-risk careers, so far as social distancing is concerned ? are safe, albeit due to being laid off.

In her most recent bout to date, from March 20th, she was able to work with her trainers, Nagayo-san and Takumi-san: “That’s probably one of the coolest moments in my entire wrestling career? I mean, hell, if that’s how I get to end the tour and that was my last show, I guess I’m happy with that.”

Life suspended indefinitely as we are all in search of a new normal, Masha is comforted by a hint of normalcy that most would kill for. When not weightlifting or running through her twice-daily paces of wrestling drills, she often spends her days with Marvelous housemates sightseeing or experiencing local cuisine. Consumed, Masha always inevitably returns to her self-described first and only love: “When I’m alone, I watch wrestling.” 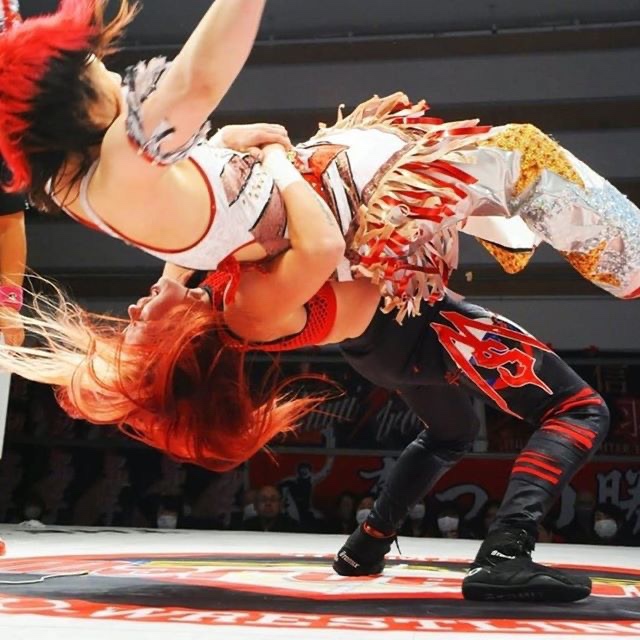 You can find Masha Slamovich on Facebook and other social media platforms at @MashaSlamovich. You can support her by purchasing a t-shirt at Pro Wrestling Tees.

Kris Levin is a traveling storyteller for Ripley’s Believe It or Not!, professional wrestling referee, and Locker Room Detective. He can be seen internationally on MLW, Game Changer Wrestling, and CHIKARA as pro wrestling’s most junior official, #KidRef, and on social media at @RefKrisLevin.

Full audio from this interview will be released on The Wrestling Inc. Daily later this afternoon.