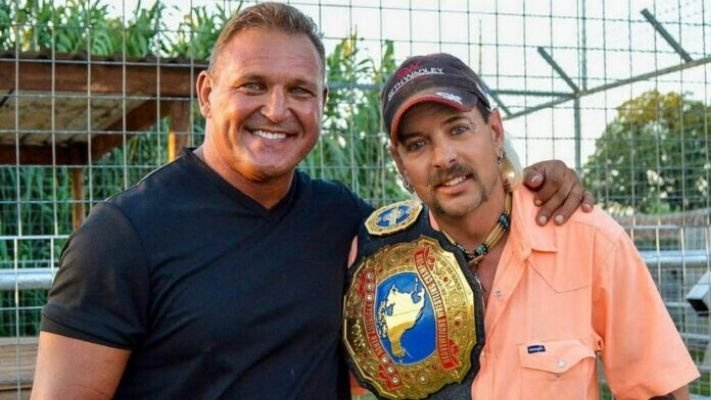 Of course there is a pro wrestling connection to Joe Exotic from Netflix's "Tiger King" series, which has been one of the hottest social media topics of discussion while people have been quarantined due to the coronavirus pandemic.

Joe was being compared to some wild pro wrestling character as soon as the series dropped on Netflix last month. Vice reports that Joe, real name Joseph Maldonado-Passage, actually once held ambitions in the world of professional wrestling. Joe occasionally held wrestling shows at his GW Zoo in Wynnewood, Oklahoma from 2014 to 2018, and served as a commentator on the shows, which featured tigers, wolves and fireworks.

Joe's run in the world of pro wrestling reportedly began back in 2010 when he met Texas businessman and indie wrestling promoter Robert Langdon at a charity event the zoo hosted. Langdon currently runs Texoma Pro Wrestling, which was then known as NWA Texoma. The promotion once featured stars like The Viking Raiders, Shelton Benjamin, Lance Archer, and Sammy Guevara, among others.

Langdon told Vice that he and Joe bonded over their ownership of exotic animals, and decided it would be mutually beneficial for Joe to do commentary on NWA Texoma shows, then stream the shows on his Joe Exotic TV. Their friendship grew to the point where Langdon walked Joe down the aisle for his marriage to his fourth and current husband, Dillon Passage. Joe did NWA Texoma commentary for more than three years. His work on the shows included fundraising pleas for his zoo, and TV time for his bizarre music videos.

"Joe knew nothing about wrestling. And we knew this," Langdon told Vice, adding that he paired Joe with two veteran announcers in the commentary booth. "We spent a lot of money on the show to make sure Joe looked professional."

A four-match event was held on a hot afternoon in October 2014, in the middle of Joe's zoo parking lot. Two years later during the July 4 weekend, they moved the NWA Texoma ring to the zoo itself for a "NWA Texoma Wrestling at the Zoo and Fireworks" event. Langdon also owned a fireworks stand in the area. That event featured former WWE star Charlie Haas and former NWA Heavyweight Champion Tim Storm, who also worked the October 2014 show.

It was estimated that between 20 and 45 fans attended that event. It was noted that they had WrestleMania-quality pyro for an event where there was just a few fans and mostly unknown indie names. Tigers roared nearby and wolves howled in the distance as the show went on. Wrestlers were given free rein of the zoo to interact with the animals while the grounds were mostly quiet and without fans. The locker room was set up on an outlook gazebo where zoo visitors would view the tigers. It also looked the pizza stand, which was featured in the Netflix show as it was alleged that expired meat from Walmart was cooked and fed to the tigers.

The main event of that show with Haas featured the former WWE Tag Team Champion vs. indie star Moonshine Mantell. At the end of the event, which streamed online, Joe lip-synched a country song about the infamous Carole Baskin, who has been the subject of many memes since she was also covered in the Netflix show. There was also a two-hour firework show after the matches ended.

"Anywhere that we can try to put on a show, we're gonna try to do it, but the most outrageous one is doing it at the zoo. It was really different. We didn't pull a large crowd, so I kinda lost my butt on it. But it wasn't about the money; it was about the animals," said Langdon.

As covered in the Netflix show, Joe's life unraveled in 2018 after legal and business troubles. Joe reportedly turned to Langdon for help, posting a tearful farewell video to Facebook, from the back of the stretch limousine that was in Langdon's name, and then set off to start a new life. That video has reportedly been scrubbed from the internet. Langdon said he offered to let Joe and his husband live on 20 acres of land he owned, offering some space for a few tigers as well. Instead, the couple took their 4 dogs to a Motel 6 in Pensacola, Florida, and Joe started working s a dishwasher and bartender.

"Three or four months later, I get a call that Joe had been arrested," Langdon recalled.

Joe was eventually arrested and convicted on 17 federal charges of animal abuse, and 2 counts of murder for hire, for the plot to kill Baskin. He is currently serving a 22-year federal prison sentence.

Langdon's indie company is still running after 13 years and all of the shows Joe worked on are still available on Joe's YouTube channel. Langdon noted that the shows and their performers are enjoying extra attention these days thanks to the massive success of the Netflix series. He called it his WrestleMania moment.

"It's become like the coolest thing I've ever done in my career," said indie wrestler Jaxon Stone, who wrestled Storm on that show with Haas. "It's my WrestleMania moment, baby!"

The NWA published this video of Storm discussing Exotic. Also below are videos from some of the shows held at the zoo: